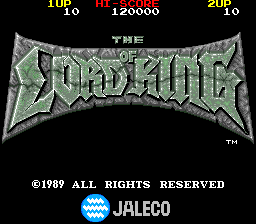 In The Lord Of King, you play some beardy dude who pulls a magic fire axe out of a stone, becoming, in the process, a king. But not just any king. Oh no…

You’re the Lord of King! Gooowaaaaarggghhh! 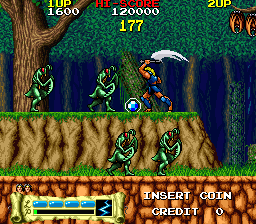 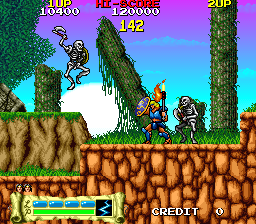 The rest of the game sees you waddling about hacking at weird mantis-creatures, skeletons, cruel wingéd gargoyles and a few fire-belching end of level bosses in an awkward and tedious chop-a-thon, the even timbre of its dullness undisturbed by a single moment of enjoyment from beginning to end. The control system is a piece of shit, your fire-axe takes way too long to charge up to be of any use in a melee, the difficulty curve goes piss-take exponential somewhere around Level 3, and the music is so unatmospheric they might as well have pressed a Casio keyboard’s demo button and let you cleave giant bats to an instrumental version of ‘Wake Me Up Before You Go Go’. 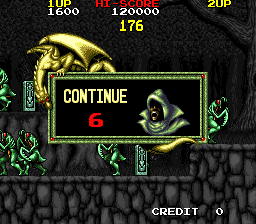 When you lose your last life, a low-quality sampled voice sounding like Jo Brand with a mouthful of wet bread asks, almost maudlin: ‘Don’t you want to play this game?’ then bellows with laughter, as if even he realises that the idea of squandering another second supping this abysmal tragedy juice is patently absurd.

Released in 1989, The Lord Of King is a blatant, albeit hamfisted, forgery of Taito’s 1987 corker Rastan Saga, a game I particularly like on account of its being a univocalism in ‘A’. 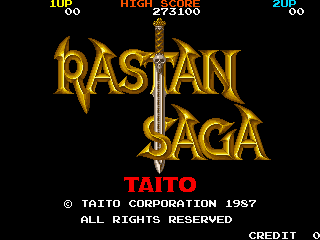 Rastan Saga is epic where The Lord Of King is anecdotal, visceral where the latter is coy, and fun where its rival is a flyblown mound of zebra shit. 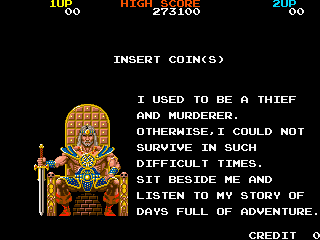 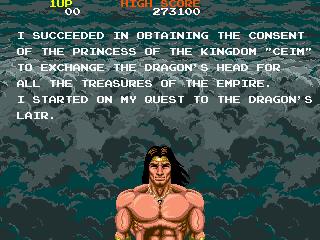 Taking you over rocky mountain ranges, through fetid swamps and into trap-filled castles, it’s a robust, well-realised Conanfest with just the right amount of hokey homoerotic thrills to keep your heart hammering in your chest – indeed, as your energy bar gets depleted, the discomfitingly realistic multi-chambered heart at the end begins to thud ever more rapidly, until you vaporise with an echoing moan. 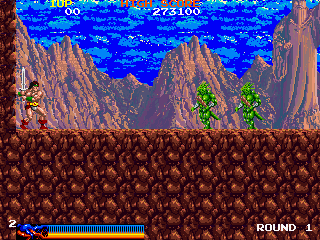 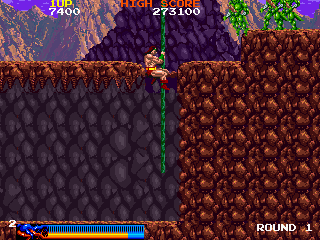 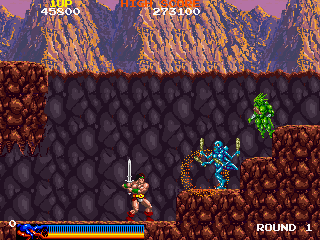 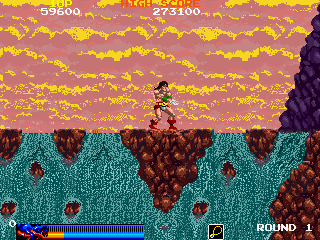 Rastan Saga‘s soundtrack is particularly mighty, with lots of cool percussion and pounding multivoiced sections to get the blood pumping. Why not dribble a little of its barbariany love into your ear-gobs? ‘Because I don’t like video games, Tim.’ What? Ah, fuck you! ‘He who is bored of video game soundtracks from the late eighties is bored of life.’ – Samuel Johnson< br />
[youtube=http://www.youtube.com/watch?v=0DdXI0oYZGQ]