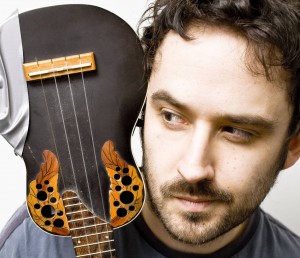 Tim Clare is a poet, author and musician. He was born in 1981, and grew up in Portishead, in South-West England.

In 2005 he presented the Channel 4 series How To Get A Book Deal. His first book, We Can’t All Be Astronauts, a memoir about jealousy and having one last shot at achieving your dreams, won Best Biography/Memoir at the East Anglian Book Awards. He has performed his work on BBC 1, 2, Radio 1, 2, 3, 4 and 6, and has written for The Guardian, The Times, The Independent, The Big Issue and Writing magazine, amongst others.

His fiction debut, The Honours, is published by Canongate. The Guardian called it ‘superb… gorgeously entertaining’, The Independent named it one of their 10 Best Summer Reads and said ‘Clare’s background in poetry sings from the pages of this dark fantasy… extraordinary… original, irresistible’, The Financial Times called it ‘a darkly compelling read’, the Sunday Express called it ‘riotously entertaining… delightfully twisted’ and The List named it ‘one of the most exciting pieces of fantasy fiction in recent years’. Grazia called The Honours ‘A rich and poetic novel from one of the UK’s most versatile writers’, The Herald said it is ‘A tour de force of breathless thrills… one which dares you to read it in one long sitting’ and Lovereading called it ‘beautifully written, vibrantly different and darkly rich… a stunning and beautifully moving debut’. Amazon made it their Debut of the Month.

As a stand-up poet, he performs all over the UK and internationally, both as a solo act and as a member of acclaimed poetry collective Aisle16 (‘Highlights of the spoken word scene’ – The Sunday Times). His debut solo show, Death Drive, appeared at the Edinburgh Fringe in 2010, where What’s On Stage gave it 5 stars and called it ‘the most compelling solo show on the Fringe this year’. His follow-up show, How To Be A Leader, appeared at the Edinburgh Fringe in 2011. It won a Brighton Fringe Best Show award, and the Independent called it ‘a wide-eyed, brilliant hour’. He has toured across the world, including Beijing, Shanghai, Melbourne, Sydney, Brunei, Copenhagen, Aarhus and Aalborg. His first collection, Pub Stuntman, is published by Nasty Little Press. His latest solo show, a new hour of his best stand-up poetry, is called Be Kind To Yourself.

Tim Clare is the creator of the Poetry Takeaway, the world’s first mobile poetry emporium. For the last 5 years, he has also undertaken his 101 Poems In A Day project, writing 101 poems in a day and posting each online as he writes it, based on title suggestions from the public.

‘without question, one of the most enjoyable hours I have ever spent’ ***** – ThreeWeeks

‘thoughtful, original and human… one of the best Fringe shows I’ve seen in ages’ ***** – Fringe Guru

‘sublime… has the audience hooting in recognition’ – The Guardian

‘astonishing, vivid… had me almost crying with laughter’ **** – The Scotsman

‘shrewd and funny’ – The Scotsman

‘Tim Clare is funny. He’s smart. His poetry and songs – he’s a dab hand at the ukulele as well as having a way with words – are fresh and entertaining, whether taking swipes at middle class mores or comparing his love life to that of a video game character. Clare clearly has bags of confidence, and an energy that not only propels his poetry along at a cracking pace but ensures the crowd is caught up in it too.’ – Spoonfed