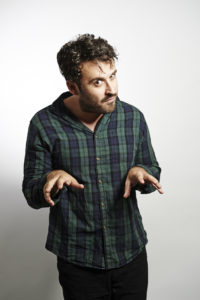 I’m the author of THE HONOURS, THE ICE HOUSE, and WE CAN’T ALL BE ASTRONAUTS (winner Best Biography/Memoir – 2009 East Anglian Book Awards).

I present the creative writing podcast DEATH OF 1000 CUTS for anyone who wants to know how to write a novel, write great fiction, and get published. My Couch to 80k Writing Boot Camp and 100 Day Writing Challenge are free writing courses by podcast.

I’m a stand-up poet with several award-winning 5 star shows under my belt.

Have a look at the main goings-on below, or click here to explore the rest of my website.

Care to Support Me?

‘Gorgeously gripping’ – The Guardian;
‘A tour de force of breathless thrills’ – The Herald

In The Honours, thirteen-year-old Delphine Venner explores the sprawling and mysterious Norfolk estate of Alderberen Hall. It’s 1935, and with war looming in Great Britain, Delphine must find the soldier within herself in time to battle a secret society and deadly forces amassing in the woods… A dark, glittering and dangerously unputdownable novel which invites you to enter a thrilling and fantastical world unlike any other.

WINNER OF BEST BIOGRAPHY/MEMOIR – 2009 EAST ANGLIAN BOOK AWARDS. I had always dreamed of greatness. Of writing a critically-acclaimed bestseller and quitting the rat-race of everyday life. The problem was that my friends had got there first and I was… well… nowhere. Seething with envy, single and still living with my parents, I decided to have one last shot at getting my masterpiece published. After all, things couldn’t get any worse. Could they?

My debut poetry collection mixes the surreal with the satirical. Pub Stuntman takes in celebrity zombies, dandified identity fraudsters and a gaggle of middle class girls (“so much richer than dustmen, yet poorer than earls”).

Work your creativity and get match fit to write your novel.

A free fiction writing course delivered by podcast. Build your writing muscles, train in different styles, and develop your confidence. There’s no homework, and you can complete the course at your own pace.

Making you an awesome writer, one cut at a time.

Death Of 1000 Cuts is a podcast for fiction writers, full of motivational rants, writing exercises, interviews with authors, and detailed critiques of first pages submitted by you, the listeners. Everything you need to write more and better, and love it.

Subscribe on Soundcloud, iTunes, or anywhere you get your podcasts.

LOADS MORE CONTENT!
Explore the rest of my site here