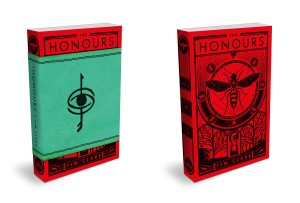 1935. Norfolk. War is looming in Great Britain and the sprawling country estate of Alderberen Hall is shadowed by suspicion and paranoia. Thirteen-year-old Delphine Venner is determined to uncover the secrets of the Hall’s elite society, which has taken in her gullible mother and unstable father. As she explores the house and discovers the secret network of hidden passages that thread through the estate, Delphine uncovers a world more dark and threatening than she ever imagined. With the help of head gamekeeper Mr Garforth, Delphine must learn the bloody lessons of war and find the soldier within herself in time to battle the deadly forces amassing in the woods… The Honours is a dark, glittering and dangerously unputdownable novel which invites you to enter a thrilling and fantastical world unlike any other.

‘A mysterious, haunting story that builds to a thrilling climax. Part Mervyn Peake, part Aliester Crowley, it features a truly original heroine in the form of Delphine, the shotgun toting schoolgirl. Tim Clare writes with a poet’s eye and a thriller writer’s pace that held me spellbound till the last page.’ (CHRIS RIDDELL)

‘Astutely brilliant. It is rare to find such a riveting, fantastical, adventure matched by such poetic flair. A rich, gripping delight.’ (MATT HAIG)

‘I love this novel and I love Delphine. She is irresistible. If I were facing hordes of merciless skinwings she is the thirteen-year-old dead-eye I would want on my side.’ (JOE DUNTHORNE)

‘A wonderful piece of storytelling, twisted in the best way. Delphine is a fantastic heroine.’ (ANNA FREEMAN author of THE FAIR FIGHT)

‘superb… gorgeously entertaining… There’s an early moment in poet Tim Clare’s debut novel when I sighed contentedly, assured of being in the hands of a storyteller who knows what his reader wants, and isn’t shy of giving plenty of it… The comparisons that most readily spring to mind are with the wildly eccentric and benevolent imaginations of Neil Gaiman and Terry Pratchett.’ (THE GUARDIAN)

‘A rich and poetic novel from one of the UK’s most versatile writers.’ (GRAZIA)

‘Tim Clare’s background in poetry sings from the pages… original, irresistible’ (THE INDEPENDENT)

‘A tour de force of breathless thrills . . . one which dares you to read it in one long sitting.’ (THE HERALD)

‘easily one of the best fantasy books I have ever read.’ (THE LITTLE CROCODILE)

Welcome, hello – brush the grass from your jeans,
I’ve just been explaining what ‘patronise’ means.
We say what you’re thinking – we do it in rhyme
sit down, shut up, cos it’s poetry time.

A poet, a comedian and a dab hand at the ukulele, Tim Clare is a one man variety show. His debut collection mixes the surreal with the satirical. Pub Stuntman takes in celebrity zombies, dandified identity fraudsters and a gaggle of middle class girls (“so much richer than dustmen, yet poorer than earls”). Both jaunty and dark, Clare is like his eponymous Pub Stuntman – an unabashed show-off who you can’t help but admire for his verve.

Tim Clare is the author of the prize-winning memoir We Can’t All Be Astronauts and two highly acclaimed solo stage shows, which he has toured worldwide. He is one of the UK’s most popular stand-up poets and a familiar face at both literary and music festivals.

“The bumbling charm of Jon Ronson and the splenetic bile of Charlie Brooker.”

WE CAN’T ALL BE ASTRONAUTS

‘Right!’ My dad slammed his fist against the dashboard. ‘If you want to die, let’s fucking die together!’

‘Dad… don’t,’ I said, referring to the profanity rather than the death-threat. But my father was lost in his own private Thelma And Louise moment. His sleep-deprived eyes were like ping-pong ball halves. His heel hit the accelerator…

Tim Clare had always dreamed of greatness. Of writing a critically-acclaimed bestseller and quitting the rat-race of everyday life. The problem was that his friends had all got there first and he was… well… nowhere. Seething with envy, single and still living with his parents, he decided to have one last shot at getting his masterpiece published. After all, things couldn’t get any worse. Could they?

From grovelling shamelessly to Jeffrey Archer on a reality TV show to a fraught encounter with The Most Powerful Woman in Publishing, a spectacular mental breakdown to an excrutiating suicide pact moment with his dad, Tim soon finds the answer is a resounding ‘yes’…