‘Tim is off on a search to rescue the Princess. She has been snatched by a horrible and evil monster.

This happened because Tim made a mistake.

Not just one. He made many mistakes during the time they spent together, all those years ago. Memories of their relationship have become muddled, replaced wholesale, but one remains clear: the Princess turning sharply away, her braid lashing him with contempt.’ 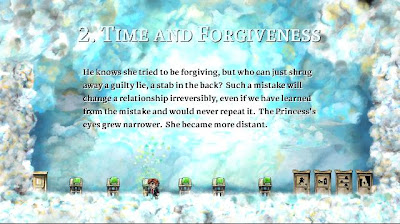 I’ve just completed Braid, the critically acclaimed time-shifting platformer. I’d heard lots of great things about it, including its being the highest-rated game on Xbox Live, but I never got round to playing it until I read on the news section of Ryan North’s awesome Dinosaur Comics that the artwork was done by David Hellman of truly incredible webcomic A Lesson Is Learned But The Damage Is Irreversible.

I know I’m using a whole messload of superlatives here, but it’s rare that this sort of confluence takes place. A Lesson Is Learned is one of my favourite webcomics ever. It’s been on semi-permanent hiatus since 2006, but the stuff up there inspired me, made me laugh, and reminded me what true storytelling is all about. There’s an incredible mix of styles and lots of engaging, surreal humour. Some of my favourites are Now We Are Poor Again!, Getting Over Women, Alcoholic Rabbit Tears It Up, and Traumatic Incident No. 17. Go on, go read them. I’ll wait.

Braid is a platformer where you can reverse time. As the game goes on, new elements are added and the puzzles get more complex. Glowing green things remain where they are when you reverse time. Glowing purple things leave a shadow version of themselves behind when you reverse time, a kind of ghostly echo that plays out when time begins moving forward again. Your aim is to collect the puzzle pieces scattered around each level, then reassemble the bits of the puzzle. 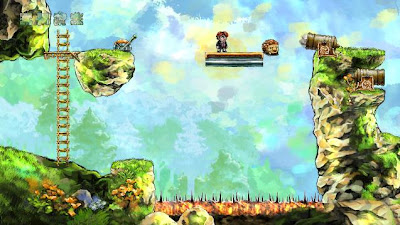 The graphics feel like an oil painting come to life, all flowing shapes and vibrant colours. There are lots of witty nods to games like Donkey Kong, Super Mario Bros, and Elevator Action, including the obligatory ‘your princess is in another castle’ brush off. But although the game mechanics are innovative and very cool, Braid is more about creating an immersive, moving narrative experience. Every twist in level design is reflected in the storytelling.

I must admit I was a bit taken aback when the game started, because the protagonist is called Tim. I don’t want to spoil the story for you, but Tim appears to have messed up a relationship that was really important to him, so he sets out to find the ‘Princess’ that he lost.

I know it sounds silly, but the game really affected me. Maybe it was partly to do with the character having my name, but Braid gripped me emotionally in a way no game ever has before. When I completed it, I felt utterly bereft. The story that unfolds is subtle, elegaic, and very sad.

I read an editorial in Edge last year that talked about how some indie games tend to get dubbed ‘art’ by virtue of their being unenjoyable as entertainment. I think there’s a lot of truth in that. Braid is a rare example of a game that manages to be both shrewdly crafted art, and good fun. It’s available as a download via Steam, for just £9.99. It was an impulse buy for me, and I’m super-glad I took the plunge. It’s short, but astoundingly executed.

‘Our world, with its rules of causality, has trained us to be miserly with forgiveness. By forgiving too readily, we can be badly hurt.’

We crave narratives. They can help make sense of the whirling havoc of our lives, give us goals, promise some golden reward later down the road. But there’s always a trade off. Stories are blinkers, and the bigger and brighter the prize, the harder it cleaves reality.

1 thought on “This Happened Because Tim Made A Mistake”