So, I started off on Thursday 2nd April in my current hometown of Cambridge, at Upbeat Open Mic at The Hopbine. 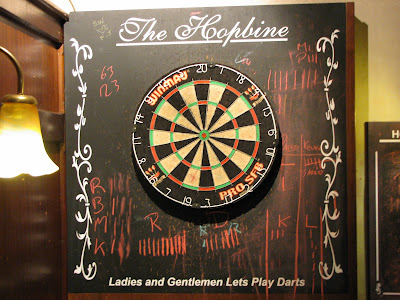 Up until a fortnight before, it had been held in The Zebra, but when the landlady decided she could draw more punters by putting on a more conventional night, the organiser, Alex Millar – AKA Alex Iamb – moved the entire thing across town. 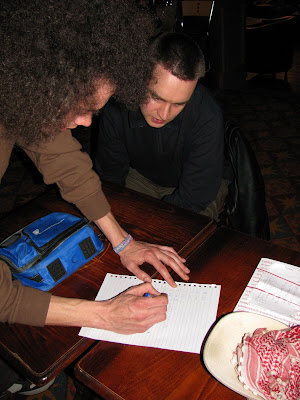 I wasn’t particularly nervous. It was a home gig, at a mixed discipline night that I expected would include a few shy poets reading off scraps of paper, some songsmiths busting out their latest ballad, and maybe an errant stand-up or two dying on their arses. The complexion of the night changed a little when The Katydids were added to the bill, a band from Germany fronted by an English singer who had lived in Germany most of her life and called the Deutsch-English pidgin she often spoke now as ‘Dinglish’. They were doing a tour of the UK, were in Cambridge anyway, and had asked if they could join in. 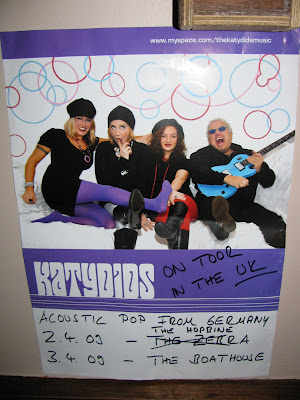 I asked the guitarist, who – to me at least – looked like a permed and bleached-haired Penn Juliette, if it was okay for me to take a few snaps of them setting up, and he sort of paused, then nodded, emphatically, and said: ‘Yes. Yes, it’s really okay.’ And smiled. At first I thought he was irritated, or that I’d been too wheedling, but then I sussed that he was using ‘really okay’ as a synonym for ‘absolutely fine’, which I suppose it is. Their music was poppy, 3-part harmony stuff – not exactly my kind of thing, truth be told. 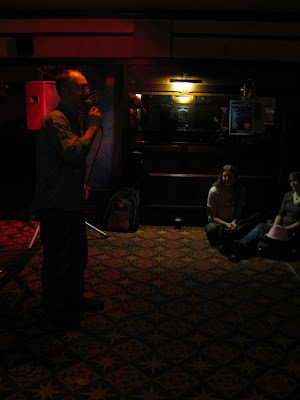 The picture above is of ‘Magic Phil’, a friend of Alex’s, Scouser, performance poet and erstwhile stand-up. Over a pint, Magic Phil had told me how he’d been doing three stand-up gigs a week at one point during the 90s. But he said he gave it up.

‘It’s too commercial,’ he said. ‘It’s been ruined.’ I told him about my Open Mic project and he seemed intrigued. ‘Are you going to do a book about it?’ he said. ‘Cos if you aren’t, I will.’

‘I don’t know,’ I said. ‘It depends if I find enough interesting people and things to write about.’

‘I did a bunch of gigs at one stage, a bit like you’re doing, y’know, booked up a bunch in a row and that, went on the road for a couple of months.’

‘Loneliest time of my fucking life.’

I felt my stomach drop into my shoes. ‘Oh Christ.’

‘I mean, the shows went fine, y’know, I’d go on stage and get laughs and that, and then come off and be on my own again. It was dreadful.’

I facepalmed. ‘Oh God. I can’t hack two months of that.’

And after I’d thought about what he’d said, I wondered if he mightn’t have a point. 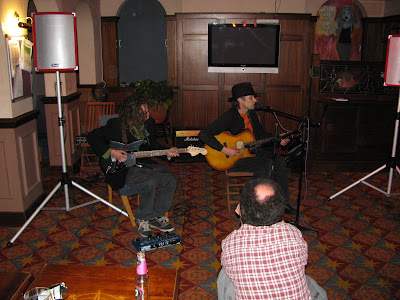 By the time I got on stage it was late, and the audience had transformed from a perhaps a dozen people, almost all prospective performers, to a heaving, rowdy throng. It wasn’t what I’d been expecting at all. A stand-up came on before me, trying out brand new material, which he had to keep checking, on a piece of A4 paper he put on the chair behind him. Some kid sitting right up the front answered his mobile 30 seconds into the stand-up’s set. When the stand-up started ribbing him, instead of climbing down gracefully, the kid kept talking, and stuck his finger in his other ear to continue listening to the conversation.

Meanwhile, The Hopbine gents’ toilets are past the ‘stage’, (which isn’t a stage at all, just a patch of carpet where the pool table had been, until had Alex wheeled it out of the way earlier) and with the size of the crowd people were starting to just cut straight across in front of him. Also, with a standing crowd, the audience could only see about 3 deep, and those at the back were starting to talk amongst themselves.

I really felt for the guy, although he handled his shit really well and worked pretty hard on trying to win round an audience who hadn’t paid and didn’t really want to listen to him. But it was kind of the nature of a night where anyone can watch, anyone can perform, and there’s lots of booze on offer. If something noisy and simple’s going on, the audience roar and can hold focus for a while, but as soon as it becomes dull or difficult or the pace slows, they revert to drinking and chatting amongst themselves, and, since there were so many of them, that made quite a noise.

I found my set surprisingly tough. I haven’t been doing my own gigs for a while, and I had to decide whether to attempt new material or go for old bankers. In the end, I tried a mix of both. My more involved, serious stuff struggled to grab anyone’s attention, and my performance flagged a bit. But as soon as I went into the loud, bawdy material, everyone whooped and bellowed and got behind it. It was a very heckly crowd, and I found myself wilfully fielding heckles and riffing off them. Unfortunately their was one gormless grinning bollock who was completely shitted and spent a lot of my performance shouting stuff that didn’t seem to even be in Engli
sh. He was the alpha bellend of the night, and ended up standing almost right next to me making loud whistles while I tried to sing, which threw me off my flow and made me forget lines. It was shitty and hardwork and by the time I finished the night I was pouring sweat and shaking with exhaustion.

I don’t want this project to be all about me doing tedious post-mortem exercises on the nights I’ve just done, and don’t worry, its final iterations won’t have too much of that, but I left The Hopbine baffled as to why anyone would put themselves on a stage, especially in a stand-up environment, where at any gig, one dickhead can ruin the night for everyone, including you, but you’ll usually be seen to be just as to blame, if you didn’t deal with it. Being an amazing performer doesn’t grant you advanced mind control powers. Surely the best peeps in the biz still regularly have worthless streaks of knobgrease balls up their sets just by being pissed and obnoxious?

I’d wanted to stick around for a while afterwards, chat to Alex and Magic Phil more, quiz some of the acts on who they were and why they were doing it tonight, and be more of a proper journalist about it all, but I was knackered, and I knew that the next morning I’d have to pack my things, and get on a train to do two stand-up open mics in a single night in Manchester… and I didn’t know when I’d see my own bed again.

Oh God. How the hell was I going to keep it up for two months? And what on earth was I hoping to learn? Already, I was worried that my open mic pilgrimage was going to batter the last grains of pixie dust out of me, and – worse – that I’d be so consumed by the pressure of my gigs, that I wouldn’t have the time or energy to meet anyone, or discover things that might be of interest to other people. What if it turned out to be a crap project?