I’ve been meaning to write a post on non-fiction books all SF (I’m using that to mean writers of Science Fiction, Fantasy, Speculative Fiction, New Weird, Bizarro, crossovery Literary-but-odd and all points in-between – please darling, let’s not get into a debate on taxonomy and nomenclature, not today) authors need to read. Obviously there are a whole bunch of specific books pertaining your particular areas of interest (waterwheels, clockwork automata, the anatomy of giant cephalopods) that you’ll need to hunt down – libraries and second-hand bookshops are ace for this – but I wanted to cover a suite of titles useful to everyone, no matter what your focus.

In fact, most of these titles will prove useful to writers of any genre. Death Of 1000 Cuts is definitely a broad church when it comes to genre and audience, but I’m aware that many submitters don’t confine their work to reality as we understand it, so I thought it would be nice to cater to their needs a bit. It’s no secret that I love a bit of SF, done right (although it so rarely is – x-ref Sturgeon’s Law). I also thought non-fiction would be a bit easier to cover definitively than fiction. I have a list of favourite novels but I’m not sure I could successfully argue their status as ‘essential’.

The books I’m about to share with you, on the other hand – you have to get them. They will save you time and pain. They will transport a whole lot of smart stuff directly into your brain and help you jump years ahead in your thinking and technique. They will make you a confident and sensitive lover. Okay, I lied about that last part. I learned all those skills from Mario Kart.

Some of these titles might be out of print. If only there were some kind of huge electronically-distributed global information network that could connect owners of unwanted secondhand books with eager buyers. Tsk!

1. THE LANGUAGE OF THE NIGHT: ESSAYS ON FANTASY AND SCIENCE FICTION 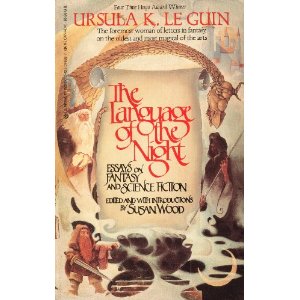 This is the best non-fiction book about the craft of writing I have ever read. I have read a lot. In a series of essays, Le Guin interrogates ideas of style and character with heart and panache and seemingly effortless humour. Throughout my first reading I found myself pounding the desk in agreement and writing down increasingly lengthy quotations until I realised I was basically transcribing the whole thing, like a medieval monk hunched over his illuminated manuscript.

My copy has gone to ground somewhere in the mysterious ecosystem of my office, but Le Guin’s essay ‘From Elfland to Poughkeepie’ is a particularly wonderful, barnstorming call-to-arms, at once a celebration of the essentialness and value of Fantasy, and a manifesto, showing how style is intrinsically linked to content, and how language choices are key to all good Fantasy.

Reading it made me feel like writing SF is not only acceptable, but important – courageous, even. It reignited a lot of enthusiasms damped down by a secret fear that SF isn’t proper literature. Le Guin makes the distinction quite clear – bad literature is always bad, no matter the genre. But quality SF has a power that realist literature can never attain – an ability to circumvent the conscious mind, to tap directly into our dreams and nightmares and half-formed fears, and to speak directly, wordlessly, to our cores.

Also she has some ace, practical suggestions on style. So yes – grandeur plus meat and potatoes. 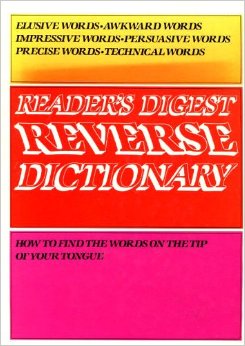 I first discovered the Reverse Dictionary on my grandfather’s shelf. It’s a wonderous contraption – look up a general word, like horse, and all at once you’re directed to a host of technical, specific terms, (‘gelding’ – a castrated male horse, ‘skewbald’ – marked with white, grey, brown or reddish spots, ‘lorimer’ – ironsmith who made spurs and bits for horses) including a diagram of a horse with the parts marked up: poll, forelock, withers, gambrel, etc. I asked my grandfather – who was surprised to see it and evidently hadn’t used it in years – if I could have it. He said no.

I eventually hunted down my own copy (a less attractive paperback edition). It is the single most useful reference book I have ever bought. It’s so much better than the internet for spot research. You can make yourself sound convincing about architecture, medicine, frogs, papal attire, the inner workings of a lock, etc, in just a few moments. It helps tighten up your language and expand your vocabulary. You learn pertinent stuff quickly. For poets, it supplies beautiful, specific terms quickly. Instead of having to walk to the library and hunt down a manual on ballet just so you can learn that a pirouette where the dancer throws a leg out while spinning is called a fouetté, you can just flick to ‘ballet’ and bammo.

Make sure you get a proper Reader’s Digest version – I’d recommend the hardback. They’re available through Ebay and secondhand book sites. It’ll change your life. 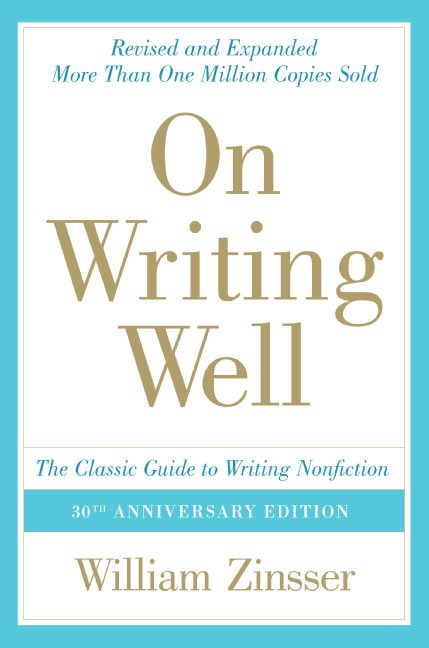 William Zinsser’s On Writing Well is a guide for non-fiction writers. It may seem odd to place it at #3 in a list of essential books for SF authors, but Zinsser’s discussion of self-editing and work on the line is peerless.

Seriously. Almost every book about creative writing is shit at explaining line edits. A lot of the authors aren’t very skilled themselves, by which I mean they’re fucking hacks. They gesture vaguely towards broad principles but don’t demonstrate them in action.

In his chapter on ‘Simplicity’, Zinsser includes an earlier draft of the chapter’s first few pages, including all his annotations and deletions. It’s a hugely instructive, practical, no-nonsense approach, and models an important trait of the successful self-editor: humility.

Though there are sections here and there that won’t be directly relevant to the SF author, you’ll learn more reading this than you will in 50 other hacky How 2 Rite manuals. I should know – I’ve read most of them. More immediately accessible than Strunk & White, this is a couple of nights’ reading that will reward you for the rest of your life.

4. THE TOUGH GUIDE TO FANTASY LAND 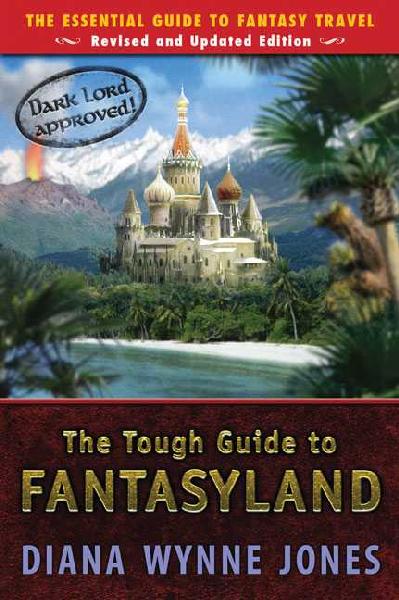 Diana Wynne Jones authored Howl’s Moving Castle alongside a slew of other children’s classics. The Tough Guide To Fantasyland is the spiritual grandmother to TV Tropes – an entertaining A-Z list of Fantasy clichés, absurdities and gross inconsistencies.

When I first bought a copy I was writing a Fantasy novel myself. I sat down, confident in the knowledge I was about to chortle at all the hackneyed foolishness of unoriginal Fantasy writers – and immediately discovered huge chunks of my imagined world laid bare.

Wynne Jones dissects lazy tropes of Fantasy with verve and palpable love. This is several cuts above your average lacklustre Lord Of The Rings parody essay – the depth that Wynne Jones goes into demonstrates her incredible knowledge of the genre. Like Le Guin, she is cruel to be kind. She adores Fantasy, and she is affectionately exposing its worst execesses and self-indulgences in a noble attempt to save it from itself.

As an author, reading this is like reading a beautiful, complicated, amusing instruction manual in what the genre has already done to death. You can still have dark lords and magic rings and hidden birthrights and leathery-winged avians if you must – but at least you won’t be kidding yourself, and maybe the nagging guilt will push you to try a little bit harder than just rehashing the same old guff.

Wynne Jones’ thoughts on Fantasy ecology and economies are particularly shrewd, and really blew my mind in terms of how lazy I’d been on the subject, and what an incredibly hard undertaking a worthwhile SF novel is. 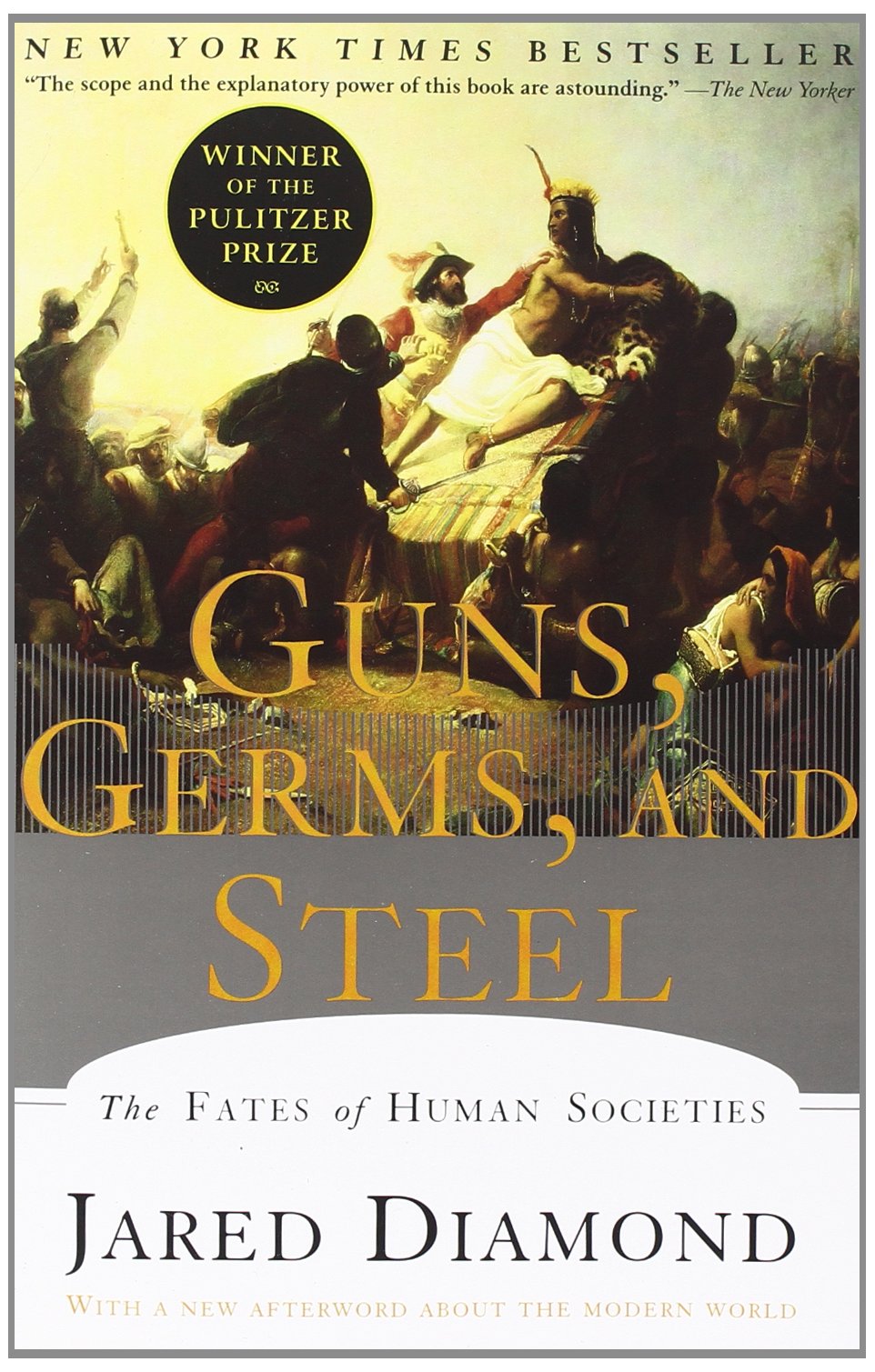 I know I’m not the first person to recommend this book to SF authors, but it is an ace starting point for thinking about world creation.

Guns, Germs And Steel is Jared Diamond’s accessible account of why, historically, some continents developed faster than others, and why some dominated others later on. There’s some great discussion of how technologies develop, how germ resistances develop, how agriculture allows all sorts of specialisation to take place, and why certain landmasses were more conducive to agriculture and domestication of animals in the first place.

If Wynne Jones’ book does a great job of skewering Fantasy tropes and showing them to be unsatisfactory, Diamond’s book is a fantastic route into thinking about how some of those world-building flaws might start to be addressed. It’s only a springboard – you’ll have to specialise your follow-up reading to suit the kind of societies you want to build – but it’s brilliant for problematising and focusing your thoughts on how nations rise and interact.

6. HOW TO WRITE SCIENCE FICTION & FANTASY 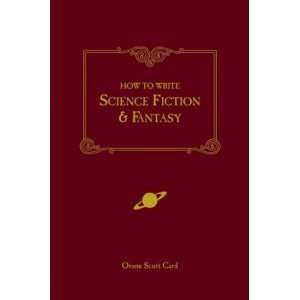 So I was reluctant to include this one, given that Orson Scott Card has been roundly condemned for expressing unpleasant, unkind and generally bigoted views, especially ones that come across as homophobic and racist.

The problem is, this book is fucking good. It’s the only decent creative writing manual focusing on genre fiction I’ve ever found. He explains some great imaginative exercises to create your SF worlds, and to work out who and what to focus on within them. His ideas on constructing magic systems or intergalatic space travel rules are incredibly shrewd, and his discussion of the difference between and Idea story and a Character story (indeed, his whole MICE Quotient model) is excellent.

So much of it speaks directly to a lot of the problems I see with writers’ first pages on Death Of 1000 Cuts. I found it so useful and interesting and it rewards repeat reads.

All I can suggest is that maybe you buy it online secondhand? Then he won’t get any money and you won’t feel icky. Or you can order it at your local library, which will up their circulation numbers while netting him about half a pence. Or maybe you could buy it but also buy Samuel R Delany’s About Writing as an act of cosmic balance. (I would have included About Writing in this list but I’ve only read extracts and so I can’t vouch for the whole thing, but Delany is a super-great eassayist and it’s probably worth a gamble)

Q. Why haven’t you included Stephen King’s On Writing in this list?

A. Because it’s shite.