It’s that time of week again. While I lie, sleepless, in my sickbed, clutching at the thick air and phasing in and out of languid fever dreams, you get to enjoy the erudite opining of Ross Sutherland. 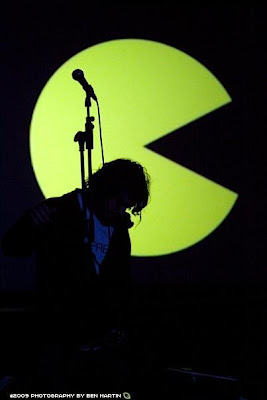 I’ve written poetry since I was five. My gran and I used to write together. She would use rhymes to help me remember shopping lists, stuff like that. When I moved to England, we kept in touch through poetry. That was the sole medium of our relationship.

When I was about thirteen, I inherited a copy of John Cooper Clarke’s collection, ‘Ten Years in an Open-Necked Shirt’. Two years later I went to see him at the Music Box in Edinburgh. Hearing those poems live was so dramatically different to the audiobook version I’d been running through in my head. Everything was transformed by his personality: his delivery, his accent, his banter with the crowd… it made that book seem so much more vital. It gave it a pulse.

The live poetry club quickly became the sounding board for everything new that I wrote. As my confidence onstage grew, so did the confidence of my writing voice. I was being constantly exposed to new ideas and techniques that I felt I could incorporate into my own work.

I know you can do these things without getting up on stage. But what’s special about poetry clubs is that they reach beyond poetic tradition. People gravitate into poetry for lots of different reasons: rappers sick of getting drowned out by their beatmen, comics who want a break from counting laughs, actors developing monologues, and so on. It’s inclusive for artists and audiences alike.

As a result of this mongrel upbringing, you can take these poets out of their clubs, put them into a theatre space, a short film, a comedy club, in-between bands at a music festival, and they adapt and thrive. Like cockroaches. Very entertaining cockroaches.

So there’s this impenetrable hermit-poet who typesets all his writing so it looks like he’s yanked it out of a printer jam. He submits anonymous articles to poetry journals, and openly asserts that any live performance of a poem (including performances of Shakespeare) is watering down its impact to a point where you might as well not call it poetry at all.

Then there’s this drama student who wasn’t breastfed as a kid, who has decided to write bad rhyming standup, despite the fact that the only poets they know are Wilfred Owen and Q-Tip.

These caricatures are definitely out there, but they’re the indulgent extremes of the fringe. The poetry scene likes to bring these guys up from time to time in order to sling mud at one another. In fact, I think most of us are somewhere in the middle of page and performance, trying to balance content and delivery equally.

A poet giving a straight reading from their book is still aware of the importance of giving the best possible oration. They’re still performing. At the same time, the poets who choose to incorporate comedic or dramatic techniques into their sets are still drawing heavily from the poetic tradition. Dividing poetry into page and performance seems unhelpful… it’s hard to imagine one existing without the other, and all the best poets are both.

So how would you describe your work?

Err. There’s not much useful lexicon in common circulation. It’s hard to identify concrete trends or scenes, or identify all the influences that go into a poet’s work, so we find it hard to describe what separates us from each other.

MAN 1: Would you like to come with me to watch the poet Ross Sutherland?
MAN 2: Dunno, what’s he like?
MAN 1: He’s a Comic Romantic. Roots in Projective Brutalism, filtered through Puzzler Magazine. Occasionally you wonder if he might be a parody of a poet and the joke is on us. Sounds like Shel Silverstein with a cold. Interested?
MAN 2: No.

Because they’ve watched some stuff online and they like the sound of it. Best way to do that is to check out the websites of the big poetry clubs. Nights such as Book Slam, OneTaste and Homework in London. Hammer and Tongue in Brighton, Big Word in Edinburgh. Surf around and see if anyone takes your fancy. For starters, I recommend David Jay, Excentral Tempest, Niall O’Sullivan, Nathan Filer, Byron Vincent, Francesca Beard, Polar Bear and my own collective Aisle16.

Whatever you do, don’t just pop along to your local poetry open mic. The grassroots scene can be amazing, but it can also feel like gatecrashing a therapy session. Do your research before you commit.

Whatever I’ve written most recently. My repertoire is basically a conveyor belt. Favourites drop onto the front, get tired and increasingly hackneyed, then eventually drop off the back into embarrassment and regret.

There’s be no point. I’d steal it, rinse it out every night on stage for six months, then start hating it and drop it from my set. People would be all like, “Ross, why don’t you do Prufrock anymore?” and I’d be like, “ah, that’s so cheesy.”

Tom Cruise’s poem in Cocktail. It covers every major don’t in poetry in less than sixty seconds:

Also – people who use the stage as a soapbox for liberal causes that no one in the room could ever possibly disagree with. Racism is bad. Clubbing seals is bad. Totalitarian regimes are bad. Just once, I’d love a Nazi to stand up in the middle of one of those poems and shout “Nnnnoooo!”

I once compared a wrestling match in St Helens, reading poems in-between bouts. It was amazing. The wrestlers were very pleasant to me backstage. About halfway through the event, I read out a love poem called “Let’s Wrestle”. One of the heels, a wrestler called Heresy, jumped into the ring with me. He tore the hat off my head and bellowed, “I told you, I hate that hat!” Then he stuffed the
poem into my mouth, beat me up and threw me out the ring. At that point, one of the goodie wrestlers had to run in and save me. We didn’t get to practice beforehand, so I’m not sure how realistic it looked. The kids went apeshit for it though.

Afterwards, Heresy congratulated me on my performance. “I’d glad you kept the poem in your mouth,” he said. “Usually, when I defeat a wrestler, I tear a page out of the bible and make them eat it, but they always spit it out straight away.” That’s what the poetry scene has taught me: stagecraft. Stagecraft and humility.