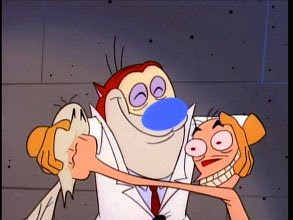 There’s an episode of Ren & Stimpy where Stimpy creates a formula that physically splits psychotic chihuahua Ren into the two sides of his personality – ‘Evil Ren’ and ‘Indifferent Ren’.

As my open gigs aggregate like silt, I’m finding I’m not growing more confident, just more indifferent. At my last stand-up gig in Shepherd’s Bush, I did no preparation, got on stage and was rubbish, bombed, and I didn’t care. This doesn’t feel like progress to me.

It’s not like I’m feeling apathetic about the world in general – I’m still enjoying watching new acts, meeting people, getting to know them, etc. In fact, in some ways, I’ve learned to unironically enjoy acts who maybe aren’t ‘good’ in the conventional sense. Being nosy and talking to folks has shown me just how interesting and likeable some folks can turn out to be.

But I’m not exactly feeling passionate about my own work. I seem to be getting worse, not better, and with each diminishing return my interest in mounting a fightback decreases. If heading out to such a concentrated succession of open mics was intended to accelerate me through a portion of my career I missed, I fear I’ve overshot, speeding past naive pluck, ambition, and mastery, straight into ‘jaded hack’ territory.

Was it always like this? Were my nerves the only thing distracting me from how rubbish the gigs were?

1 thought on “Ren’s Bitter Half”