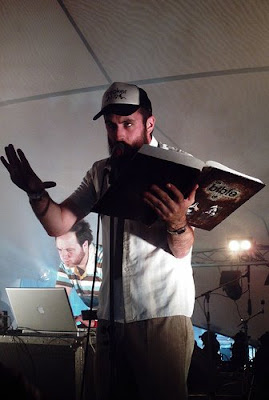 How did you get into performance poetry?
It was a strange one really. I had been in various bands and tried to work with various musicians but musicians (and my friends) by their very nature are incredibly unreliable! I realised that, with spoken word, the only person i had to rely on was myself. If it all went tits up, only I would be to blame. Then at the same time, if it all went great, I could bask in my own glory!

How would you describe your work?
I generally just describe it as spoken word. Due to the fact it is a collection of words that i speak. I like to tackle some quite dark subjects, often within a more lighthearted surrounding to give it more impact. I did a gig for onetaste once and, both in his introduction and after the set, Jamie Woon just kept saying ‘Light and Dark, Light and Dark.’ I think that’s a pretty accurate description of one of my sets.

Do you think there’s a difference between ‘page’ and ‘performance’ poetry? If so, what?
I really do. That difference is the performer. I remember reading some Niall Spooner Harvey on recmendation and, whilst I enjoyed it, I didn’t really think it was my kind of thing. Then, about a month later, i saw him live and his performance and delivery just made it all make sense. I think, particularly as a performer, when you read someone else’s poetry you impose your own performance style and technique upon. If it doesnt match how you write/perform then you may not fully appreciate it.

Why should someone come to a performance poetry gig?
Variation!! I think the ‘scene’ at the moment is just so varied in style. People often think it will be hours of people churning out long boring pieces but it really isn’t! If you get down to a good poetry night then it can surprise you with every new poem.

What do you think your best poem is, and why?
This is a really hard question! There is a poem I do called ‘Unspoken Word Poetry’ and, whilst it may not be my best piece, it has certainly been my favourite to perform for sometime now. This is due to the fact that is has a section of beat boxing in it that is essential to the piece so it can never be a piece of written poetry and therefore only ever exists in the moment that I am onstage performing it.

If you could nick one other person’s poem and claim it as your own, which poem would it be, and why?
It would be Cooper Chimbonda by Musa Okwonga (that rhymes…). The first time I saw this performed live I was stunned. I was up against Musa (and maybe yourself from memory) in a Shortfuse poetry slam and as soon as I heard that piece I knew there was only one winner. It’s a 10 minute poem that keeps your interest throughout. Beautifully written, with wit intespersed within masses of emotion and conflict.

What typifies bad performance poetry to you?
Harsh question! But I will happily answer! When I started off on the scene I went to four or five open mics and slams a week so I got a good, quick, concentrated view of the scene so it was easy to flag up what I didn’t like. I found that, at many poetry shows, there would be a lot of people feeling that if they mimic Ginsberg’s slow…..draaaaaaaging…..wiiiiiiiiinding delivery style then it will make anything sound good. The fact is it actually makes most things sound bad. Unless you are actually Ginsberg. Which none of them were…

What do you think of the state of the UK performance poetry scene at the moment? Is it okay to talk about a ‘scene’, or is that a bit unhelpful?
Well look at that! We both, kind of awkwardly, put ‘scene’ in little quotation marks. I think there is a scene and it’s fine to talk about it that way, largely because of all the different styles and approaches with in the scene. I do a weekly poetry slot on BBC Radio One and I get different poets in each week. It frequently amazes me to see the depth and quality that is out there. Obviously there will be some slot where I think that I am maybe making up the numbers. Only every now and then! But EVERYTIME I have thought that, the poet has come in and been one of my favourites on the show.

Tell us about a particularly memorable reaction you’ve had to your work.
Well, I have afew pieces about suicide and self harm so I regularly get some teary emotional reactions which is always a weird mixture of being a huge compliment and hugely uncomfortable at the same time!

Since you’re quite the inter-disciplinarian, what you think the worlds of music and poetry have got to teach each other?
I think the two don’t necessarily have anything to teach each other. They just present each other with further options and areas in which to explore. Poetry doesn’t need music added. Music doesn’t need poetry added. But if you can develop the two together then the directions are almost limitless!