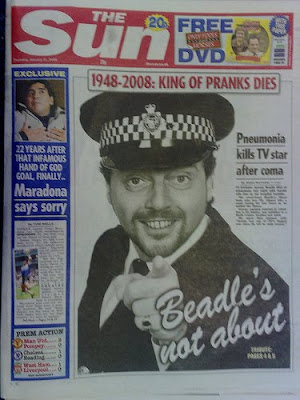 When I heard Jezza Beadle had snuffed it I were rate sad.

Not in that whole, ‘Hay let’s get stoned then watch Volume 3 of Steven Segal’s Body & Spirit Motivational Workout on VHS’ internet-age hyper-irony way – I genuinely remembered him as seeming like a nice guy who was made the target of a lot of (only half-serious, but still) public bile and horrible remarks about his physical appearance. As with Heather Mills’ losing part of her left leg, it seemed that the country had convened a meeting and decided that Jeremy Beadle’s Poland’s Syndrome was not a bona fide disability, but a comic misfortune ripe for mockery and scorn. I feel pretty strongly on this – if you think Heather Mills is a gold-digging batshitinsane scarecrow lady worthy of a wet slap round the chops then by all means say so, but stop fucking bringing her injury into it as if it represents some character defect, you ignorant, prejudiced cunts. It’s just cheap sniggers at the divvy kid in class in another guise, and all sections of the media are guilty of it.

I’m a bit shy of admitting it, but I think Jeremy Beadle was a big inspiration to me. In lots of ways, he was ahead of his time. You’ve Been Framed and his primetime show featuring viewer-created sketches, Beadle’s Hotshots, prefigured the monster success that user-generated content would have with the advent of Youtube. I videotaped every single episode of Beadle’s Hotshots, and I would watch them and rewatch them. Granted, it was essentially a less esoteric, naughty and cool version of Adam Buxton’s Takeover TV, but it was amateurs, with cameras, making really stupid short sketches, and when I watched, I thought, I could do that.

I couldn’t, as it happened. Even the appalling ‘punchlines’, palsied camerawork and leaden performances drastically outshone anything I’d ever produced on the family camcorder, mainly because they kept things simple. But – in my favourite clips at least – the people involved were clearly having a great time pissing around and being silly, and I loved that. A lot of coolness, for me, has always been about not appearing too bothered about what other people think – not in a drink medicine, shit your pants and bellow racist epithets at pigeons way, just in a ‘I don’t mind if you think I’m silly’ way. Anyway, that show meant a lot to me growing up, and it was fronted by the Beadmeister.

Watching a recent ‘the greatest TV pranks of all time’ clip show, where the pranks in question were chosen and presented by Jeremy Beadle, I was impressed to see that, as number one, he’d chosen Brass Eye, noting that, although it’d caused a lot of controversy, he thought it was peerlessly hilarious. I was surprised at his choice, but it made me respect him, and believe that, despite the fact that the closest he got to gags during his You’ve Been Framed links was alliteration (Harry Hill is effortlessly superior), he’d got a good sense of humour.

Add to this the fact that, over his lifetime, Beadle raised a reported £100 million plus for charity, and you can’t help but wonder just what it was that inspired such hatred, to the extent that the British public voted him their second most loathed person, after Saddam Hussein.

Then you watch a couple of clips from Beadle’s About, and oooooh. The penny drops.

The most common modus operandi of Beadle’s About was basically: pretend to rob working class person of their livelihood. Laugh at their despair. Reveal the con, and GIVE THEM NOTHING.

Watch Beadle’s face after about 0:50: ‘Dave Hughes is a market trader. He parked his van, full of his entire business stock, on the quayside at the Docklands Sailing Centre.’ Listen to him trying to disguise his mirthful contempt as he says the words ‘entire business stock’. Then remember that, at the time of recording, he was a millionaire.

What are we laughing at, exactly? Dave Hughes’ howls of genuine anguish as he sees his ability to make a living destroyed in a single stroke? The ridiculous good grace and calmness with which he tries to deal with it? What kills me is how pathetically grateful he is after the ‘reveal’. Brilliant. Everything I’ve worked so hard for hasn’t been snatched away by blasé arseholes with more money than me. Maybe Thatcher’s Britain does work.

Jeremy Beadle, you brought me a lot of happiness. But you really were a tactless wanker.