He came to power with an agenda of change, and in doing so, brought hope to a hitherto disenfranchised section of the populace. Ladies and gentlemen, I give you America’s first purple president: 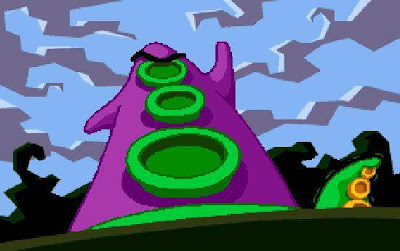 All great villains evoke guilty admiration. Though your official allegiance is with the heroes, you can’t help looking upon the motley havoc wrought and thinking: Y’know, if I were a maniacal purple tentacle bent on conquering the planet, I’d want to be that one.

I stumbled across Day of the Tentacle rather than legitimately discovering it. We got our first PC from a furtive, mulleted guy who worked from a converted loft and chain-smoked roll-ups. Whenever we got it back from a repair or upgrade, the fan would spend the first ten minutes belching stale fag smoke. He had a computer in the back room, linked to what was probably a 12kbit dial-up modem, perpetually flashing and whirring as it downloaded pirate software. When we bought our PC, he chucked in a CD chock full o’ stolen RPGs and point n’ clicks.

As it turned out, most of the files were corrupt, and didn’t work. But one of them ran for approximately ninety seconds before crashing – just long enough for me to get my first glimpse of one of the coolest video games ever made.

Day of the Tentacle is a point-n-click adventure. For the filthy uninitiated (*ptooie! ptooie!*) a point-n-click sees you controlling a character (or characters) with your mouse, clicking on where you want to go, then clicking on objects to examine them, or pick them up, or use them. It plays like an interactive cartoon, and generally requires you to solve various puzzles in order to advance the story. In Day of the Tentacle, you control three teenagers:

a layabout roadie, and Laverne,

a creepy aspiring vivisectionist, pictured here wearing a tentacle disguise made from an altered United States flag. (and… am I smoking a colossal bowl o’ crack, or does she look a little like her namesake, Lauren Laverne, Kenickie-era?)

They’re amusing enough comic stereotypes, but the real love goes to their nemesis, Purple Tentacle, who becomes obsessed with world domination after drinking toxic waste. I mean, you can’t help but doff your hat to the ingeniousness of his takeover plan.

After a spate of cow-tipping (apparently to work off steam and test out his new arms), Purple Tentacle steals the priceless FrooFroo Emerald, then returns it, pretending to have rescued it from the thief. Feted as a hero, he is eventually awarded Man of the Year and is invited to visit the Whitehouse. Before long, Purple Tentacle has milked his newfound popularity and lofty contacts to become Vice-President of the United States. Then, when the President falls ‘mysteriously’ ill, Purple Tentacle becomes President, at which point he starts passing draconian laws that grant tentacles new rights and demote humans to mere pets.

It’s wonderful, hokey, moustache-twirling stuff, made all the more engaging when a bungled time-travel attempt scatters the three protagonists across time, leaving Hoagie 200 years in the past, Bernard in the present, and Laverne 200 years in the future. Thus we get to see Purple Tentacle’s futuristic dystopia, where humans’ tentacle owners make them participate in degrading beauty pageants –

a world in which Purple Tentacle is still alive, albeit very elderly, and still unsatisfied with the level of human subjugation. Disgusted with the ‘humanophiles’ who would choose to keep people as pets, he is working on a shrink ray, ‘the Diminuator’, to finally shrink all humans out of existence.

There’s a nice cut-scene gag back in the past, where George Washington, Thomas Jefferson and John Hancock are working on the constitution. Washington is portrayed as an aloof braggart, with Jefferson almost as cocky. When Hancock timidly suggests: ‘Should we put in an amendment saying the president has to be human?’ Jefferson and Washington shout him down.

Purple Tentacle first appeared as a dimwitted flunky in Maniac Mansion, but it’s not until his mutation into evil genius that he really gets to shine. Even as a villain, Purple Tentacle is exceptional, because he achieves his brutal goal – only to have our trio of meddling kids undo it, of course, via the power of chronophysics.

One of the most appealing things about many great villains is their breadth of vision. Heroes pick apart and undermine, toiling to restore the status quo. They rarely dare to dream so grandly.