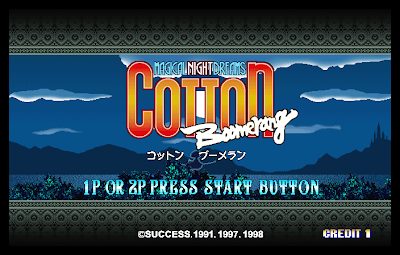 Cotton Boomerang (full title Cotton Boomerang: Magical Night Realms) is a side-scrolling shooter that takes the hypercolour cutesy aesthetics of games like Pop n’ Twinbee and Parodius, dials back on the self-consciously wacky elements, adds a touch of R-Type, then finishes with smatterings of that deliciously cultish shoot-em-up sub-genre, ‘bullet hell’, to create a game that’s big, brazen, and really rather good.

I realise that most readers of my blog will be going WHAT THE CRAP TIM at this point, because I’m talking entirely in video game references and most of you are artsy types whose shoot-em-up knowledge starts and ends with the ironic Space Invaders t-shirt you sometimes wear at festivals, so look, even though you feel horribly alienated and you’ve probably already stopped reading by this stage, just for you here’s a (very) brief bluffer’s guide to shoot ’em ups. Who knows, one day (in a somewhat bizarre set of circumstances) it might just save your life. 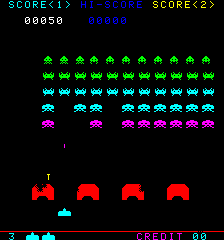 So it starts with Space Invaders in 1978, your little ship tucked behind destroyable bunkers, shooting up at gradually descending aliens. 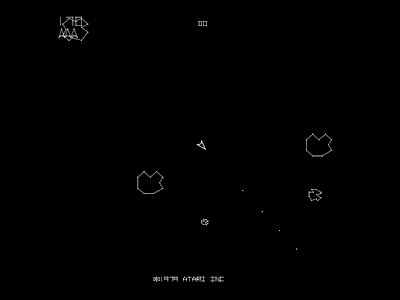 1979 saw vector-graphics based Asteroids, where your little triangular ship can rotate through 360 degrees and fly around the screen with the thrust button. Your job is shoot at the asteroids, breaking them into ever smaller chunks until they disappear, without colliding with them. Pew pew pew! Later shoot ’em ups in the ‘fly in any direction’ sub-genre include Sinistar, Time Pilot, Blasteroids and Geometry Wars. 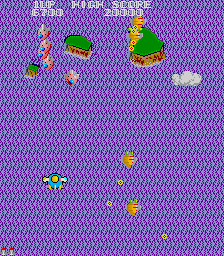 Vertically-scrolling shooters like Twinbee built on the single-screen format of Space Invaders and saw you taking the battle to your enemies. 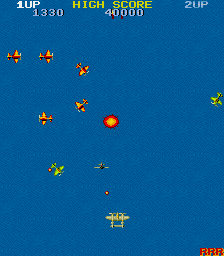 1942 is another classic vertical-scroller, replete with power-ups and ridiculously huge planes which you must nail with a hail of gunfire. 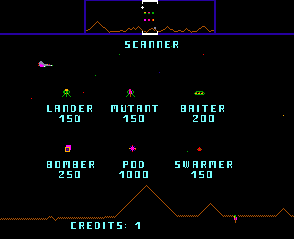 The granddaddy of the side-scrolling shoot ’em up is Williams’ Defender, a peach of a title where you nim about in your little spaceship trying to stop aliens snatching humans off the planet and using them to transform into super-fast mutants. The game is impressively elaborate, with a range of enemies, a ‘scanner’ display up the top of the screen that shows you where your enemies are, smart bombs, and a ‘warp’ button that gives you a last-resort escape hatch when under fire. Games like Scramble foreshadowed the more straightfoward left-to-right shooter, the main difference being that Scramble is absolute unremitting shite. 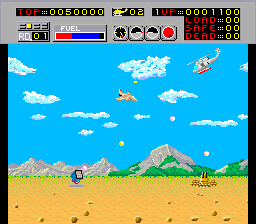 Sega’s Choplifter is one of the more successful attempts to create an earthbound variant, pitting you against a plethora of anti-aircraft turrets and fighter jets as you attempt to bust hostages out of their holding cells and fly them back across enemy lines to safety. 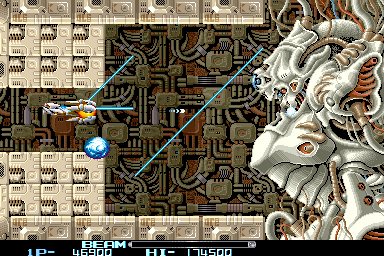 The R-Type series is one of the most fondly-remembered instances of the side-scrolling shooter, boasting many features that have now become staples of the genre. By holding down the fire button, you can charge your laser, allowing the player to choose between rapid fire or big, surging blue blasts of energy. Multi-directional lasers that can ricochet off walls and air-to-ground missiles add to the havoc, as do the gigantic fearsome bosses that wait at the end of each stage. 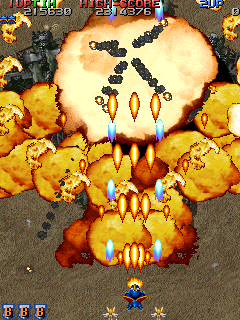 In lots of ways, the shoot ’em up in most of its classic formats is something of a forgotten relic, but one of the most modern iterations is the ‘bullet hell’ sub-genre. It took a while for hardware to reach the stage where it could cope with calculating and updating the exact position and velocity of pillions of different-sized projectiles, but once it could, a hardcore of shoot ’em up junkies found themselves drawn to games where colossal, multi-part bosses spew volley upon volley of burning death, leaving you tiny wedges of screen to hide in while you fire back with everything you’ve got. The game above is Raiden Fighters Jet, a late iteration of the popular Raiden series. Bullet hell isn’t for e
veryone. It’s kind of like grindcore – it’s evolved to scratch a very particular itch, to the extent that the genre and its select audience exist in an almost symbiotic relationship. You have to be committed to take on bullet hell. This is the real shit, yeah?

So yeah, Cotton Boomerang. Remember that? When you start out, you get to select a team of three characters from a choice of eight possible shot-patterns. Once you’re in-game, you can switch a limited number of times (you can replenish your ‘switches’ with power-ups) and, if you get hit, that character drops out and the next in line takes over. 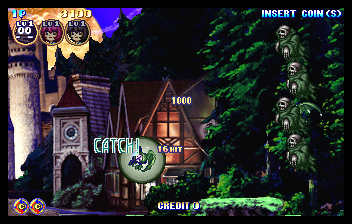 Cotton Boomerang synthesises the cutesy monkey business of Twinbee with the robust power-up spread of R-Type and Raiden’s merciless spray of deadly ordnance. As either a witch on a broomstick, a fairy, and some kind of sentient witch’s hat presumably employed as comic relief, you battle legions of magical fiends and nasty beasts. As with R-Type, you can charge your shots – a full-power blast unleashes some kind of etheric dragon which blasts through foes and traps them in spheres, Bubble Bobble style. You can then catch these spheres, and fling them across the screen into other bad guys, who will in turn be captured, and so on and so forth. Like the ‘option’ unit in R-Type, these spheres absorb most bullets, cutting a useful swathe through enemy fire and offering you some much-needed breathing space. 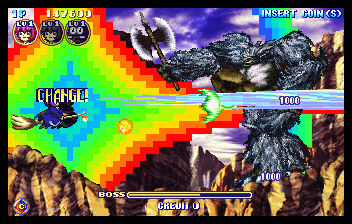 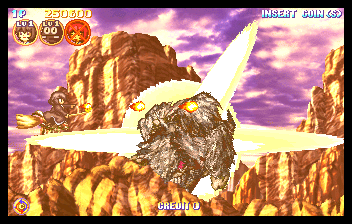 Like most bullet hell shooters, Cotton Boomerang is all about the boss battles, which are everything you’d expect them to be – creative, spectacular, and brutally unforgiving. At first, you’ll just get nailed repeatedly as the boss ejects seemingly unavoidable walls of projectiles. If you persist, however, you soon discover ways to take cover or blast through, and resulting in some near-knuckle evasive maneuvers and a lovely jolt of adrenaline. 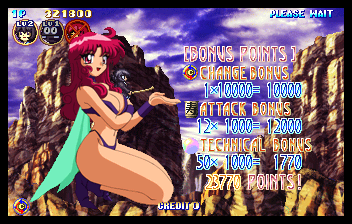 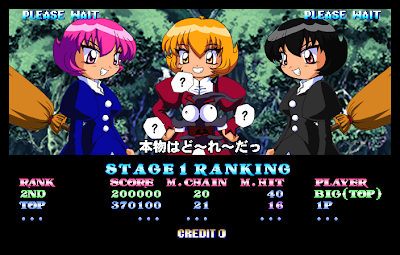 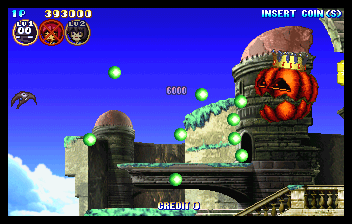 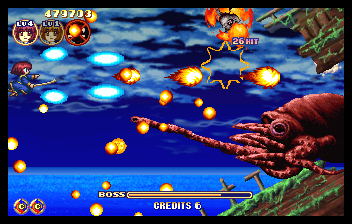 So yeah, in summary, Cotton Boomerang is a game with a silly, effete name that carries a technicoloured sledgehammer. Come and have a go if you think you’re hard enough.