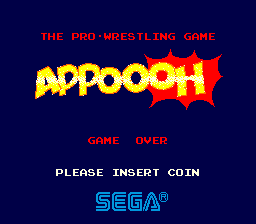 Appoooh is an early attempt by Sega to capture the excitment and sweaty, balletic majesty of pro-wrestling, without actually forking out for the rights to the WWF franchise. This 1984 button mashathon sees you limp and jerk around the ring, punching, kicking and grappling your opponent into a stupor before going for that all-important pin. 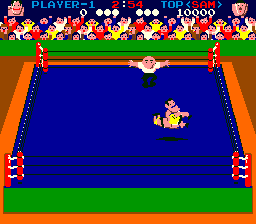 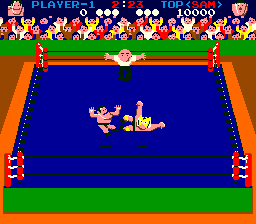 The ‘action’, such as it is, can even go outside the ring: When you start out, you’re offered a selection of wrestlers including the rather cheekily named ‘H. Hogen’ and the similarly copyright-skirting ‘A. Giants’. With moves such as the ‘Body Slum’ and ‘Neck Hanging’ at his disposal, this Mr Giants fellow sounded like my kind of beefcake, so he was the lucky brawler I chose to take me into my first bout. 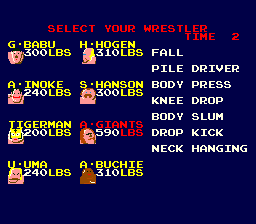 Now I know here that A. Giants [left] looks, if anything, like Rowlf the Dog from the Muppets, which might lead you to question his chances of success, until you notice that his first opponent is David Crosby. 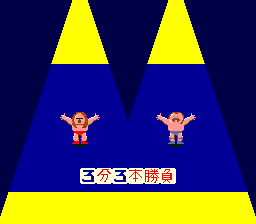 Sure, side by side two of America’s best-loved musicians look pretty evenly matched. But once you step into the ring… 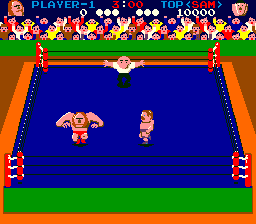 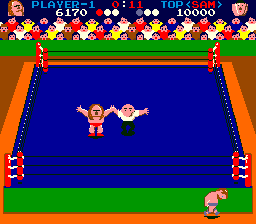 The combined power of freakish monkey arms and the devastating body slum made short work of Crosby, who sloped off to seek solace with the other members of his increasingly uncool supergroup. Like a lot of beat em up games of this era, you can only attack people to your immediate left or right, meaning skilled fighters stand slightly above their opponent, before moving down at the last moment to attack. You’ve got two attack buttons at your disposal, punch and kick. Pressing forward and kick together makes your wrestler do a dropkick. By pressing forward and punch, you lock your foe in a grapple. Then it’s just a case of bashing the buttons fast enough to win, so you can hurl them into the ropes or pile driver them.

Having won my first bout at a canter, I was getting a bit cocky. I have huge bemuscled arms and the face of a dog, I thought, who on this planet can challenge me? 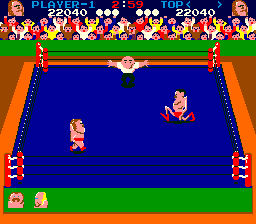 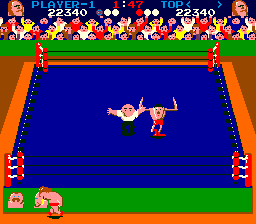 Sigh. A wrestler with not just long arms, but super-long legs. Yes, this spaghetti-limbed gangle-molester made short work of poor stubby-legged A. Giants. I staged a brief, promising comeback, keeping him at bay with well-timed dropkicks, but once he had me in a grapple it was curtains. Headlocks, elbow drops, all sorts of monkey business. I left, humiliated, my head swirling with the image of a tortoise on its back, helplessly pedalling its useless limbs while an ostrich pecks at its exposed belly.

Oh. The game’s rubbish, by the way. I have no idea why it’s called ‘Appoooh’, except that, possibly, it is one. Aha. Ahahahahaha!