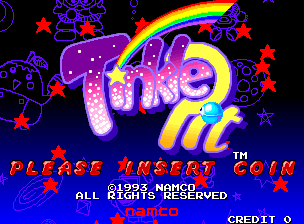 Tinkle Pit is the kind of hyper-cutesy epic bananas-ness that peaked in video gaming around the late 80s and early 90s. For the most part Taito had this market all sewn up, with the Bubble Bobble franchise, New Zealand Story, Don Doko Don, Rodland and Liquid Kids amongst others. Namco clearly decided they could go one better. 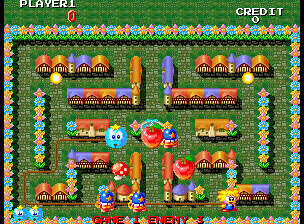 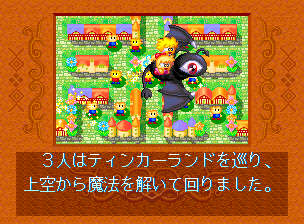 Tinkle Pit is laden with aggressively pointless, incomprehensible shit swirling round reefs of heavy-handed Namco cameos. Cribbing heavily from Universal’s Mr Do series (especially Do! Run Run), the game sees you lugging a giant sentient jingly bell around a maze full of enemies. Holding down a button pays out the rope the bell is attached to. As you walk around, this trail of rope grows longer and longer, until you release the button and – ping! – the bell goes shooting along the trail you’ve left until it returns to your side. Any enemies it hits along the way get killed. 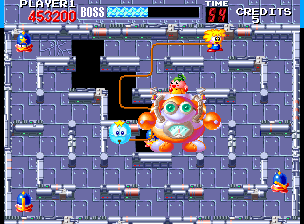 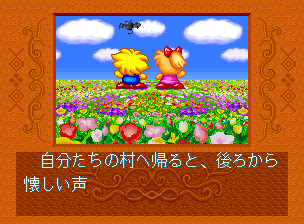 The sub-genre of ‘games with elaborate and idiotic ways to kill enemies’ is replete with this kind of asinine Heath Robinson muppetry. Dig Dug started it all off, making you inflate foes with a bike pump (the Fygars and Pookas from Dig Dug appear in Tinkle Pit too, as if Namco are desperate to batter us over the head with reminders that they make good games too), then there was Snow Bros, where you had to bury enemies in snow until they became a huge snowball, before kicking it into the other baddies. Tumble Pop made you suck multiple bad guys into a vacuum cleaner before firing them back out as a big, tumbling ball of limbs. 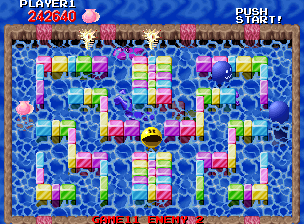 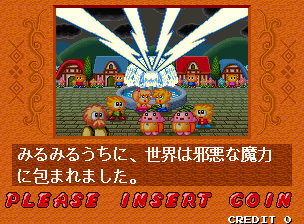 Tinkle Pit is crappy. It starts off ludicrously, insultingly easy, so that on a first go it’s possible to get past the first two worlds without losing a life. Somewhere around the middle, the difficulty jumps from ‘simple’ to ‘frustrating’. Levels suddenly become packed with baddies, and robots are introduced that fire deadly lasers that can pass through walls and travel the length of the screen. Even less forgivable, there are only two boss battles in the entire game – the majority of it is taken up schlepping round saccharine giga-nippon labyrinths, waiting for foes to blunder into the path of your massive, jangling bell. Ha. 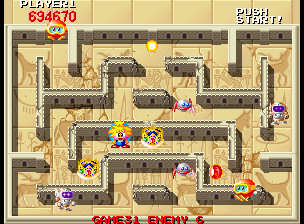 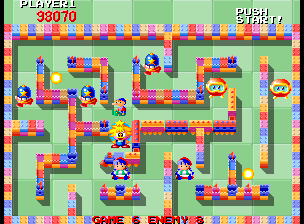