On Friday in Dublin, I was all geed up to go to another stand-up open mic, slur an adequate routine then do the rounds of the night, harvesting real human beings who I could twist and compress into grotesque caricatures before installing them in a barbarous freak gallery known only as ‘The Project’. I checked my destination on a map, noted down directions, then all buoyant and purposeful, set off.

I strolled down the hill from my hotel, my ukulele on back, past lavish Georgian terraces decorated with historical plaques,

following the road until I crossed into what passes for Dublin’s very small Chinatown district,

then on, down a narrowing pub-lined cobbled street hemorrhaging dark alleys, until I came to the bar I was after, wedged on a corner, its entrances obstructed by short, squinting men who took fractious tugs on their roll-ups. I said ‘excuse me’ in a meek, barely audible murmur, and went in.

Inside, there was no sign of a comedy night. People sat in tight clusters drinking and chatting. Multi-coloured fairy lights hung above the bar. I plodded amongst the tables, glancing about, then turned a full one-eighty, and made a show of looking lost.

‘Are you looking for someone?’ said the barman, stepping out from behind the bar to assist me.

‘Is there a, uh… comedy night on here?’ I said, thinking he might wink, throw a lever, and usher me into a hidden backroom spilling over with clandestine levity.

The barman stroked his little blond beard and looked up at the ceiling, as if he couldn’t remember. Eventually, he shook his head. ‘No, I’m sorry. There used to be one here a few months ago, but I don’t know where it went.’

And so that was my open mic mission over for the night.

That’s the thing about open mics, the thing I’ve been pretty fortunate with so far. I’ve referred to them as if they’re these solid, reliable cultural events that run like clockwork and glue communities together, and given the impression that it’s always been easy for me to find them, but the truth is that most open mics are fucking Brigadoon. Run by volunteers on zero budget, they live a parlous existence, phasing in and out of reality, moving location without warning. Many websites set up to tell performers and punters about open mic nights are rarely updated, meaning they end up minefields of false information, sending people to gigs that stopped happening months ago. Even my first gig, Cambridge’s Upbeat Open Mic, got kicked out of its old venue at the Zebra pub less than a fortnight before I was due to visit. The (unpaid) promoter and compere Alex, managed to find the night a new home, let all the regulars know, and attract a full audience in a matter of days, almost entirely through word of mouth. I’ve been working every week since December to track down contacts, find out dates and locations, then arrange some kind of schedule. Even then, there have been cancellations and last minute venue changes. That’s just the way it goes.

But it wasn’t so bad. I was in a foreign city – one I’d never visited before – I had no commitments, and it was early on a Saturday evening. I could do anything I wanted. What a trove of edifying socio-historical delights awaited me!

So I went to McDonalds.

But it was a Dublin McDonalds! I find dining in such homogenised surroundings actually throws small cultural differences into sharper relief, offering me key insights into national ideosyncrasies. And so it was in this particular McDo’s, where most of the righthand wall had been dedicated to a delightfully colourful, high energy mural celebrating Dublin’s abundant cultural diversity: (click for a bigger image) 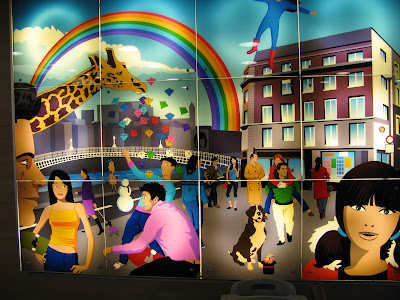 The photo here shows just a portion of the whole mural, which stretches over three times as long. One feature, however, left me puzzled. Why, amongst the frolicking youths, the spray of kites and the uplifting rainbow, has the artist seen fit to depict a furtive overcoated pervert apparently either publicly interfering with himself, or about to throw open the thin tan membrane hiding his revolting atrophied genitals from innocent passersby? 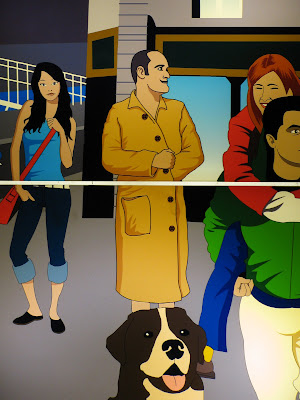 Perhaps the artist misunderstood when head office told him that somewhere in the picture they wanted ‘a smiling man clutching a big mac’.

1 thought on “Dining and Cultural Diversity in Dublin”