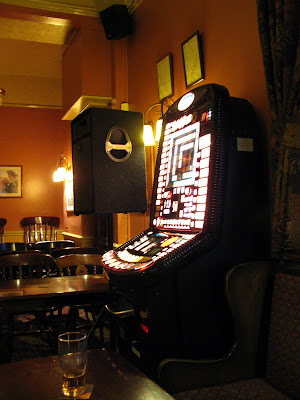 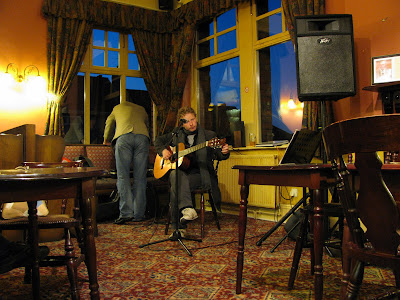 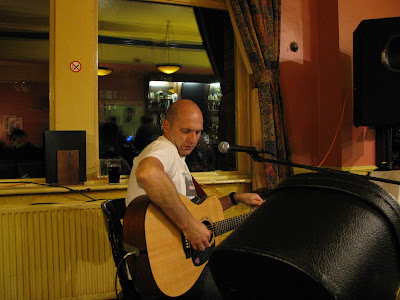 After bailing out on Dublin, the only flight I could get that didn’t cost a pillion pounds was back to Bristol, so I thought hey, brill – I’ll go off piste. Having fallen victim to the parlous nature of open mics, it seemed fitting to take advantage of their ad hoc nature, and find one on the fly. One phone call later, I was on my way to a pub in Knowle, Bristol.

On Facebook, I’d stumbled across a series of music open mics run by a chap called Mark Venus. He runs weekly open mics on Monday, Tuesday, Wednesday, and Thursday, with regular (but not weekly) nights on Friday, Saturday and Sunday, meaning that – sometimes – he ends up doing a full 7 day week of open mics in the West Country. Hardcore.

My brother gave me a lift to the venue, The Knowle Hotel, which, over the phone, Mark had described as ‘a pig to find’. My brother’s car was armed with sat nav, however, so after negotiating a short succession of residential roads, we quickly found the pub. When I went in, Mark, a big bloke with a shaved head and a beard, was setting up in a corner of the back room.

‘Tim?’ he said. ‘All right mate?’ A little stiffly, he held out his hand for me to shake, keeping his bicep flush with his torso and extending his arm from the elbow. It turned out that Mark is an ex-boxer, who had to retire after an injury that sometimes makes it hard to play guitar as well.

As an open mic, anyone could come along and play, but, like most of the stand-up open mics I’d visited, acts had contacted Mark in advance to book a slot. One person had cancelled on him, and another wasn’t answering calls, so he was a bit concerned that there wouldn’t be much of a night on. The bar was about a third full of various locals, including a couple on the round table up the front; the man looked like the geezer off Allinson’s bread, with huge steel-grey mutton chop sideburns and a face wearied by gravity; the lady who was presumably his wife had a shock of frizzy hair the same colour as his sideburns, and wore a black blouse drenched in silver spangles.

Propping up the bar were two guys in rollneck sweaters. While Mark unspooled cables and positioned speakers, one guy lectured his mate in a voice loud enough for the whole room to hear, putting down his cider to free up his index finger for emphatic, pedagogical thrusts.

‘They say cough, you cough, right? They say jump, you jump. They say go over there, you go over there. That’s the way it works, right? When the Argentinians came, there were twenty-two of us. Twenty fucking two! You know how many of them we took out? You know how many? Four-hundred and twenty six. That’s discipline. That’s what proved to Maggie we’d keep fighting, and that’s why she did what she did.’

His friend took a sip of cider, looking dazzled. ‘Yeah, but… I mean it’s like all of these wars, innit? Do we really need to go to war at all?’

‘You got to draw the line somewhere.’ The man repeated his assertion, this time slapping the bar with each syllable. ‘You – got – to – draw – the – line – some – where. You give up the Falklands, right, next you give up Bristol.’ He made a sweeping gesture at the pink walls, fireplace and fruit machine. With this nifty piece of rhetoric, the debate was apparently closed.

Meanwhile, Mark had strapped on his cherry red electro acoustic guitar and stepped up to the mic.

‘This evening is an open mic night,’ he said. ‘So the idea is, if you’ve got a guitar and you can play it, run home and get it. Like David Brent in The Office.’

Look, I know you’d like this blog to be leavened with a healthy dose of ‘man, let me tell you about this guy Crappo McSpaztash I saw last night’, but on this particular night, the standard was top notch. Mark was a great guitarist with a strong, gritty voice, and you can check his myspace if you think I’m being an arselicker. Although, to be fair, he’s a big bloke who I suspect could’ve left me wearing the fruit machine like a zany fiesta bonnet if I’d pissed him off, so I don’t think I was ever going to be criticising the guy in public. At one point he started a song, then shook his head. ‘Right, I bottled that. I’ll try it again in a lower key.’ Then he went into a great bluesy cover of Maggie May, that had people across the room nodding their heads and tapping their feet.

After him was a quiet, nervous-seeming guy in a grey coat and scarf, called Ian. He turned out to be an extremely accomplished guitarist, pulling out lots of jazzy, chilled-out chord progressions, funky little licks and percussive slaps, rapping out a beat on the scratchplate while dropping in acappella sections, singing in a beguiling tremelo, smiling amiably all the while. I chatted to Ian later, and he was a lovely chap. He said he’d always performed in front of audiences, ever since he used to read out Bible passages and suchlike during his father’s sermons. He said he’d pretty much lost his faith now, and he worked three hours a day as a cleaner for McDonalds, but that left him with time to practise, write, and go out to nights to perform.

As he played, high BPM dance bled through from the other bar, the barmaids chucking shapes and giggling. People at the bar and far tables talked over quite a lot of it, but Ian seemed unfazed, and, for all the distractions, a significant number of people, including me, spent his entire set somewhere between impressed and entranced.

‘I spend hours writing songs, learning new techniques, trying to make sense of something I’ve felt,’ he told me afterwards in his quiet, steady, reassuring voice, gesturing towards his heart. ‘It’d be selfish, wouldn’t it, to keep all that in?’

The last chap on, after me, was Steve, another very friendly guy who laughed a lot when I talked to him. He ended up doing a very cool bluesy set, with plenty of slide guitar and powerful vocals. After a bit of probing, he admitted to me that in his daily life, he was a lawyer. It was a bit an odd disjunction, watching a middle-aged middle-class white lawyer playing the blues with such passion and aplomb, but then the blues isn’t about what social strata you’re from, or what job you do – the blues is about feeling.

‘It’s important to me to have something more to my identity,’ he said. ‘Something more than just my day job. We’re all waiting for those gigs where you make some kind of connection, and the rest of it all feels like it’s been worthwhile.’

At the very end of the night, Mark went back up and did one more song, this time with the landlord, Paul, sin
ging. Mark had a music stand with the chords and lyrics on, and they did a cover of some pub standard I can’t quite remember. My dad later told me that the landlord was Paul Cheesley, an exceptional ex-Bristol City player whose promising career was cut short by a nasty knee injury in just the second game of City’s season in the First Division. Paul and Mark seemed to have a good time, although I was a bit pissed by that stage. Afterwards, they both gave me rugged, manly handshakes.

An ex-boxer, an ex-footballer, a lawyer, a cleaner and me… a dabbler with his little ukulele. I ended up getting on really well with Mark, and hopefully, when I’m back in Bristol next month, I’ll meet up for a pint with him and have a proper chat.