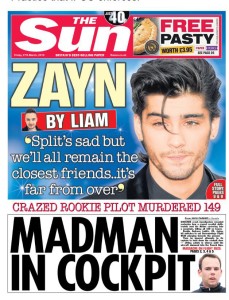 When I first went to the doctor with depression, she described it as ‘the worst case I’ve seen in my career’. I could not speak. I could barely move. She convinced me that accepting help – and medication – for my condition was nothing to be ashamed of.

Today’s British papers, with typical sensitivity, have rushed to blame the terrible events of the Germanwings crash on the lumbering boogieman ‘depression’. The Mail, the Express and the Sun have all run with shrill, fearmongering headlines crying ‘why was he allowed to fly?’

To which, the short, simple answer is: because depression doesn’t correlate with trying to kill people. You fucking muppets.

In all my years of suffering with depression and anxiety, I have never felt the impulse to harm anyone but myself. I don’t know anyone else who has survived either condition who has shown any noticeable increase in aggression as a result.

Here are the increased risks if I, someone who experiences anxiety and depression, were to pilot your plane:

2. I have literally no aviation experience seriously why have you hired me

3. I might not turn up to work because depression makes doing anything incredibly hard

Here’s a thing – somebody who shows up to work and can hold a full conversation probably isn’t suffering from severe depression at that time. Some people can hide it better than others, sure, but depression is severely debilitating. And a history of depression or an experience of ‘burnout’ doesn’t make you ‘a depressive’. It means you’ve been depressed. It’s an experience, not a species. We’re not secret vampires.

I drive a car. I teach large classes of primary and secondary school children every month. I have been allowed to handle and fire a loaded shotgun. Guess how many people have died at my hands?

Not really. Obviously none. Because depression is not a good predictor of killing people. The two do not correlate. They may co-exist. Sometimes someone takes a shit while wearing a fedora. That doesn’t mean a fedora is a laxative.

This isn’t about excusing the massacre of nearly 150 people – it’s about not turning understandable fear into an attack on some of the human beings who need our love and compassion the most. Stigmatising mental illness will not make you safer. Indeed, it will encourage people to hide it who deserve help. Suffering from depression does not put you at higher risk of committing mass murder.

I worry that today’s headlines, and people’s thoughtless reactions to them, are going to make the lives of many tens of thousands of human beings struggling with depression, much, much worse. And they are already in a pretty miserable, bleak place – trust me.

Over the past hundred years, our media has made an art of monetising fear. Beware the immigrants, the Bolsheviks, the madmen. Beware the voiceless. I encourage you to see this practice for what it is. Recognise your own fear, acknowledge it, honour it. It’s okay to be afraid. Just don’t let them hijack it.

(if you’re struggling at the moment, don’t forget organisations like the Samaritans are available for you to speak to)

1 thought on “Depression and the Art Of Mass Murder”