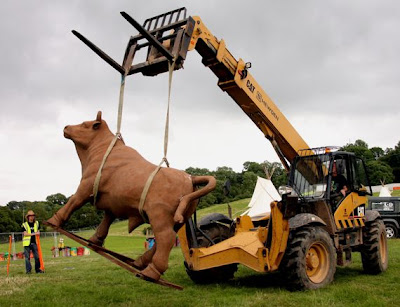 It’s appropriate that Glastonbury is organised by a farmer, because the ancient and fundamental principle of the yearly harvest also applies to the festival – if the weather’s shit, it’ll be shit. I hope that the weather isn’t shit at Glastonbury 2009, because firstly, have you seen the line up? WHAT. It’s actually mental. Blur, Crosby, Stills & Nash, The Yeah Yeah Yeahs, Art Brut, Nick Cave, Roots Manuva, our chums Wave Machines, our chum John Smith opening the Acoustic Stage on Friday, ROLF HARRIS. I repeat – WHAT. You should read through the line-up, because I guarantee there will be someone who I haven’t mentioned who will make you exclaim: ‘Tim – how could you leave out x? x are amazing!’ where x is the name of an artist or band you admire.

I know your AwesomeScanner currently reads: critical density reached, HOWEVER get ready for it to overheat then short out in a blast of sparks, because I’m going to be performing too, as part of performance poetry collective Aisle16. We’re doing half an hour on Friday, Saturday and Sunday in the Cabaret Tent (that massive yellow and blue one in the Circus Field) from 11:40am to 12.10pm. We’re also doing a slightly longer set in the Poetry & Words Tent on Saturday afternoon, 5:15pm-5:55pm. That’s over two hours of Aisle16 – longer than most of the headliners get. I know, I know. We’re incredibly chill.

Come and see us one of those times! It’s poetry but the twist is it’s not shit. If you’re not familiar with Aisle16 allow me to break down the Glastonbury roster into a quintet of crude archetypes: Joe is the sardonic scholar. John Osborne is the kindly uncle. Chris is Michael Douglas in Falling Down. Ross is Charles Bukowski, if instead of being drunk he was just a bit tired. And I’m the sex-pest who takes onlookers’ embarrassed laughter as encouragement.

So yes. Aisle16 at Glastonbury – 11:40am every day in the Cabaret Tent, and 5:15pm on Saturday in the Poetry & Words Tent. Set a reminder on your mobile. You’ll only forget otherwise – you know what you’re like. I’ll also be making a number of solo appearances – catch me wandering dead-eyed across the festival site at 7:30 every morning, clutching a bundle of soiled rags to my chest and howling something about needing medicine for my baby.

In other news, while browsing the Ebury Twitter feed I found a link to this review of We Can’t All Be Astronauts on a blog called The Slammer. It’s a really positive review and I feel chuffed: ‘A less safe pair of hands would make certain passages sound whiny and irritating, but Clare’s passion for the subject matter lifts these moments into a real-life triumph of the underdog tale. His self-deprecating humour is also a major virtue – particularly when it comes to briefly being “Jeffrey Archer’s bitch” on national TV.’ Ha – that first sentence becomes unintentionally damning when you remember that the ‘subject matter’ is me.

Lots of people who’ve read Astronauts have got in touch to let me know what they thought of it. I try to make a point of replying to everyone, but thanks anyway to all the folks who’ve taken the time to write to me. I’m surprised at how many people have said that certain sections resonated with them – it’s obviously struck a chord with a few frustrated artists out there, and it’s been nice to hear that it helped some readers feel slightly less alone in their futile struggle for recognition. Other people just wrote to let me know that they’d laughed at what a twat I am. That’s nice too! I can be a bit of a twat – I’m glad that at least I’m a twat who uses his twattery for the forces of good. Too many twats squander their talent. Stupid twats.