New York spent the 80s gripped by violent crime, fuelled by unemployment and the crack epidemic. By the middle of the decade, its reported crime rate was over 70% higher than the rest of the US. Ordinary people felt that police couldn’t or wouldn’t do anything, that street thugs were basically uncatchable, crime bosses untouchable, that the system had failed.

In the midst of fear and uncertainty, there’s something incredibly attractive, almost cathartic, about the idea of a powerful individual who bucks the system, and takes down the bad guys. 1984 saw the notorious incident where Bernhard Goetz shot four young men on the subway, claiming he thought they were trying to rob him. Goetz remained at large for a week before handing himself in to police. To many, he was an urban folk hero, a regular guy pushed too far who decided to take the law into his own hands.

Around the same time we see the cynical vigilante reach a peak of popularity in movies and comic books: liberal-turned-revenge-killer Paul Kersey in the Death Wish films, uncompromising cop Harry Callahan in the Dirty Harry franchise, Frank Castle, alias The Punisher, and Rorschach in Watchmen. There’s an element of cherry-picking here – the first Dirty Harry movie came out in 1972 (although the series continued till 1988), and fans may object to my lumping The Punisher and Rorschach in with the (ironically) cartoonish Kersey – but I think it points to a very real cultural anxiety at the time. The first Death Wish is set in New York. Frank Castle is living in New York when his family are mown down by criminals in Central Park. The first Dirty Harry movie was originally set in New York. Watchmen opens with Edward ‘The Comedian’ Blake’s murder in New York.

These stories tend to have some common elements. Police are presented, at best, as hopelessly ineffectual – hamstrung by paperwork and the minutiae of jurisprudence, besieged, incompetent – at worst, corrupt, in cahoots with the criminals, unscrupulous developers, etc. The criminal justice system is a farce – expensive lawyers get cases thrown out of court, serial killers plead insanity and dodge jail. All criminals are remorseless, drug-addled jackals with neither family nor history, capable only of hysterical, mirthless glee, rage, or craven cowardice. The incident that pushes the protagonist into vigilantism is almost always a rape.

Most significantly of all, in these stories, the vigilante never kills an innocent man. There’s never a case of mistaken identity, no shot that ricochets off a ghetto blaster and punctures a little girl’s ice cream-smeared jowls – everyone he kills always turns out to be guilty as hell. We’re never forced to face up to the implications of granting one person unchecked power, because yes, he’s angry, but he’s completely infallible.

I’m particularly interested in how this relates to Rorschach in Watchmen. There’s a lot of talk about how Rorschach represents a critique of superhero culture, how he demonstrates that, in real life, a Bruce Wayne style vigilante would, in fact, be a total nutjob – even Alan Moore described him as a ‘fascist’. The problem with all of this, is that, in the world of Watchmen, Rorschach is right. The world is skewed such that he never gets the wrong guy, and the clearest advocate of realpolitik is the straw-pragmatist Ozymandias, who is happy to mass murder innocents in the name of peace. Rorschach is the Last Honest Man, and we end up rooting for what he wants – for the truth to come out – but the only reason we feel this is because he’s never had to face up to the implications of his beliefs. He’s never stabbed the wrong guy.

But you can see how that’s attractive – that sweeping away of nuance, replaced by a reassuring world of absolutes, and the message that the righteous indignation of a determined, decisive individual is more powerful than any system.

It also happens to fit nicely with how video games work. It’s pretty difficult to model nuances of culpability over a ludic framework when your only means of interaction is an eight-way joystick and two buttons. Filing incident reports, defusing domestic disputes and patrolling malls on a Saturday afternoon don’t map well onto 5 minutes of play time. Perhaps this is one reason why Punisher is one of the best side-scrolling beat em ups ever made.

But back to our game this week.

In Vigilante, you must rescue your girlfriend – the amusingly-monikered Madonna – from the Skinheads, a gang ruled by a guy called Giant Devil. Which is such an awesome name for a villain. It’s a 2D sidescroller that takes you through New York, across the Brooklyn Bridge, ending in a climactic battle on the girders of a skyscraper, while Madonna dangles from a crane.

You can see the lineage from Kung-Fu Master – grunts who grapple you while your energy bar runs down, fast one- and two-hit scraps on a 2D plane – but while the graphics are bright and engaging, and some of the boss battles genuinely lots of fun, Vigilante lacks Kung-Fu Master’s purity. Later stages feel cheap rather than challenging. Whereas, in games like Robotron and Time Pilot, you always feel like you have the tools to get out of the hairiest situation just so long as you keep your shit together, Vigilante rushes you with mooks with no art or finesse. Your punches and kicks have an awkward range, and often you’ll end up bouncing between two bad guys as your life drains away. I’ve never worked out how to take out the knife-wielding dudes without dying.

Vigilante was ported to pretty much every home system going, with mixed results. 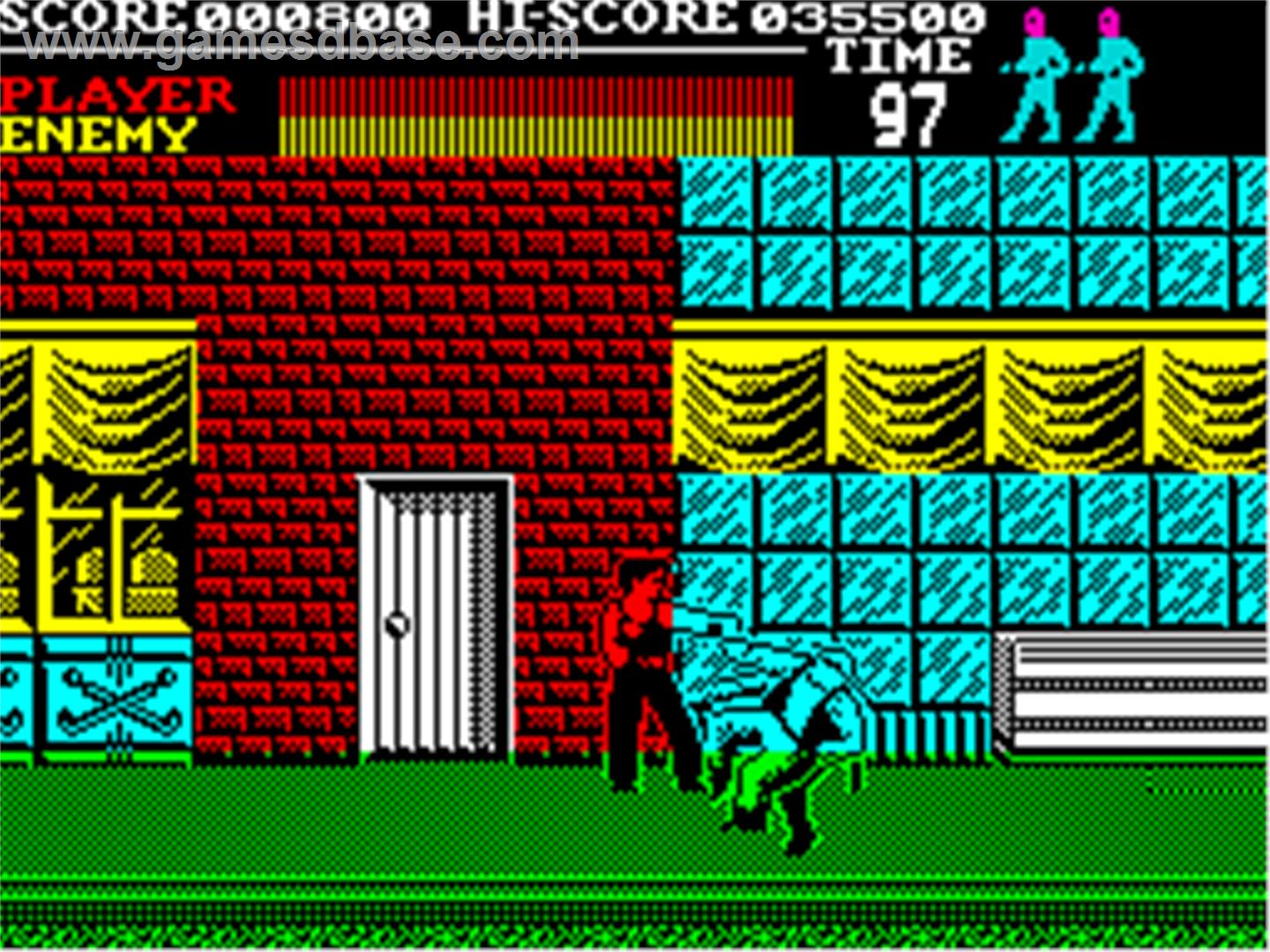 Bad Dudes Vs Dragonninja came out in the same year, adding a second two-dimensional plane á la Shinobi, and substantially raising the bar. A year later, Final Fight mixed the aesthetic of Vigilante with the gameplay pioneered in Renegade, and created a beat em up that became the model for years to come. We’ll look at Final Fight next, because I think – in its depiction of Mike Haggar, mayor of ‘Metro City’, who refuses to be bribed by criminal gangs – it holds a distorted mirror up to the anxieties of the age. Also, it’s wicked.