Renegade is not a classic. Let me level with you right from the off. Sometimes a game gets rendered obsolete by successive iterations (I’m looking at you, Streetfighter II), sometimes everyone was just being mental when they said they liked it.

Renegade was never especially loved, and today, it’s mostly forgotten. But I’ll tell you this: Renegade was damn important.

In the original Japanese version, Nekketsu K’ha Kunio-kun, (or ‘Hot-blooded Tough guy Kunio’) you play a student sticking up for his bullied friend. In the US and European localisations, the white uniforms are replaced by jeans and ripped shirts, and you’re fighting to save your girlfriend from a street gang.

Renegade introduced the 3D playing field to beat em ups. This allows enemies to use rudimentary tactics; they back away, duck, gang up on you – one grabbing your arms while another pummels you. Sure, on the first couple of plays you’ll get absolutely nailed, but once you get used to the odd controls (there’s a left attack and a right attack) and start learning to take on baddies one at a time, the high difficulty makes it thrilling.

Well, for the first couple of stages, anyway. Once you get to the knife-wielding guys who kill you with a single hit, it becomes a bit cheap, but still. In my opinion, Renegade is a better game than the more successful Double Dragon it inspired – the fights feel more focused, and despite the addition of weapons in Double Dragon, there’s something cool about seeing the boss hanging back, waiting till you’ve trounced enough of his or her minions to wade in.

ZX Spectrum owners may remember Ocean’s spinoff title, Target: Renegade. I remember playing it on my little rubber-keyed 48k in my bedroom, the computer plugged into an old black and white TV with a plastic dial that I had to tune in until the white screen and black text of the start screen appeared. I’d type: LOAD “”, (the Spectrum making a click sound effect for each key stroke), press enter, then press play on the little tape deck attached to my computer. The TV and computer were balanced on top of a chest of drawers, and I’d wait the five minutes or so (it felt like hours) until the game loaded. 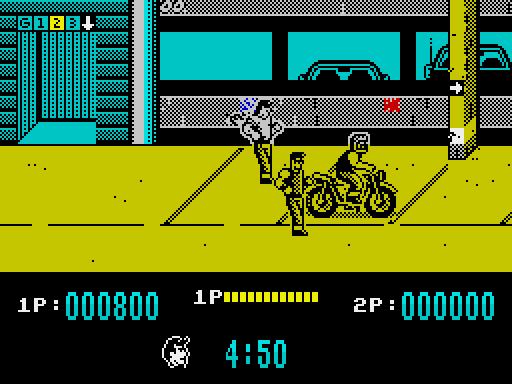 Target: Renegade was particularly memorable for me because, one night, in a fit of pique, I punched the Speccy while playing, and the game glitched out, giving me infinite lives. This was by no means uncommon – the ZX Spectrum used to break in a variety of interesting, occasionally spectacular ways. Often I’d smell burning, then see a finger of stormcloud grey smoke rising from the black power pack. This occasion was particularly cool, because I was playing a beat-em-up – it was as if my frustrated punch had travelled into the game and connected with the hordes of mean dudes.

I still didn’t manage to complete it. The last boss of Target: Renegade, Mr Big, is completely impervious to punches and kicks, and kills you in one move, picking you up and throttling you. You need to bring a pool cue from the previous screen and thrash him to death. My dude dropped the cue just out of reach, and so I watched as Mr Big strangled him over and over, victory and defeat both impossible, like a scene out of one of the Buddhist hells.

Let me know what you think in the comments. Requests for games to cover are welcome. I’m going to be working through beat em ups, but I’m open to all genres and all systems.

1 thought on “Welcome To The Fantasy Zone Presents: Renegade”