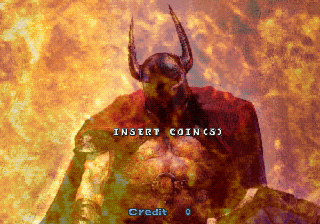 Everyone who ever played a beat em up looks back on Golden Axe with fondness. When I get into pub conversations with anyone from casual gave-games-up-when-they-hit-18 dabblers to hardcore Gamer Til I Die sociopaths, and I mention I’m working on a history of beat em ups, everyone immediately says ‘Oh – do you remember Golden Axe?’

So why doesn’t anyone remember the vastly better sequel?

Look – yes, yes I know I’ve already done Golden Axe, and Golden Axe II is a different game on the Megadrive (more like a remix of its predecessor) but seriously: if you enjoyed Golden Axe and remember it fondly, hunt down a version of The Revenge Of Death Adder post-haste. (if you’re jonesing for some retro Sega fighting goodness right this second, you can play Megadrive fighters in your browser via the SSega site – sadly GA 1 and 2 aren’t amongst the titles available) 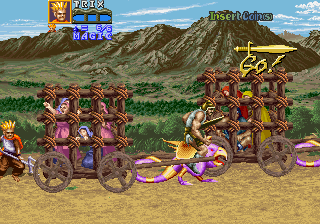 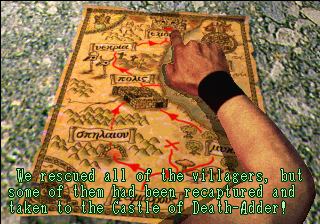 Set years after the defeat of Death Adder in the original game, Revenge sees a new group of four heroes set out to defeat the forces of an apparently revived Death Adder, while kicking as many annoying blue potion-carrying imps as time allows. The four heroes are:

Dora – a ‘kentauride’ or female centaur, armed with one of them pugil sticks they used to have on Gladiators; a bit slow and unwieldy, with moderate strength and weak but easy-to-charge lightning magic

Trix – a blonde elf with a pitchfork; fast, with a handy desperation-move roundhouse kick, good in the air, and equipped with useful-but-not-badass healing magic

Goah – a giant with Golden Axe‘s dwarf, Gilius Thunderhead, riding on his shoulders; a stonecold effing BADASS, cumbersome but powerful, with slow-to-charge but devastating earth magic 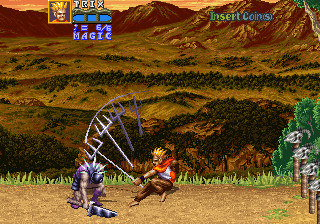 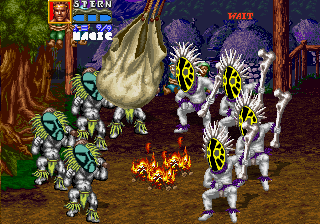 The four characters handle and play differently enough to keep any playthrough feeling fresh. As well as the usual combos created by mashing the attack button, you can double-tap the stick to dash, then hit attack to perform a lunge-attack. You can also press jump and attack simultaneously for a Final Fight style desperation move, which drains your energy bar in exchange for a haymaker of an attack – Stern and Trix get the most out of this. 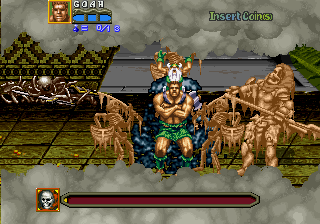 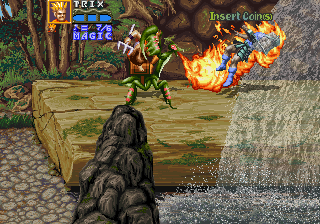 In multiplayer mode – as in The Simpsons beat em up – players can team up to perform special moves on bad guys. There are also a bunch of mounts, from praying mantises that slash foes with serrated pinions before using their mandibles to flip them over their heads, via giant scorpions with electrified stings, to skeleton dragons spitting explosive fireballs. In addition, there are war machines like static catapults, bolt-throwers and mechanical pike-throwers that you can commandeer and use against their creators. What’s more, if you’re on a mount, you can pick up these otherwise static weapons and ride around on your giant scorpion rocking a boulder-chucking sidearm. 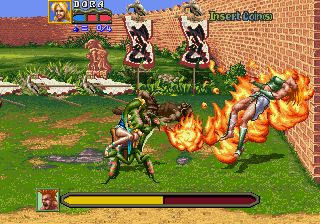 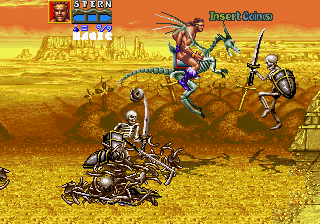 (in case you’re wondering about the potential awkwardness of a woman with a horse’s body riding around on another animal, Dora’s lower-half considerately transmogrifies into normal human legs whenever she climbs onto a mount) 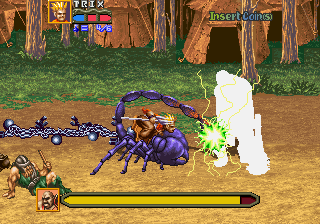 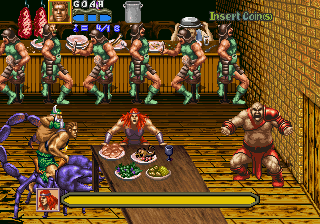 The magic in this game is so cool, too. Again, there’s a tradeoff between power, and the number of potions you need to collect to charge up your ability. Dora has a nice line in low-strength lightning smartbombs, Trix grows a tree which drops apples, which you can pick up to restore your health, Stern’s flamestorm takes 9 potions to charge up but is reasonably powered, but the best magic belongs to Goah and Gilius. 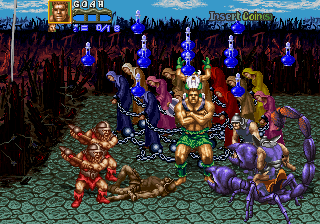 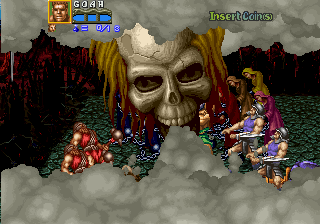 The giant and the dwarf pack a completely batshit insane rock-magic move where the screen floods with smoke and a hairy skull petrifies all visible enemies. If there are any human soldiers in frame, you get a sweet horrified animation of said grunt dying horribly. 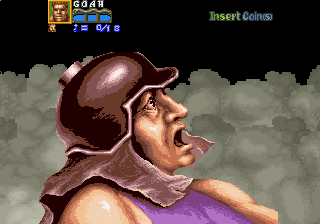 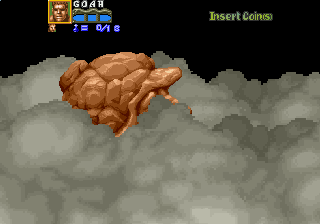 Seriously you non-gender-specific guys, Revenge is that oft-talked-about but rarely found thing: a genuine forgotten classic. It never saw a home system port, and – please correct me if I’m wrong – it’s not yet available via Live Arcade or similar. For whatever reason, it never captured gamers’ imaginations like so many equally-deserving (but far more familiar) titles like Captain Commando, or the previous year’s Knights Of The Round. Maybe Capcom’s stranglehold on the beat em up market made gamers turn their noses up. Maybe, even in 1992, the tide had already turned towards PvP fighters. 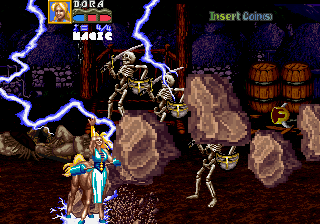 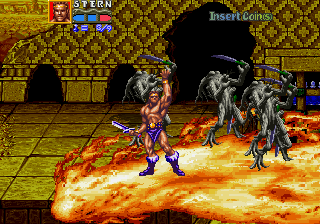 Whatever the reason, this title is criminally underrated. The characters handle well. Fights feel manic but never unfair. Desperation moves and magic, (as well as the aforementioned responsive controls) mean you’ve nearly always got a way out, unless you do something stupid. Boss battles get a little repetitive – there are just three bosses, essentially: the muscled amazonian, the bald hammer-wielding giant, and the scythe-wielding armoured skeleton, but these get reskinned (the giant becoming a one-eyed troll, the amazon getting a mohawk) in an attempt to simulate variety. 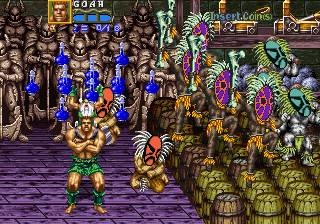 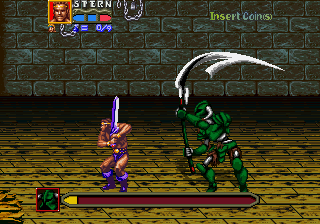 But in the end it doesn’t matter. The main thing is, the boss battles are fun, and the colossal variety of ways to crush your foes on offer makes every level feel different. There are even a couple of stages with branching paths, allowing you to choose what route you take to reach Death Adder. The final Death Adder fight is pretty awesome – especially the first time you try to use magic on him, only to see the monster on his shield open its mouth and suck all your precious potions out of the air. It’s great when video games give you that moment of: oh fuck. I’m in the shit now. 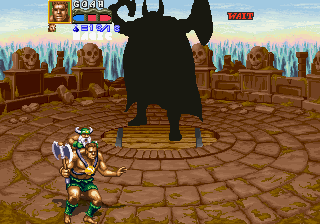 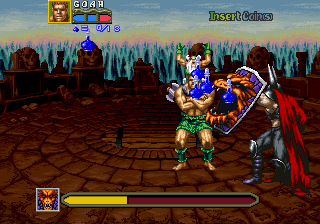 There’s so much more I could say about this title: the sections where you advance, Contra-style, into the screen, the attention to detail in world-building (like the giant beetle that carries you up the cliff towards Death Adder’s castle), the sweet dramatic ending where [MASSIVE SPOILER ALERT] Gilius Thunderhead sacrifices himself to save the others, lodging his axe in Death Adder’s head and falling with him off the back of a dragon, to explode in midair [END OF SPOILERS] but I want to hold back so you’ll have no choice but to play it yourself. 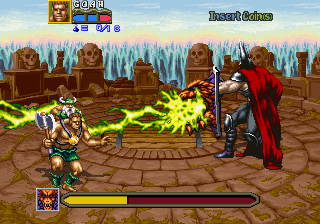 Sure, the use of swords and axes and magic does place it on the fringes of the genre, many preferring the category ‘hack n’ slash’, but who cares? At the end of the day, it’s about kicking the shit out of nasty dudes. That’s good enough for me.

If you’re enjoying this history of beat em ups, do me a solid and share it on Twitter and Facebook. I’ll bet you know some folks who’ll appreciate it too. Hey, and if you’d just take a second to sign up to my monthly newsletter, I can mail you free treats like new mp3s and poems and let you know when I’ve got new stuff available online.