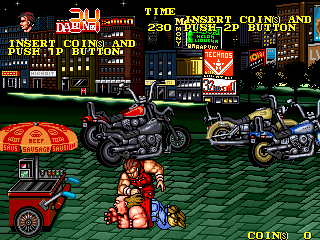 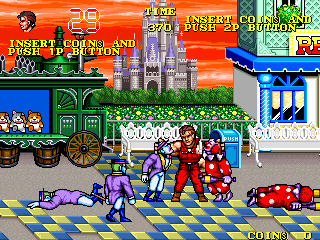 There are a lot of beat em ups neither you nor I remember, and most of them deserve their indefinite detention in the dank oubliette of abandonware obscurity. Because they are f’awful.

But Combatribes dares to ascend to the vertiginous heights of Pretty Good. It’s by no means Great. It might not even be Bags O’ Fun. But it probably comprises a mostly full, singular bag of fun. It’s certainly not so dire as to deserve its status as a game remembered by no one. Seriously – I’d love to hear from you if you recall ever playing this, or even seeing it in an arcade. Or even reading about it in a magazine. But we both know that’s moot, because – as I said before – Combatribes is remembered by no one.

You can pick from one of three brawlers (retconned as cyborgs in the SNES release – possibly a ploy to pacify US censors (x-ref Super Contra vs Super Probotector)), Bullova, Blitz and Beserker, corresponding to power, speed, and namby-pamby all-roundyness respectively. The game supports up to three-person simultaneous play. 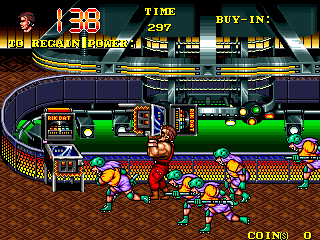 In each level, you face off against a different gang, beginning with bikers in Time Square, and progressing through club-toting clowns in Coney Island, skate-hockey thugs in a disco, punks in a baseball stadium, and paramilitary dudes in a slick high-rise, before the final boss rush down at the docks. Facing off against the skaters – who rush at you in a pack – and the militia with their rifles requires you to switch up your tactics, meaning each level feels like a genuine change, not just the same-old wade n’ thump we’re used to. 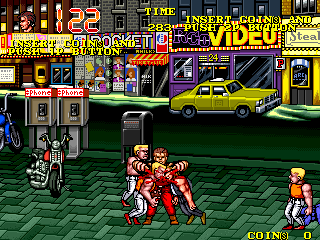 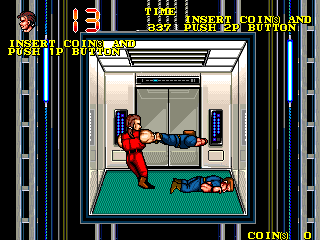 You’ve got some cool moves at your disposal – my favourite is your ability, when surrounded, to grab two opposing foes’ heads and crack them together with a satisfying spurt of blood. You can also pick up motorbikes, pinball machines and go-karts to fling at your enemies, as well as kicking downed foes, or even picking them up by their ankles and swinging them round and round before hurling them back into the melee. 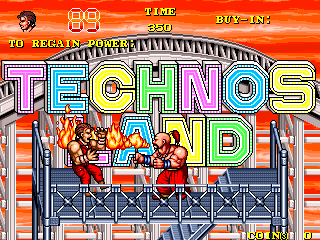 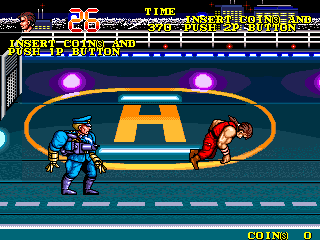 Bosses are, to be honest, Combatribes‘ weak point. They look cool, they seem well-designed, but when you try to battle them it deteriorates into a war of attrition. They range from a punk with a mallet to a quasi-Nazi commandant cyborg with a cannon in his chest but they all more or less play the same way – try to sneak in the odd slap here and there then duck out of the way before he interrupts your combo, dodge back in, another tap, away again, and so on. Most bosses drop their weapon halfway through, making the remainder of the battle a little easier. If you try to hit them when they’re on the ground, most of the time they have a counter. 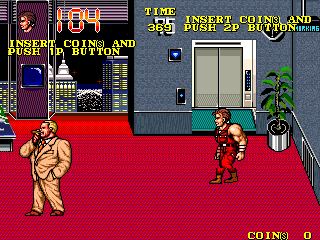 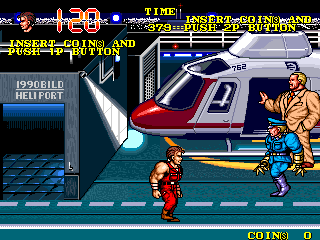 The only boss I did like was the smug, cigar-puffing kingpin you encounter in Act 5. He appears just out of reach, orders his ‘Slaughter Troops’ to take you out, then retreats to the skyscraper roof. You fight your way to the roof, ready for a showdown – he’s the biggest sprite in the game, so you know it’s going to be an unholy rumble – only for him to escape in a helicopter, after setting his cyborg lieutenant on you.

His character is such a familiar one is beat em ups at the time. Look at Belger in Final Fight, or the boss at the end of Streets Of Rage. Popular media absorbed cultural anxieties about New York’s severe crime wave. In these games, the explanation is not urban deprivation or systematic societal inequality and the grave failings of capitalism, but a conspiracy perpetuated by slick developers working hand-in-hand with a ‘secret criminal syndicate’. Of course, corruption in local government and law enforcement was a real and significant problem, but what feels quaintly naive is the games’ belief that, by finding the mastermind and punching him or her in the face enough times, the whole of society can be saved.

An appealing fantasy, and one that underpins most side-scrolling beat em ups. 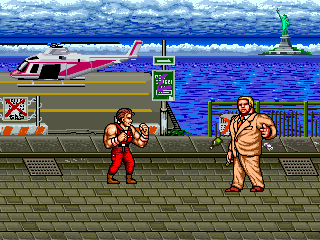 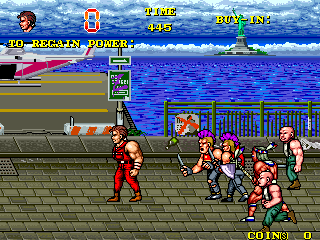 In the next and final stage, he appears at the beginning, only to retreat, forcing you to fight your way through a boss rush consisting of all the previous bosses. It’s a great example of how to build our anticipation and create a sense of narrative with zero dialogue. The greyhound has seen the rabbit. We’re ready to kick this guy’s head in. 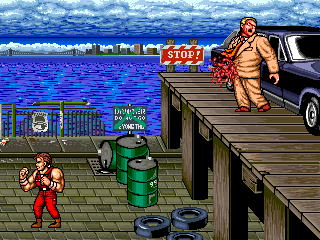 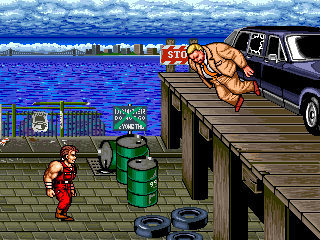 You finally corner the big crime boss at the end of the quay, standing by his car. Great! A showdown! But no – he gets blasted through the chest, slain by the real power behind New York’s criminal gangs: Martha Splatterhead, a lightning-bolt shooting blond cyborg, who you must fight against a backdrop of the Twin Towers. In a game of rock-hard boss fights, it’s easily the toughest. Worse still, if you’re playing with two or three players, she makes clones of herself to even up the odds. 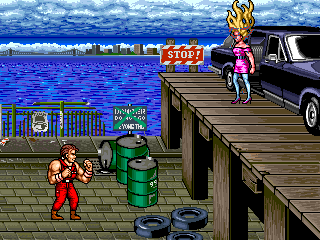 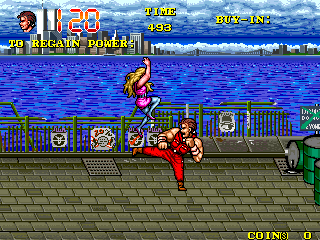 It’s a great tease, and just one example of how Combatribes keeps innovating and surprising. For all its failings (if I’m being brutally sincere the combat is a bit ropey and unresponsive in places) it clearly had a lot of love and hard work put into it, as one might expect from the developers of Renegade and Double Dragon. For whatever reason, the ensemble doesn’t quite come off – proper weapons, not just throwable scenery, would’ve been nice for starters – but it’s certainly worth a revisit, or, more likely, a visit, since no one remembers it. It’s not a classic, but it’s a fascinating curio.

1 thought on “Welcome To The Fantasy Zone Presents: Combatribes”