Over the last few months, in our ongoing history of video games beat em ups, we’ve been looking at the 2D sidescroller: a game where the player character walks along a single plane – usually left to right – punching and kicking waves of marauding goons. It’s a genre that was completely superseded by the move into 3D. I can’t think of a single major title made after ’95 that uses the format. (although I’d love to hear about one, if it exists!) With the rise of mobile/casual gaming, self-conscious retro kitsch and simple formats have enjoyed a resurgence – I’m sure some modern 2D sidescrollers exist. Some might even be not completely shit!

But before we turn to the abundant world of 3D sidescrollers – to finish what we started with Golden Axe and Final Fight – I want to look at a title that stands alone in the world of beat em ups. An abomination too beautiful to live. A proving ground for the most iconic beat em up of all time.

Yet, for all this, it’s a game so obscure that almost no-one, besides video game journalists and marrow-deep nerds (and the Venn diagram for those two groups is barely distinguishable from a circle), has heard of it. 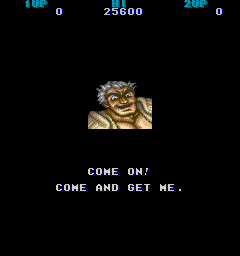 In Paradise City, toothless rouge Muppet ‘Geshita’ has kidnapped not one, but six ladies. It’s not clear what he wants with this wonderfully ethnically-diverse group of women, but he’s keen to provoke you into fighting for their safe return. So off you go. 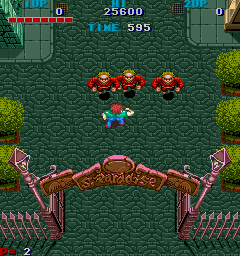 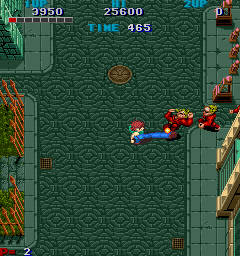 Avengers is more or less unique* in that, intead of viewing the hero from a side-on perspective, the action takes place top-down, moving – for the most part – up the screen, like a shoot-em-up. Within the broader world of gaming it’s a fairly common format – think Ikari Warriors (which this game feels closest to in spirit, if not quality), Smash TV follow-up Total Carnage, Sega’s 1984 vertical-scroller Mister Viking, and Pocky & Rocky. 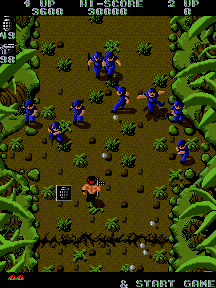 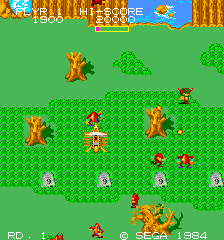 But the other iterations put projectile weapons front-and-centre. They’re shoot em ups where the spaceships have legs – Mister Viking shares far more DNA with Konami’s Twinbee of the following year than it does with Avengers – and the small sprites / broad perspective format allows for huge melees where you take on a dozen enemies simultaneously, dodging shots while returning fire.

In Avengers, you can punch, kick, or press both buttons together to do a roundhouse kick (which, unlike later Capcom beat em ups, does not drain your energy). Your effective range is about half the length of your sprite. This means that most of the screen is taken up with empty space, or the occasionally enemy flinging a bomb, mocking your pathetic reach. 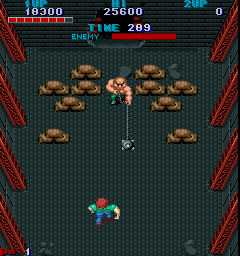 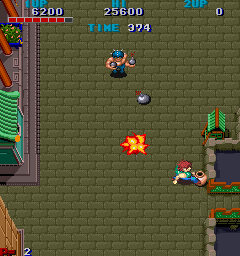 Throughout the game, 60% of the baddies you face are the same red-suited, blond-haired dude, who rushes you and hugs you, draining energy, á la Kung Fu. They can be downed with one hit. Although you’ve got 8-directional movement, it’s tough to line up your weedy little punches and kicks with the enemies, meaning most of the game is spent waggling the joystick to shake off thugs, before mashing the kick button. Meanwhile, the collision-detection with projectiles is awful – sometimes you can seemingly stand in the middle of a bomb blast and not get injured, at other times a dagger catches you even though you’re apparently out of range. 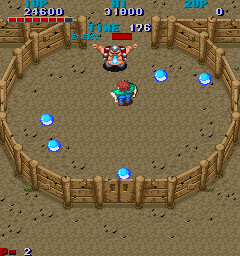 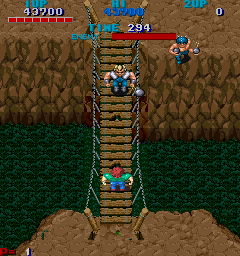 The bosses break up the monotony a bit – they range from a guy swinging a ball-and-chain to a warthog inside an arena who vomits blue fireballs. There’s even a one-on-one duel across a rope bridge where, at the end, you get to kick the other guy off into the jungle valley below (serves him right for cheating – he has a guy on the other cliff hurling bombs). Each battle l0oks like it’s going to demand you exploit the game mechanics in some new way, overcoming your opponent with patience and skill, but in practice the bosses are way too tough, to the point of ridiculousness. The rope bridge duel is a case in point – several times I lost because the timer ran down, unable to land a single hit on my foe. I don’t mind rockhard challenges, but Avengers is just a fistful of dry dogeggs.

It’s a real shame, because – from the screenshots – Avengers looks like it should be super-cool. Sadly, it drags the top-down vertical-scroller into an idiom for which it is chronically unsuited. There is a happy ending to this story, however.

The director of Avengers, Takashi Nishiyama, went on to co-plan another beat em up for Capcom. *puts on David Brent voice* A little one-on-one vs fighter… called Street Fighter.

It just goes to show kids – sometimes the best way to learn is to balls up something really badly. It’s how I do it!

See you next Tuesday as our odyssey takes us into the third dimension… of punching.

1 thought on “Welcome To The Fantasy Zone Presents: Avengers”