I haven’t been on holiday, on an actual, bona fide, you’re-here-to-relax-not-to-do-work vacation, since I was in sixth form. This is partly because I’m very lucky to do a job that I enjoy, nay love, that sees me heading off to all sorts of interesting places, and a whole slew of festivals, and getting paid to do so. I often feel like I’m a bit on holiday. Even when I have to fill in applications or calculate tax returns, I rarely feel under the cosh because I largely get to dictate the terms under which I do them, I’m at home with a cup of tea and my own music, and it’s in the service of stuff I care about (creative stuff and me), rather than marginally advancing the interests of a multinational insurance conglomerate.

But by the same token, I rarely feel like I’m totally off-duty. There’s always work that can be done – right now I have a chapter of the next book that should have already been finished, I’ve got a new performance poem I should have learned, another I want to rewrite, and there are three uke tunes sans lyrics that I want to finish and try out in music sets. That’s all stuff outside of the tasks that are taking up my day-to-day workload at the moment, and I feel a bit twitchy if I can’t check my email multiple times a day, even on weekends. Let me make my position clear as an unmuddied lake sir – I’m not complaining. I feel very grateful that I get to lead the lifestyle I do and I wouldn’t want to go back to office drudgery for the world. All I’m saying is, it gets a bit muddled, without a clear dividing line between work and play.

So anyways, on a whim, in fact, a super-whim, I ended up booking a four-day trip to Tuscany in August. Then I bought a book on Tuscany to find out where we were actually going, and if there was anything worthwhile there. Of course there was. (click on pics for big versions) 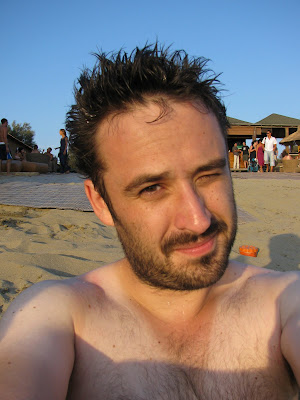 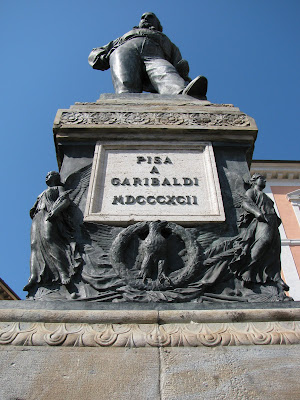 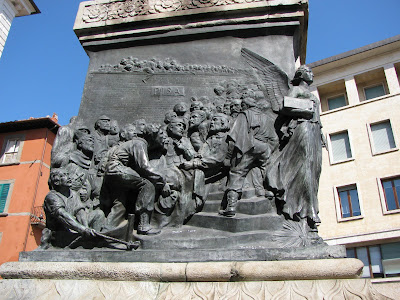 This is a detail from the plinth of a statue of Giuseppe Garibaldi in Pisa. Garibaldi was a military commander who believed in universal sufferage, an end to the dominance of the Church, and the unification of an independent Italy. The Garibaldi biscuit was named after him, after he turned up in Tyneside in 1854 and acted all matey with the working classes, who saw him as something of a hero and gave him a sword. Garibaldis are pretty fucking blah biscuits if you ask me – only elderly misanthropes and the mentally subnormal would count them amongst their top five. 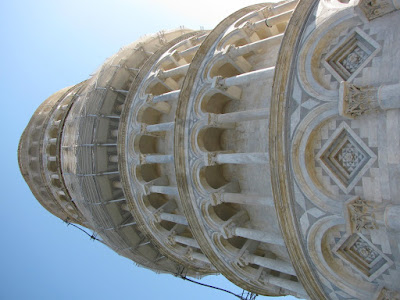 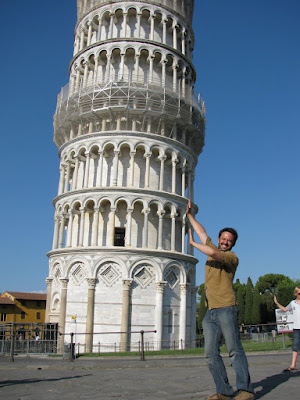 Yep. The Leaning Tower. And me doing a goofy clichéd posed like the soulless whore-ist I truly am. We flew into Pisa Airport, and it was a case of either deliberately ignoring the Leaning Tower for the whole time, or sucking it up and embrace our inner ersatz sightseers. The tower leans because the local soil it’s built on is soft and silty – awesome for putting a tent up on, not so great for supporting a massive heavy cylinder. They actually corrected some of its lean a few years back, after fears it was going to topple over. Apparently it’s now close to the angle it stood at in the nineteenth century. I’m not sure I care that much, but I was glad I went to see it. It looked pretty cool up close. Also there were tat stalls everywhere, and after some frankly disappointing encounters with souvenir vendors it was gratifying to see a decent range of proper genuine tat, often only tangentally related to the Tower, occasionally completely irrelevant, like big ass knives. ‘Oh hey peach, I went to the Leaning Tower of Pisa and I brought you back this massive blade. Enjoy!’ 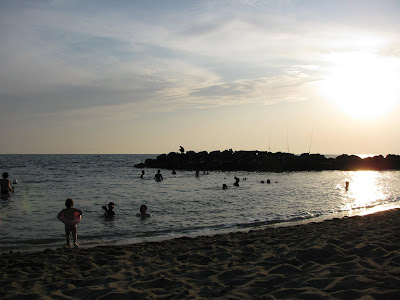 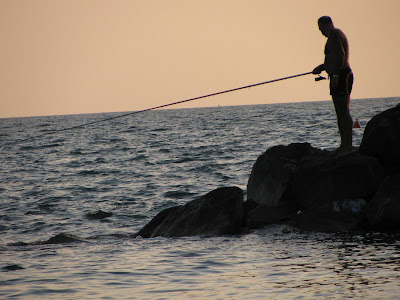 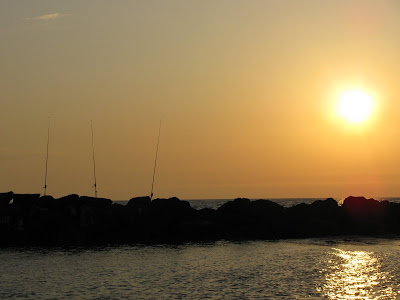 Some of my favourite time was spent drinking and not attempting to achieve anything worthy at all. We camped in Marina di Pisa, which is a coastal resort area just outside Pisa, developed under Mussolini in the 30s and largely populated by retirees who bring their chairs out onto the street at night and sit and chat, staring out across the Mediterranean. And who can blame them?

There are some rocky beaches, then a whole series of cramped, sandy private beaches which you’re supposed to pay to use. One belonged to the campsite, so we got to use that free. I want to tell you it was tacky and grim, but I had a lovely time. Sure, it made me appreciate how lucky we are in Britain to have some beautiful, expansive public beaches, but at the same time the blue, cloudless sky, the blazing sun and the warm, lapping ocean made me appreciate how lucky I w
as not to be stuck in Skegness. In the morning, the camping site staff would lug a big speaker down onto the beach, which promptly started blaring out pounding Eurodisco. Just what you need while you’re dozing quietly – something to wake that nascent hangover fizzing in your cranium! I soon got over my dismay, however, when I realised that the music signalled the start of aqua aerobics. A girl from the site stood on the shore doing various punchy-clappy moves, while people in the sea faced her and tried to keep up. I joined in, even though I was pretty much the only male involved for most of it. Even though most of her moves looked suitable for the over-65s, I was struggling to keep pace after a while, perhaps because I was standing in chest-deep water, because I wanted to be behind most of the participants so they couldn’t see me.

After seven each evening, staff rolled out matting and the beach became a boozy night spot. There was a cocktail bar up the top and lots of big candles. I really enjoyed getting pissed there, even if it was incredibly cheesy, the mood underscored by endless smooth ambient dance tracks with bizzarely literal lyrics pacing the ongoing reality like ‘We’re on a beach / the sun is setting / so warm and beautiful / it’s the evening and we’re here with each other’. I know. Fucking shut up and help me pour this Southern Comfort down my throat. 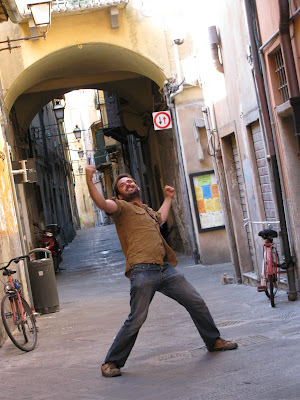 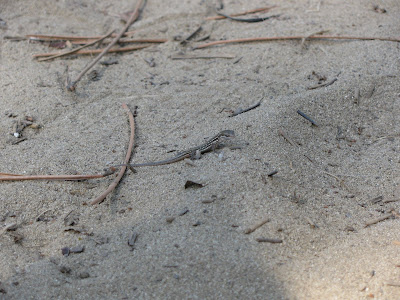 There were a whole messload of lizards in the campsite. This pic is of a baby one. They’re very cute and amazing up close, but they move like shit off a greased shovel and I wouldn’t have appreciated waking up with one skittering round the tent or gnashing at my exposed corneas. Not one bit! 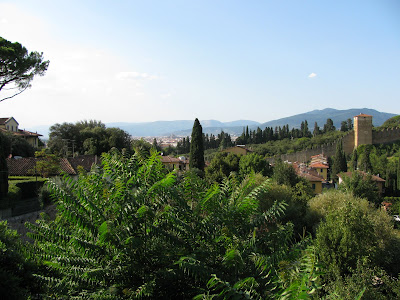 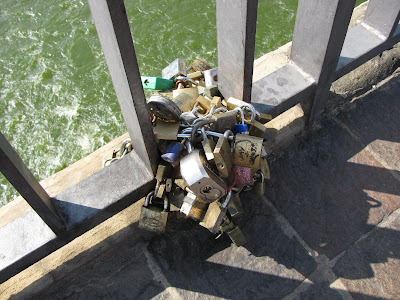 So we did a day trip to Florence, and when we crossed over the bridge to south of the River Arno, we found this cluster of padlocks chained to the railings, as if they’d accrued there like weird barnacles. As far as I could tell, each padlock seems to have the name of a couple written on it. Perhaps they’re sort of like carving your names into a tree – only shitloads of couples have done it now, so it’s like a vast ungainly schmaltz orgy, with the original lovers buried corroding and forgotten beneath the ever-growing heap of new ones. Sort of like a metaphor for how we eventually forget about and in our turn are forgotten by everyone we’ve ever known or cared about, smothered by a procession of newer, shinier people and memories. That might not sound very romantic, but frankly, if your idea of love is a padlock with no key then you’ve already set the tone, you shambling co-dependent twatmunch. 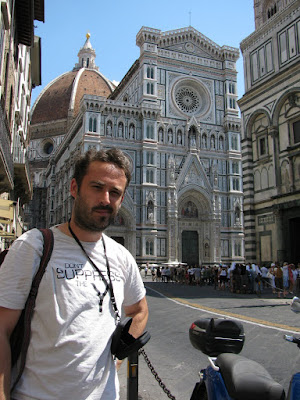 Yeah so Florence had some architecture and art and all that jazz and some of the buildings were quite impressive. I was more about the ice cream, though – we hit up gelateri every day, if only to fight back against the intense heat. I had some awesome mango flavoured ice cream, and the Nutella cone I had was a super-strong choice that I feel proud of even as I relate it now. Also, one night in Marina di Pisa I got a delicious seafood pizza that was covered in fresh mussels. By the time I’d finished I had a big stack of shells next to my plate and I was beaming with replete contentment.

So yes, that is my first – and probably only – genuine ‘What I Did On My Holidays’ post of the entire year. I sweated lots, relaxed, drank too much Diet Coke, often felt deliriously happy, rode buses without tickets, bailed on a half-paid bar tab, and did a whole bunch of other stuff that’s none of your goddamn business.