I was on my way to the train station this morning when I happened upon this sign in a Turkish grocer’s window: 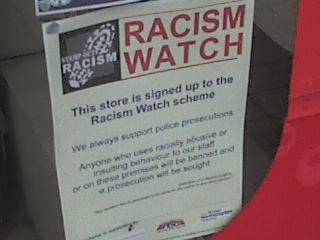 Initiatives like this are, of course, to be lauded. With the economic downturn biting huge chunks out of manufacturing and retail, we’re constantly being told that rising unemployment equals white, working class disillusionment equals increased racism.

My main problem with this whole line of argument is that sometimes, it sounds perilously close to an excuse. I mean, you’re either a bigot or you’re not. Your employment status can’t have any bearing on that.

‘All right, Keith? Heard you got laid off. How you bearing up, mate?’

‘Yeah. Since the factory closed down I’ve gone right off Venezuelans. I can’t be bothered with them.’

Ensuring every citizen has a decent standard of living and opportunities for gainful employment should be one of our central aims as a society, but the media needs to be careful not to act as unwitting apologist for ignorance and prejudice. Much of the coverage of the recent wildcat strikes was padded out with editorial reflections on a wider social malaise spreading through white, working class Britain, with a tone of ‘the government needs to nip this in the bud, otherwise there’ll be a fascist resurgence and we’ll only have ourselves to blame’.

I’m not suggesting that legitimate concerns about a depressed domestic market for skilled labour are tantamount to frothing xenophobia, nor, on the other hand, do I think that short-sighted protectionism and the concomitant suppression of foreign investment are good ideas, but no matter what the economic circumstances, racism is inexcusable. I mean, I don’t think I’m being overly simplistic here. I believe in freedom of speech and allowing ideologies to slug it out in a free marketplace of ideas, but there is no place in modern Britain for the BNP’s brand of ugly, craven demagoguery. They don’t even have the guts to publicly admit to their own bigotry.

I rarely have much sympathy for the current government, but they’ve got a difficult task ahead when throngs of disaffected workers with a hazy grasp of economic fundamentals show far more interest in the old-fashioned culture of scapegoating and easy answers, than in the dull but workable long-term strategies that will get our country out of recession. A recession brings many challenges, but it doesn’t necessarily imply incompetence on the part of the government. Indeed, it can help correct inflated markets and help make living affordable again for the average worker. We need to be intelligent, and compassionate, and look at ways of managing the human consequences of economic upheaval, rather than analysising things purely in terms of dry data, but the bottom line is, racism is unacceptable under all circumstances. Treating sections of the British workforce as a kind of hivemind whose beliefs are uniquely vulnerable to the vagaries of world markets is patronising and dehumanising. Anybody who chooses to embrace bigotry is personally accountable for their decision.

Of course, it’s easier to preach a ‘racism is bad’ line to the converted than to take an honest personal inventory of one’s prejudices, or to contribute something positive. Imagine my surprise, for example, when I glanced behind the ‘Racism Watch’ poster, to see this caricature of a pigtailed, conical-hat clad South East Asian gentleman, on a board inside the shop: 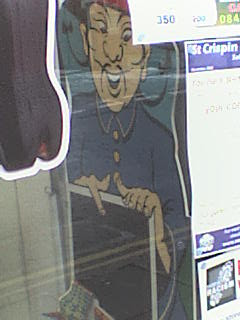 Admittedly, the blackboard at which he is pointing with apparent delight did not read: ‘This Image Is Representative Of All Chinese Men’, so it’s probably mere cultural insensitivity rather than fully-fledged racism. Still, it just goes to show that none of us should rest on our laurels, and that all Turks are unreconstructed xenophobes.