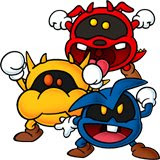 So, if you’ve been following this blog, you may have wondered about the distinct lack of open mic related updates. Am I keeping them secret? What’s going on?

The fact is, for the past few days, I’ve been laid up in bed, at home, with a heavy cold. My head’s been pounding, I’ve felt groggy and shivery, I’ve had a hacking cough, and my sinuses have been going at it like a Mr Whippy dispenser, producing mucus of varying viscosity, from the drip-drip prepubescent runny nose stuff to great rubbery white clots like chunks of scampi.

To be honest, I can’t say I’m too disappointed. I desperately, desperately wanted a break. I’ve been amazed and embarrassed by how much the journey has taken out of me. I’ve only done 9 open mic nights so far, and by the end I felt totally baffled and overwhelmed by the process. I suppose it wasn’t just about the performing side of things, but all the travelling, and the unpredictability of each night and audience, and having to work across different genres, and the sensory overload of seeing all the different acts and meeting new people and finding my way around a new town every day. When I finally got back to Cambridge, flushed and half-delirious, I went straight to bed, only to dream that I was at an open mic night, with my family and some friends, in what seemed to be some kind of secondary school classroom, and my dad said he was going to do a turn, and then a 10-year-old kid stood up and started doing this really sweary stand-up routine, and at first everyone was laughing, then his material turned really racist, and rather than object I just sat there covering my face with my hands and wanting it to end. I don’t know what any of that means, but if you count dream open mics as events, my total count is 10.

But I suppose I’m concerned that, at the moment, my journey round open mic nights is shaping up to be something of a pipsqueak odyssey. After a month mooching around the flat, loathing our noisy downstairs neighbours and steadily going all kinds of Rear Window crazy, I was really looking forward to spending a load of time on the road, meeting new people, stretching myself as a performer, and getting to know the country I’ve lived all my life in but never really explored.

Now, I’m less sure. It might just be because I’m still ill, snotty, sore-throated and tired – the postman just came with two massive parcels for my flatmate, and by the time I’d carried them up the stairs back to the flat, my skull was throbbing and I couldn’t keep my balance. In the same way that I find it near-impossible to go food shopping when I’ve just eaten, it’s hard to picture myself merrily hopping onto trains, booking accomodation, finding my way around new cities, doing gigs, and chatting to people when I’m wrapped in a blanket, shivering and snorting bogeys back up through my inflamed nostrils.

On the morning of Easter Sunday, I lay in bed, swimming in and out of a feverish daze. One thing I realised was that, if I were to attend all the open mic nights I’d put into my itinerary, I would end up doing exactly 40. Maybe it was because it was Easter, but this made me think of Jesus’ 40 days in the desert. My memory of this story is that Satan appears to Jesus at the end, and tries to tempt him, first by suggesting he turn stones into bread so he can have something to eat, secondly by encouraging him to leap off the top of the temple and get caught by angels, thus proving his divinity, and thirdly by offering him all the kingdoms on Earth. Metaphorically, you might see them as the temptations of physical pleasure, looking awesome, and wielding great influence.

And as I pawed at my sweaty brow, rolling over and over in search of a comfortable spot that didn’t exist, I thought – without irony – ‘yeah, I look to performing to bring me those things – so that’s a bit like my situation, isn’t it?’

So that’s the latest dispatch from the Open Mic car crash. Less than two weeks in and I think I’m Jesus.