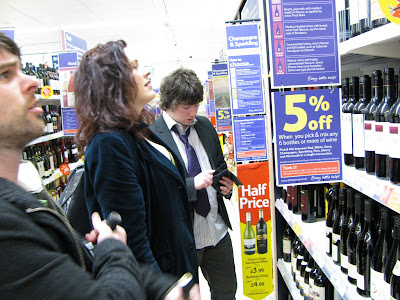 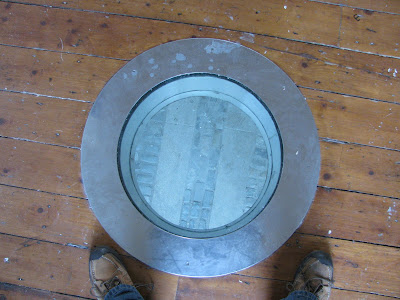 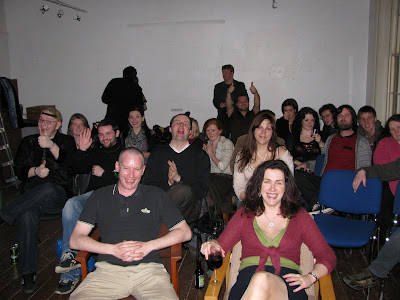 So, after a Facebook invite from Marcus Keeley, I flew over to Belfast to join in with the Make Yourself Heard open mic at the Safehouse Arts Centre. When I got into my taxi from the airport, the cab driver said: ‘It’s been a strange day. First it was sunny, then it was raining, now it’s sunny again.’ I looked up into the sky to the east, and it was split right down the middle, with beautiful blue sky on one side, and fulminating dark clouds on the other.

After talking in a previous post about searching for a solid place to stand, it was interesting to do an open mic where the performance spot is on a reinforced glass disc, which gives you the disconcerting feeling of hovering above a cobbled street. Everybody brought booze to the event, and, because it was Good Friday and the pubs closed early, a lot of the audience and performers ended up staying and drinking until gone 1 in the morning. I was starting to feel groggy from my emerging cold, and so I kind of shuffled awkwardly on the drinking sidelines, while the MYH stalwarts showed me how it was done. As the evening went on it got more and more raucous, but most people still showed an impressive level of courtesy and respect to the performers, listening attentively to the quiet stuff, whooping and applauding at the rowdy stuff. In the spirit of the night, when it came to my turn I tried out a new poem, which definitely needs some editing, but may be salvagable.

By the time it was all through, I was knackered. I think I’d grossly underestimated just how much energy visiting these open mic nights would take. Not just the performing to wildly different audiences with a whole host of varying expectations, but also the travelling, and the watching other acts. I reckon that in about 10 days, I’ve seen almost 200 different performers! And, you know, because they’re all new, and so unique, I’ve got really vivid memories of all of them, so my sense of how much time has elapsed has expanded like an accordion.

That aside, I enjoyed getting to fly again. I haven’t done it for a while, and I still spend the majority of the journey in a state of baffled amazement that I’m on a chair in the sky. On the flight over, I sat by the wing, and stared out, watching it flex and judder in the wind. Really all I need to do now is do a poo while on a plane, and I’ll have completed my sense of utter superiority over all humans who lived before the twentieth century. ‘Fuck you Copernicus! Fuck you Newton! I’m shitting in the sky!’ Even Merlin never pulled moves that sweet.