Happy Christmas and welcome to Death Of 1000 Cuts – making you an awesome writer, one cut at a time.

I hope you’re having/have had a pleasant yuletide replete with small, discrete, flavour-rich events which you can observe and later exploit in your fiction. Reviewers will quote these specific, idiosyncratic moments with approval, and you will feel the warm glow of knowing that failing to be emotionally present for most of your life’s major events was worth it.

This week, since it’s Christmas, I decided to give something back. Instead of ripping apart one of your efforts, I offer up a sacrificial short story for your festive amusement. By all means eviscerate it in the comments section below, or email me searing criticisms via the ‘Contact Me’ link on the right. Come at me, bros. Or, if you prefer, just enjoy it.

If you like the story – or even if you don’t – remember that pre-ordering my first novel, The Honours, is just a click away. It’s out at the beginning of April and, if your Chrimbo swag haul has been a tad light on great books, why not give yourself permission to get an extra present for yourself and for me, and click the link. It made the Huffington Post’s Best Debuts list for 2015, so, you know. You’ll like it. 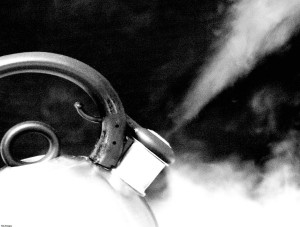 A Case Of The Vapers

Hilda did not mind when Dr Shoepenny published her research on aetheric transduction under his own name. She laboured not for glory, but for the furtherance of science, and besides, she reasoned, her findings might be taken more seriously if they appeared to have been reached by a man.

When Dr Shoepenny presented her theories on the Interstitial Noetic Miasma at the Royal College without crediting her, she bit her lip. She was, after all, only his assistant, and much of her work would have been impossible without access to his laboratory, a corner of which he permitted her to use outside of working hours, Hilda toiling by the light of single sputtering gas mantle while the doctor played cribbage in Boodle’s or slept off his dozenth glass of port-wine in his green leather club chair.

But what Hilda could not accept – what pushed her from infelicitous forbearance to outright mutiny – was being murdered.

The act itself had been mercifully quick – a drunken Shoepenny striking her on the head with a storm glass and placing her unconscious body within the vaporisation chamber of her prototype Aetheric Transduction Inducer. The machine had emitted a couple of bronchial coughs; the chamber had opened; a faint numinous wisp had risen through the skylight.

And a fortnight later, at the invention’s grand unveiling, as Dr Shoepenny told an auditorium full of scientists, business owners and newspapermen how he had come to create the marvel he now called The Vape-o-Matic, that same faint mist began spilling through an open window behind him and condensing on the floor tiles.

Vapour is a bridge between states. It is change. It thickens in the air like a kiss.

A word appeared in the steamed-up pane, like letters drawn with a fingertip upon a wet mirror: LIAR

The audience – whose attention until this point had been monopolised by Dr Shoeberry’s hideous shirt – began to gasp. The doctor took this as evidence of his consummate showmanship and continued, oblivious to the puddles of clear jelly clotting on the floor, congealing into fingers, earlobes, a long throat, a silver seashell belt clasp. He was not sure quite what the machine did, or how – he knew only that it was his right to explain it. Science was about the patient, replicable construction of models, not hysteria.

Hilda rose from the floor, her hair still damp and steaming. Dr Shoeberry saw her and screamed.

She had eyes like moons in fog, or ship’s lanterns, or the smell of old thunder. When she spoke, her voice had the terrible, breathless timbre of a distant storm, or a pan of water just about to boil.

‘We have reached a moment of transition,’ said Hilda, clouds billowing from the hollow of her mouth. She turned to the crowd. ‘Does anyone have any questions?’