Following on from yesterday’s post about MS Paint Adventures, I thought I’d point you in the direction of some funbox online adventure games.

If you head to the ‘Games’ section of the Homestar Runner website, you can play a whole bunch o’ affectionate parodies that are actually pretty sweet games in their own right.

The closest to MS Paint Adventure’s ‘Problem Sleuth’ is ‘Dangeresque – Roomisode 1: Behind The Dangerdesque’. Problem Sleuth creator Andrew Hussie is an avowed fan of Homestar Runner, and the two share a lot of influences. 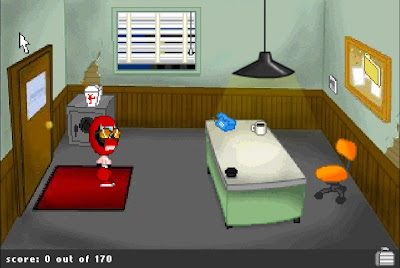 Here, you play hard-boiled detective Dangeresque (played by regular Homestar Runner character, Strong Bad, a brash luchador who’s always cooking up mischief), who has to try to solve a case without leaving his office. It’s a fun little mystery, with the usual pleasures and surprises of the point n’ click system, and it reminds me of Sam & Max Hit The Road, which can only be a clamorously ringing endorsement. 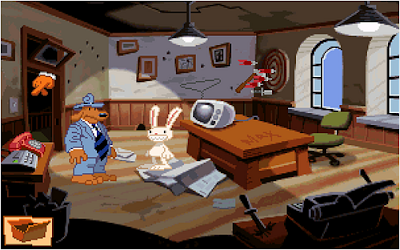 Peasant’s Quest is a tidy little parody of the old Sierra game King’s Quest. It uses a combination of controlling your character with the cursor keys and typing in verb commands to LOOK, GET, USE, etc:

Finally, for hardcore retrophiles, there’s Thy Dungeonman, a spoof sword n’ scorcery text adventure. Took me right back to my days playing Guild of Thieves on my Dad’s green screen Amstrad, it did. He only had a pirate copy and the copy protection kicked in after a hundred moves, rendering it tantalisingly unplayable. I still found the diamond ring hidden inside the billiard ball, though. 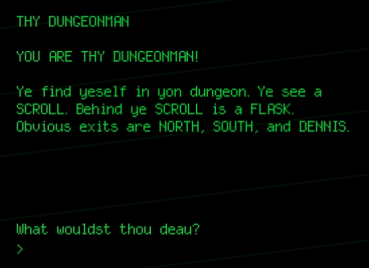 1 thought on “Choose Your Own Adventure”