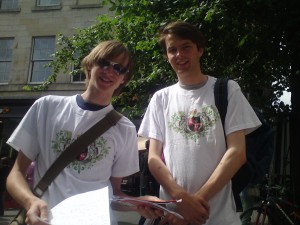 On Tuesday morning, I grumpily slogged through the driving rain to set up shop on Edinburgh Fringe’s Royal Mile. It took me ages to set up the complicated camping table, and my graphic design skills aren’t up to much, so the sign I drew in black marker on the spot looked a little forlorn.

To be honest, I felt a bit shy. See, the original reason I wanted to do the Poetry Takeaway is because I thought it would be fun. People would come and order poems, then I and an eager cohort of likeminded wordsmiths would knock them out in ten minutes or less. I’ve always really enjoyed doing speed poetry, mainly because it helps me get past that awful fear of the blank page – that positive but often debilitating desire to make every word count.

So I unfolded my cheap camping chairs and laid out my pens and paper and tried to affect a welcoming smile. And… people came. The first two customers were the chaps in the picture above – they were fliering for a show, and they simply wanted a poem about Arnold Schwarzenegger. 10 minutes later, and there they are, gamely posing with said verse. Want to know how they poem went? Well tough, you can’t. It’s an exclusive, a one-off. It’s theirs.

Next was a poem about rubber ducks and Russian dolls, which gave me a golden opportunity to pitch Dean Parkin’s brilliant poetry and storytelling show, Dean’s Dad’s Ducks (do go see it if you get the chance – it wasn’t just funny but properly moving). Soon I had been joined on the stall by a gang of Hammer & Tongue poets, and they made me look like a right pranny by taking to the stall like, well, rubber ducks to water. Dressed in high vis jacket and policeman’s helmet, Pete The Temp steered pedestrians towards the Takeaway, where poets like Ashley French and Michelle Madsen took their orders and set about writing their poems. We served a magician, a street-sweeper, I wrote a poem partly in Mandarin to a customer from China (and in return was taught how to say ‘I am a poet in Mandarin’ – a tricky little sentence that uses all four tonal variations in just four syllables), there was a poem about a dragon, a poem about a skateboarding velociraptor by Mark Grist, we delivered a poem to the Fringe Office after they placed an order, I got photographed with a little girl who is due to start school next week after writing her a poem about all the things she likes at the Fringe, we had a peculiar request for a love poem from a guy who had his flies undone throughout, we did street performances, there was laughter, applause, even small squeals of delight… and at some point I realised that I wasn’t grumpy or self-conscious anymore.

I was having fun.

The Poetry Takeaway might be a bit ramshackle, and it might not look like much (yet), but I have to say it was the most fun I’ve had at the Fringe yet. The poets staffing the Takeaway were brilliant, and we got to meet a whole succession of people and have interesting, genuine conversations. It tells you a lot about someone by what sort of poem they ask for, and so in a very short space of time you have a series of weird and wonderful encounters.

The Poetry Takeaway returns this Friday the 13th, 11am-6pm, outside the Tron (opposite Starbucks on the bottom end of the Mile). It’s going to be bigger and better, with even more poets. We’re also planning some late-night guerrilla poetry sessions, where the Poetry Takeaway goes out on a delivery run and hits the bars and pubs of the Fringe, sating drunken punters hunger for bespoke poems in ten minutes or less. Table service! Look out for us.