Released in Asia as Crime Fighters 2, Vendetta was Konami’s follow-up to crappy 1989 title Crime Fighters, a sub-par version of Final Fight with one of my coin-op pet hates – a numerical energy meter that decreases over time, regardless of whether you take damage. 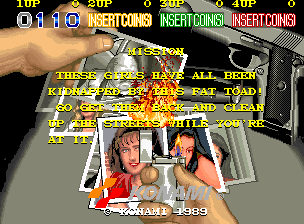 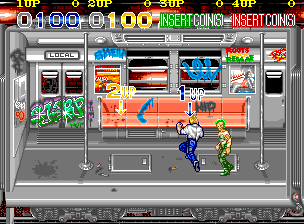 It’s a cheap way of stinging players for credits – a tacit admission that the game isn’t good enough to attract money on its own merits. In my humble opinion, it’s the single factor that keeps Gauntlet from being a classic – you just can’t have an epic 4-player dungeon run if you’re having to stop to pump coins into the machine. It’s not that the game can’t be hard – it just needs to dangle the possibility of rewarding extreme skill with extended play. If you’re a god at Pac-Man, that single credit should carry you all the way to the kill-screen. 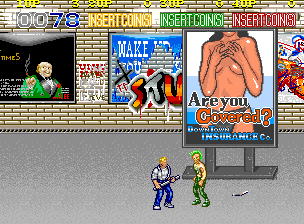 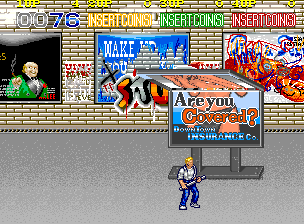 Tonally, Crime Fighters is a bizarre mish-mash. In some ways, it prefigures GTA with its brutal street violence against a backdrop of winking innuendo. But you can only get away with that if the game isn’t a seething jet of horse dysentery. The combat in Crime Fighters is awful – your dude can’t even string a three-punch combo together without the opponent interrupting it with one of their own. Kicks and punches are slow and short ranged. Weapons are nigh-useless.

And the shifts in tone aren’t just smutty jokes. One moment, you’re getting stabbed and stamped on in graffitied-up subway train, the next, you’re prancing about clutching your goolies, squashed flat by a falling sign, or splatted, boggle-eyed, against a wall. It’s full-on mood whiplash, like a Seinfeld slapbass lick in an episode of The Wire. 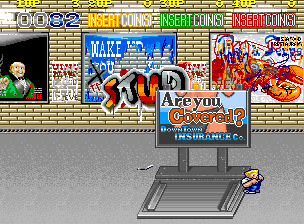 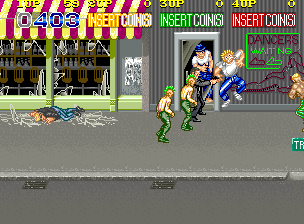 Fortunately – and utterly improbably – the sequel is brilliant. Released in 1991, Vendetta retains some of the cartoonish violence but ditches the po-face and – most importantly – isn’t a horrible trial to play. The controls are responsive. The game is… whisper it… fun. 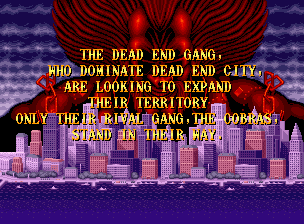 The Dead End Gang, bent on urban domination, decide to take out their rivals, the Cobras. It’s not clear why the Cobras represent a threat, given that they only consist of five members to the Dead End Gang’s several hundred, but hey. These are crazy street hoodlums. They know no logic, only the chaos of exquisitely-defined biceps and primary colour tees.

Instead of the standard attack and jump button combo for 3D sidescrolling beat em ups of this era, Vendetta goes for punch and kick. Hitting both together launches an aerial attack – which, in Sledge’s case, is a bizarre flying headbutt. This makes a refreshing change from the Capcom beat em ups standard ‘desperation move’, where you sacrifice a little energy to floor all your nearest opponents. 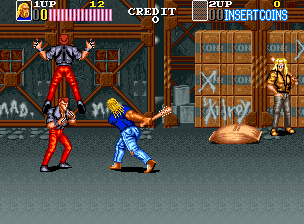 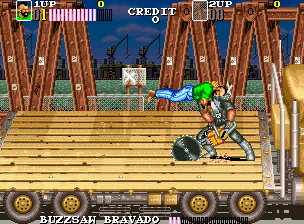 It’s a good game, you guys! The weapons help mix things up nicely. They range from spiked bats to sacks of cement that burst when you wallop your opponent, blinding and choking them with dust momentarily. There are shotguns and chains and breakable crates, and you can kick or elbow drop enemies while they’re laid out on the ground – indeed, this is an optimal strategy when you’re taking on the bosses. 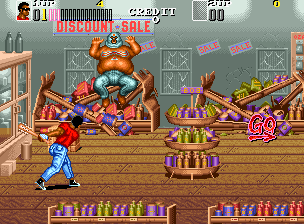 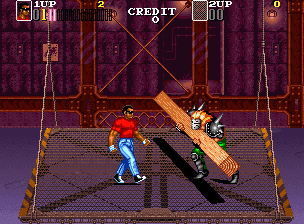 And the bosses! They’re not shit. It’s possible to defeat the first end of level boss, Buzzsaw Bravado, without taking a single hit, if you exercise a little caution and skill. This is exactly how it should be – talent and mastery of the game mechanics rewarded with optimal results, instead of iron-nerved strategising and incontinent button-mashing yielding the same outcome. 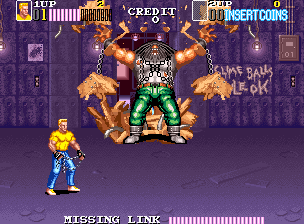 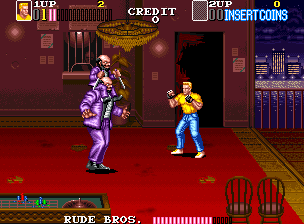 Sure, there are the standard palette-swapped goons most levels, but Vendetta mixes it up enough with smashable environments, sweet weapons, and hazards such as falling girders and cacti, that the game plays fresh right through to the big showdown against Faust at the end. You can see the incredible range in the colour palettes of these screenshots – the sheer attention to detail. It’s lightyears ahead of Crime Fighters. 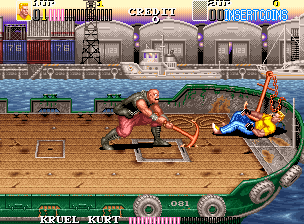 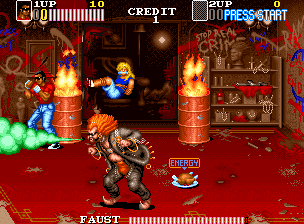 Well, go on then, I do have one criticism of this otherwise superior title. In the Asian release, when you reach the ‘downtown’ stage, the skeevy blade-wielding punks and bustiered dominatrixes are joined by mincing, rubber-clad gay stereotypes with limp wrists, who don’t directly hit you, but dry-hump you, draining your energy. If you get knocked down, they frot-fuck you on the ground. 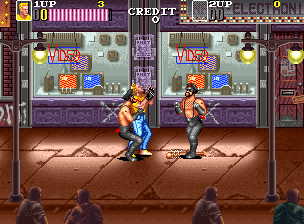 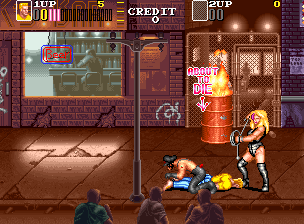 Wikipedia insists this was limited to the Asian release, but I distinctly remember these scenes from playing Vendetta in Weston-super-Mare, so I guess I was playing an illegal export. Another ‘feature’ removed from the US release is that, later in the game, rabid dogs rush you and hump you. I’m pretty sure both these changes were made because of the simulated sex, but it’s pretty gross that the game implicitly conflates rabid dogs with homosexual men. This isn’t me making a stretch for the sake of being provocative – if you’re out of range, the rubber-dressed guys will literally dry-hump a lamppost till the bulbs fall out and knock them unconscious. Vendetta came out while AIDS was still an object of fear, ignorance and bigotry in the mainstream media, and I don’t think the comparison here is accidental. I get that the game presents everyone as exaggerated and cartoony, but how a medium chooses to exaggerate different sections of society is revealing. This instance crosses the line into lazy defamation. It’s an expression of society’s unconscious (and sometimes not-so-unconscious) fears.

It’s fascinating how most beat em ups of this era have a section set, apparently, in a red light district. The dominatrix character goes right back to Renegade – understandable, really, since she’s already armed with a whip. Still, I find it very revealing of the attitudes of the time, how anything that deviates from vanilla, heterosexual sex – even something as innocent as homosexuality or bondage – gets associated with crime, violence, substance abuse, and moral degradation. On the other hand, it’s certainly true that many cities’ gay communities first started in ‘bad’ neighbourhoods, where people could meet without fear of bumping into their work colleagues.

Odd that these parts of history ignored or denied by the mainstream should crop up, via Japanese developers, in a video game. As a supposedly brainless artform, video games hold up a distorted mirror to our anxieties and secrets. For more on this, see my articles on Final Fight and the crack epidemic, and the spectre of socialism in Strider. 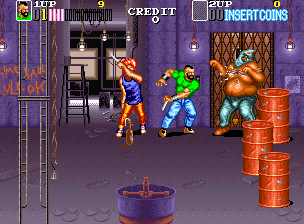 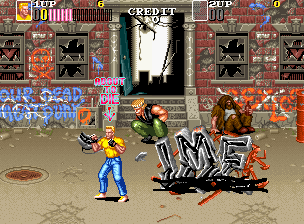 Once you beat the final boss, Faust, the game closes with an extra stage, where you take on all the bosses in pairs. Normally boss rushes feel like a necessary evil – no one really enjoys them, but it’s accepted as part of the genre. They’re like shelled prawns in a paella. You’re picking apart this hot, greasy prawn, trying to scoop out the good flesh without bringing a couple of legs with it, having a horrible time basically doing veterinary work at the dining table, but if the whole prawn wasn’t there, you’d be like: what a fucking gip, man – they peeled my prawns.

By adding the boss rush as a bonus, it feels optional, rather than this thing you have to slog through to reach your final opponent. And it’s actually well-balanced and fun! The bosses have reduced life bars, and there are crates containing food and weapons, so skilled players are in with a shot. All in all, if you ignore the crazy homophobia, this is a pretty sweet game! 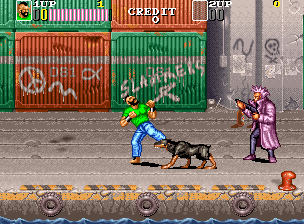 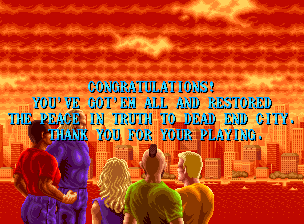 If you want to read more of my history of beat em ups, click here.