So what’s the best 2D sidescrolling beat em up ever? Perhaps you thought this was a subject you could sneak through life not having an opinion on! Wrongo!

The best 2D sidescrolling beat em up of all time is the arcade version of Splatterhouse.

I first encountered this game amongst the smoky black cabinets of Mr B’s Amusements, an arcade in Weston-super-Mare. The arcade machines formed corridors, and on the far right of the building, leading towards the netting and ballpools of the hideous adventure playground – God, I can picture the exact configuration of cabinets – were three arcade machines. They’re on my left. I’m shorter in this memory – the joysticks are just below eye level. I can hear shrieking children, smell the musk of dead cigarettes crushed in oval black ashtrays in each machine beside the coin slot. Each cabinet is a generic shell, with two joysticks and three circular buttons for each joystick. As I walk towards the screams, the games to my left are, in order, King Of Boxer, Double Dragon and Splatterhouse. The year is 1989. I’m 8.

At 8, I’ve never seen a horror movie but, like any child of the 80s, I’ve absorbed fragments of the genre through cultural osmosis – the hockey mask, the bladed talons, the glowering eye reflected in the flat of a butcher’s knife. The cardinal rule of horror is: don’t show the monster. Or, at least, hold back for as long as possible. Abominations thrive in the dark recesses of the imagination.

Splatterhouse is an ersatz mash-up of just about every horror cliché going. It is also terrifying.

May I request, before you go any further, you open the following link and let the mp3 play as you continue reading? It’s part of the in-game music from Splatterhouse, and its confusing mix of sour, microtonal wrongness and kitschy chiptune will set the mood beautifully.

Splatterhouse – I Will Find You

Two lovers, Rick and Jennifer, get caught in a thunderstorm, and take refuge inside the sinister West Mansion. They are immediately set upon by demons, who kidnap Jennifer and leave Rick for dead. However, a mysterious mask attaches itself to Rick’s face and revives him, granting him monstrous strength. Rick sets off into the mansion, determined to rescue Jennifer and defeat the terrors within. 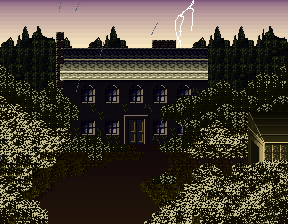 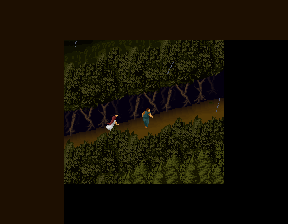 I’ve written about Splatterhouse before, and I don’t mind covering it again, because it’s just great. It takes the strange grammar of the beat em up – walk from left to right, punching things, and trying not to get punched – and wrests emotional reactions from you. It’s scary and weird. 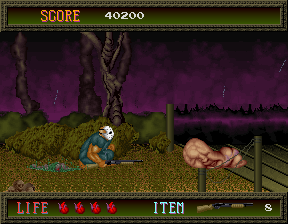 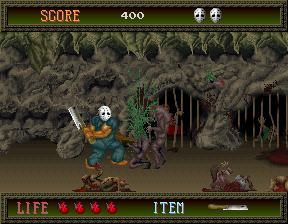 Hideous, hyper-encephalic foetuses crawl through the woods, screaming silently, vomiting gobbets of green sludge. Water forms itself into bearded swampmen who die with an echoing moan as you use a 2×4 to slam them into the wall. 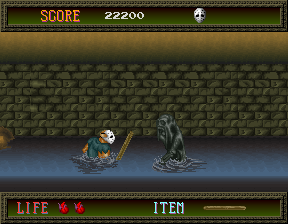 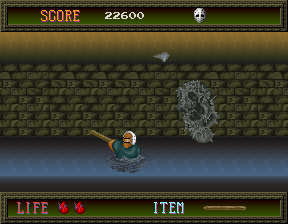 Look, I admit – I’m a total baby when it comes to horror movies. Some people find them cathartic – personally, I find them horrendous ordeals. I can’t switch off or disengage. It doesn’t matter if they’re totally crap. I found the Paris Hilton remake of House Of Wax scary, for goshsakes.

Splatterhouse is fun and colourful and satisfying. Enemies thud and splat and groan when you belt them. You can pick up planks and cleavers and axes and rocks and harpoons and even shotguns. Oh my, the shotguns are so much fun. 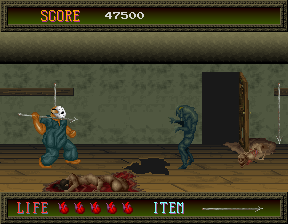 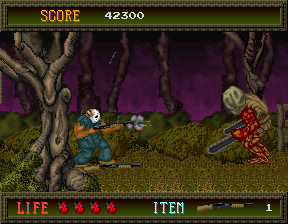 You can see how all this would be a lot to take for a boy of 8. The graphics such a jaw-dropping leap from a couple of years before. Just look at the detail on that gnarled tree in the foreground, as rain hammers down and a ghostly purple fog glows in the distance.

That’s not just a lazy background, either – all through the game, if you move too slowly, an eerie purple gas begins creeping onto the screen, coruscating with sparks. Even those of you without a cursory literacy in video game tropes can probably guess that touching this gas equals Bad News. Eek! Here it comes again! Run, Rick! Run! 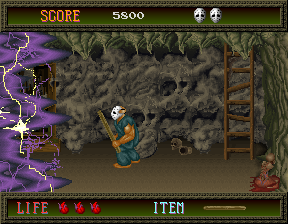 I remember standing in the arcade, solemnly watching a dude who got all the way to the part where you find Jennifer. Instead of a romantic reunion, she transforms into a huge slathering beast with grey flesh hanging off it in rinds, and retractable blood-red talons. She’s pretty damn badass, but keeps transforming back into her old self, just long enough to remind you that you’re killing the love of your life. 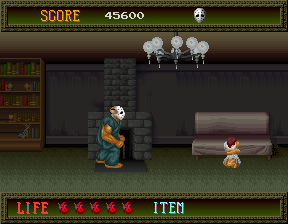 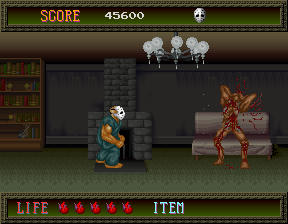 I’m not claiming that Splatterhouse courageously turns the damsel-in-distress trope on its head and strikes an early blow for feminism, but it’s a cool twist to have the supposedly fragile, passive object of your quest metamorphose into one of the game’s most terrifying bosses. The secret, incidentally, is catching her with a punch, mid-leap. Back in 1989, the guy I watched in the arcade got creamed. 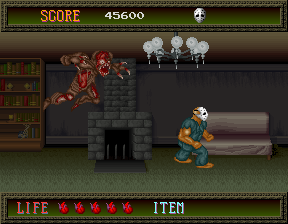 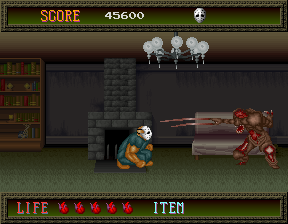 After the fight, Jennifer dies in Rick’s arms. The last two stages see you plunging into the heart of the West Mansion, literally, fighting your way through hordes of shivering pale monster foetuses to the pounding heart in the basement. After the punishing difficulty levels up till now, this is a surprisingly easy stage. Whack it enough times, and the great beastly organ explodes, spewing gore. 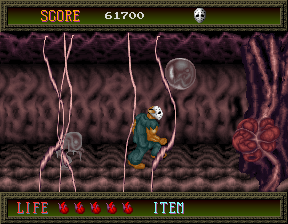 Hey, you might fancy changing up the soundtrack by now. Here’s another – equally discomfiting – tune, from later in the game.

The final stage sees Rick fleeing from the burning mansion, dodging flaming monsters and logs. Eventually, you reach a grave, where the last twist plays out – the evil energies in the mask turn on you, summoning a grotesque, half-melted giant affectionately known by fans as ‘Captain Mozzarella’. He’s not very tough. Beat him, and the mask explodes. Rick returns to normal, and the credits roll as he staggers away from the blazing ruins. 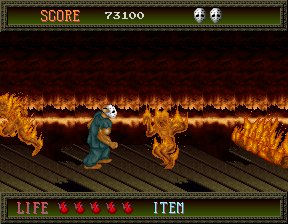 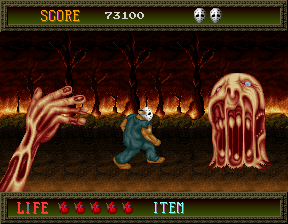 Splatterhouse is a great, great game. Controls are responsive, gameplay is tough but fun, and it’s one of the most impressive and atmospheric titles of the 80s. It takes the beat em up genre on an original, startling detour, exchanging the familiar caricatures of crack-raddled late 80s New York for a freakish, nonsensical remix of every horror movie to date. It shouldn’t work, for so many reasons – the main sprite is too big, the range of influences incoherently wide: Jason Vorhees harpooning aliens while poltergeists hurl furniture and helldogs with exposed ribs howl at the moon (if another enemy hurls caustic vomit at you, the helldog will pause to lick up the puke, allowing you to kill it while it’s distracted).

The attention to detail here is staggering. There’s none of the stock palette-swapped grunts coming at you again and again, no final levels padded out with a tedious and unfair boss rush. Each stage offers new baddies, new horrors.

The soundtrack, as I’ve said, is great. I think some of the pieces might be written using microtonal or alternative scales, like the 13 note Bohlen-Pierce scale – the result is tracks that don’t sound out of tune, exactly, because they’re obeying mathematical rules, but they go against everything our Western ears have been trained to enjoy. It’s like the uncanny valley of audio. They sound wrong. Here’s a track in the Bohlen-Pierce for you to creep out to (music starts about 20 secs in):

Sadly, most of the sequels to Splatterhouse weren’t very good. I haven’t played the chibi-style NES parody – it looks similar to Mighty Final Fight, which is actually great. I plan to check it out and report back, but it’s not strictly relevant to our history of beat-em-ups, since it transitions into mainly platforming action.

And that’s our journey through 2D sidescrolling beat em ups complete. It’s funny – as I immerse myself in these worlds of endless pummelling, I’m beginning to spot connections between games, little ways in which they speak to one another, an overarching narrative. How strange that human beings should crawl out of the primordial ooze, develop opposable thumbs, then, one day, dig minerals out of the earth in order to make tiny, freakish facsimiles of the world, weirdly distorted, where we can control stronger versions of ourselves, exterminating social outcasts and genetic misfits.

Click the ‘beat em ups’ tag to recap my entries so far. Hope you enjoy ’em. Oh, and we’re not done yet. Not by a long chalk.