We started our journey through the history of beat em ups way back in April – we’re three months deep already. If you missed previous posts they’re all available to browse. Slowly, slowly, we’re building a bluffer’s guide to the hallowed video game genre known as the beat em up. If you enjoy these posts, why not drop a link on Facebook and Twitter to let your game-loving (or just game-curious) buddies know about them? This is culture, kiddies. Stick with me. We’re going places.

Last week, we looked at 2D sidescroller Kicker, a beat em up/platformer hybrid. This week, we’re looking at another jump n’ thump, the bizarre My Hero.

The game opens with a punk dude kidnapping your girlfriend. I did some detailed analysis of this incident in my (very) old bit on video game partner abductions. Check it out if you want to learn more:

It’s your job to punch and flying kick your way through three – count ’em – levels of cartoonish goons, facing a boss fight at the end of each. In the stages proper, your man is brittle as a meringue. Contact with anything hostile immediately kills him. Yes, all bad guys can also be dispatched with one strike, but since there are 5-8 of them to 1 of you at any given moment, this makes the game fucking impossible.

Seriously. Watch the gameplay video. I had to do it with infinite lives because the game is tough as balls, but even so, I die and die and die with crazy regularity. That’s not a game. It’s a Chinese Buddhist hell.

The levels are gangster, ninja and Planet Of The Apes themed, respectively. When you reach the boss at the end of the stage – always, unaccountably, on a sunset beach – suddenly you get an energy gauge, and it’s up to you to fill the boss’s bar with successful hits before he fills yours. These vs battles, while samey, are quite fun. They remind me of rudimentary Yie Ar Kung Fu fights, and prefigure the PvP format that would come to dominate the genre with the release of Streetfighter II.

They’re also piss-easy. Watch the video again. (well, just watch it once, but remember what happens) This is my first playthrough, and I beat the boss on my first attempt every time. Compare that to my median lifespan in the levels themselves, which comes in at around 3 seconds, and you’ll see that My Hero suffers from some fundamental balance issues.

The controls are fairly responsive but the collision detection – while adequate for the platformy bits that come late in each level – is bloody awful as soon as you get into a melee. Twee surreal graphics and the camply farcical music soften the blow a little, but mainly this game had me yelling like John MacEnroe in disbelief and anguish. A year later, My Hero got a release on the Sega Master System. Aside from some background details, it doesn’t lose much graphically, and the chipper, wacky soundtrack makes it over more or less intact. I’m not sure if it’s easier, exactly – to be honest I can’t get halfway through the first level – but it feels fairer. The Master System can’t handle as many sprites on the screen so you’re not overwhelmed like on the arcade. The collision detection is still on the shaky side and projectiles flicker as they travel through enemy sprites, but, y’know, overall it’s okay. I don’t know why but I feel rather fond of it.

Aside from the less detailed backgrounds, bad guys no longer turn into angels. This may be a graphical limitation, but it may also be a change for the US market. A lot of console games had religious iconography removed – such as the crosses that appear on the chests of the angels in the arcade version – for fear of rousing the Christian Right into further moral panics. In the 80s, video games were emerging as the new Terrifying Foreign Threat That Will Eat Your Children’s Minds.

I also like how, right at the beginning, when your girlfriend gets abducted, the punk actually thumps you. In the arcade, he just runs past and whisks her away, while you stand there, gobsmacked. At least this time you have an excuse! 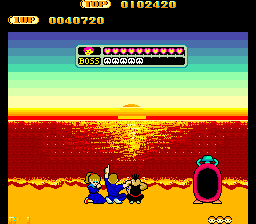 I find hating My Hero weirdly hard. For all its clunky gameplay, insulting shortness, and anuerysm-inducing difficulty spikes, there’s something charming about it. I like how the titular hero kneels with each defeated boss on the beach, pointing to the sunset while the fallen villain sobs and your girlfriend kneels in prayer beside you. I like how, when you wallop them, bad guys whiz off the screen as little angels (and even the dogs turn into little red collars with wings). I like how you can rescue a pink version of yourself, tied up, and how your doppelganger then follows you through the level, ineffectually kicking at enemies until he inevitably gets hit by a projectile and dies. I like the spacesuited apes that drop out the sky.

For ages, I thought the Stage 1 music for My Hero was identical to the music from weird Pac-Man-esque nonsense satire I’m Sorry. Having played them side-by-side to check, it turns out the songs are similar, but distinct. Then I realised the two games were created by the same company, Coreland, in the same year, 1985. And it turns out that ex-Japanese Prime Minister, Kakuei Tanaka, (the main character in I’m Sorry) makes a cameo in My Hero – if you manage to escort your pink hostage-doppelganger all the way to the end of the level (a nigh-on impossible task, although someone manages it in this mindblowing video), Tanaka appears, waving his trademark fans, to celebrate your massive and richly-deserved bonus. (I wrote a piece about Kakuei Tanaka and the background to I’m Sorry, which you can read on the Mercy website)

It’s not much of a beat em up, though. Next week, I think we need to take things up a notch. Let’s get some muscle, some sweat, some ooh yeah. Let’s dial down the platforming and dial up the punching. I think we’re ready to take 2D sidescrolling beat em ups to the next level.

Want to keep updated with what I’m up to, where? Sign up to my monthly newsletter please!