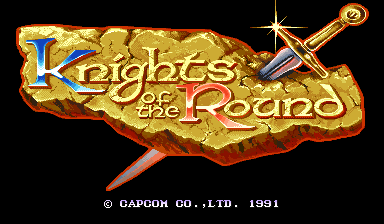 Hey faithful companions. It’s another in my series of posts plodding through the history of the beat em up. As I wrote in December, they’re probably going to remain less than weekly as writing commitments pile up, but I will see it through to the end. Just want to make sure I’m writing them for enjoyment and not because of some imagined arbitrary deadline, otherwise the misery will just seep out into the post and all you’ll be reading is EWWW GOD WHO CARES PLEASE SOMEBODY KILL ME 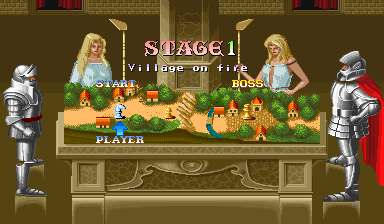 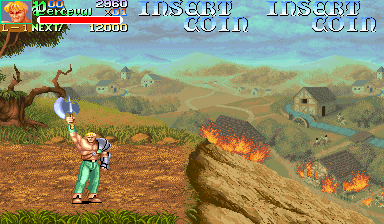 Knights Of The Round is Capcom’s super-loose interpretation of the Arthurian legends, transposed into the side-scrolling beat em up genre. Some might argue that it doesn’t qualify as a beat em up at all, what with the presence of swords and axes and conspicuously few punches to the fizzog. But I say: fuck you. The hack n’ slash huddles happily under the great beat em up umbrella as a recognised sub-genre. 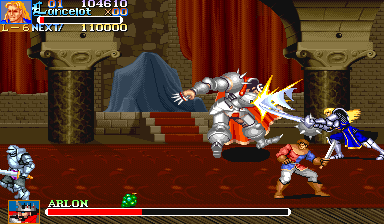 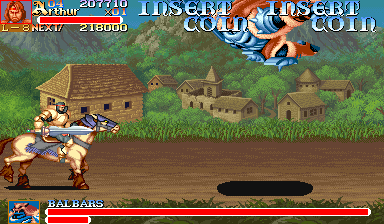 As the titular Knights Of The Round – fast fencer-type Lancelot, burly axe-grunt Perceval, and ludicrously over-powered all-rounder Arthur – you have to head off to… well, actually your quest is surprisingly unclear. As far as I can tell, first of all the three knights respond to an attack on a village, only to discover that the perpetrators are goons of evil spiked-knuckle-duster-wielding thug-king Arlon, and so you set out to storm his castle and put him in his place. 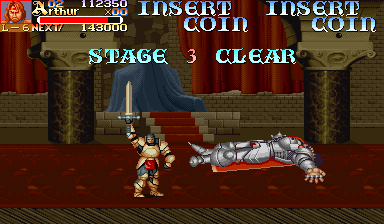 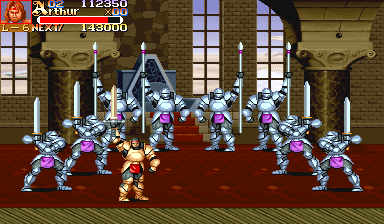 Arlon slain, there’s a jolly interlude at some kind of jousting tournament, where you and your men play a friendly game of capture the flag. But then – gasp! 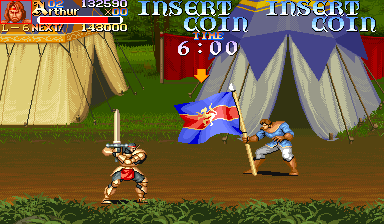 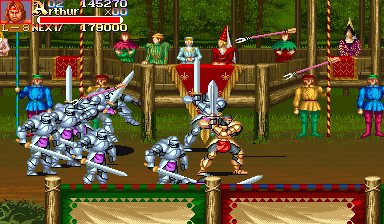 Dastardly foreign assailants start showering your men with weird double-pronged arrows! What can you do but give chase, apparently via Scandanavia, through a magical tunnel all the way to Japan? 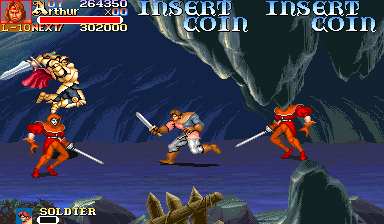 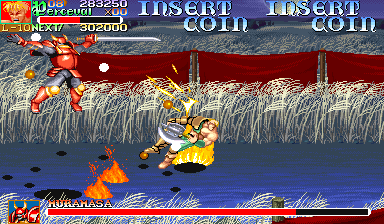 Then you fight a golden king called Garibaldi, (just a palette-swapped version of Arlon) and recover the holy grail. Maybe that was your goal all along? Maybe Japan was just a side-quest? Who knows, my friends. These are the knights of the goddamn Round Table. They don’t give a shit about logic. They’re wealthy aristocrats with a religious mania. 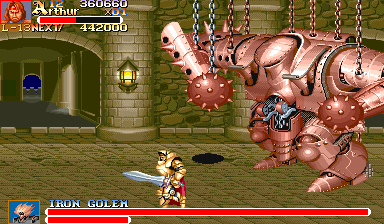 Knights of the Round came out right in the sweet spot of Capcom’s dominance of the 3D side-scroller beat em up market. It appears between Final Fight and Dinosaurs & Cadillacs so even if that was all you knew about it, you’d be pretty sure it was going to be sweeeeet. 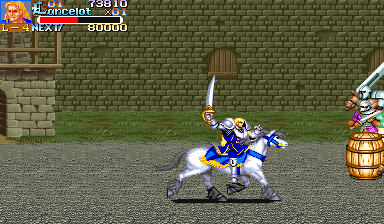 Um, it is semi-sweet. At first glance, it’s level-up system seems like a nice twist on the normal plod-plod-punch action of side-scrollers. Collect treasure to boost your score and, when you pass certain thresholds, your character will level up, gaining snazzy new armour, a bigger weapon, and – in the case of Perceval – a shorn head and massive beard. 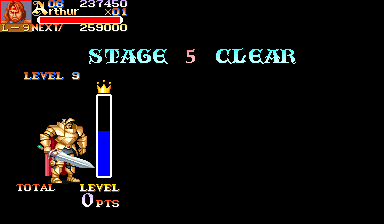 The problem is, apart from restoring your energy mid-level, the level-up mechanic doesn’t seem to have any noticeable effect on gameplay. It doesn’t feel like you’re clobbering bad guys any faster. You don’t learn any new moves. It’s mostly aesthetic. 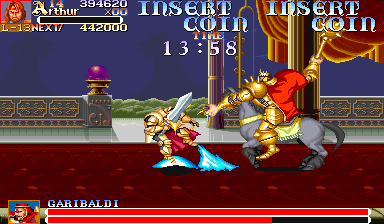 The boss battles feel samey and frustrating. 3D side scrollers never really figured out the ‘lateral plane problem’ – that is, the tactic of approaching an enemy by walking slightly above or slightly below them on the screen, thus rendering your character invulnerable to their attacks, then sidestepping in at the last minute to deliver a combo, then dodging aside again, letting them counterattack, before stepping in again, mash-mash-mash, yawn-yawn-yaaaawn.

Dynamite Dux tried to get around this by allowing 8-way attacks, but this just led to awkward joystick-wrangling trying to get into position, and moments where your sprite is completely obscured by the boss, and you can’t tell if you’re getting creamed. 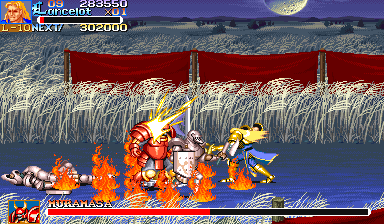 Knights Of The Round tries to solve the same problem by having every boss dude after Level 1’s Scorn attack with an area-effect blast (either fire, magic orbs, or a corona of blue energy) that goes all the way round them. This stops you dipping in from the side, but makes beating them without taking a pasting fucking impossible. You’re not given any new tools to counterbalance this tactic, so it’s just a case of running in, spamming the attack button, dying, and pumping in more credits.

Battles of attrition are rarely fun, especially in beat em ups. This game is worse than I remember (we definitely got to Arlon in the arcade, but I think he rinsed us for the last of our 10ps). Fair enough – Golden Axe was better than I remembered, so I’m happy with the swap. Maybe check out the SNES version, which was better balanced for a home system.

Check out my previous posts about the history of beat em ups, and I’ll be back soon with another title, as we explore the lost genre of 3D side scrollers. 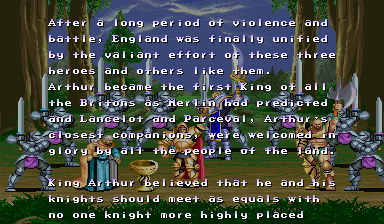 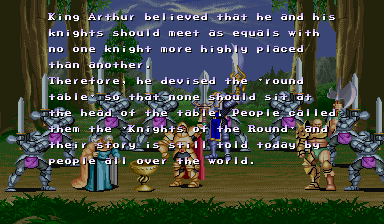