It’s been a long road since we started our history of beat em ups way back in May, but I think we might just about be hitting the halfway mark. Cor!

Over the coming weeks, we’ll be looking at all the major 3D sidescrollers before moving onto player v player beat em ups. That means we’ll be hitting a rich seam of quality, from Cadillacs & Dinosaurs and The Punisher to Streets Of Rage and Turtles In Time. We’ve already covered Final Fight and Golden Axe, but there’s plenty more fun to be had (including the Golden Axe sequels, which you’re probably less familiar with – one is pretty good, one is a big steaming nappy o’ sadness). Basically I’m going to rapturously reunite you with some old friends and hook you up with some sweet new buddies.

But not every sidescrolling 3D beat em up is good, noble reader! Rather than waste a fortnight lamenting the wretched tedium of both these games I thought I’d combine them into one big shamepost. Of course, I could’ve just ignored ’em, but I’m a completist at heart, and although this history of brawling simulations will never be exhaustive, out of sheer bloodymindedness I’m committed to documenting the stinkers alongside the stonkers. Welcome To The Fantasy Zone is pretty niche as it is – I might as well go all the way.

In Karate Blazers and D. D. Crew you’ll recognise elements of previous beat em ups we’ve covered. Karate Blazers (video above) borrows heavily from Crime Fighters and Vendetta, even ‘borrowing’ Sledge’s bizarre flying headbutt move. The gameplay starts off nice and pacy, and each of the four characters gets a smart bomb desperation move, which ranges from hurling a fireball to simply flattening everyone on the screen.

Sadly, the game suffers from being a heap of shit. This manifests in samey levels, bad guys who act more or less indentically, and too many enemies on screen at once, turning fights into joyless slogfests. They don’t even bother palette-swapping your enemies between levels, so you’ll find yourself pummeling the same five goons all the way to the end of the game. Everything about it screams rushed production, corners cut, and an utter lack of love – in stark contrast to the flawed but inventive Combatribes that we looked at last week. 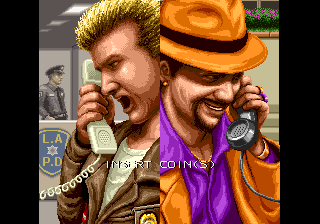 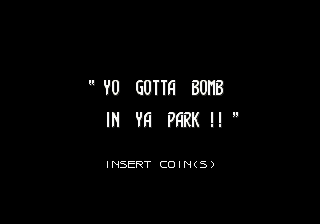 D. D. Crew is a similar story. There’s a token effort at stringing together a sort of filmic narrative, but it’s laughably incomprehensible – I can only think the game was rushed out to vaguely crib off some Hollywood movie that they couldn’t get the license for, but the plot is such a mangled, surreal snarl of Engrish that the source material has been well-and-truly disguised. 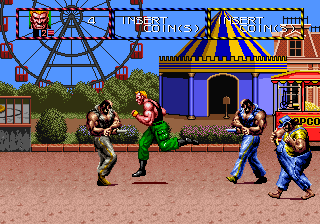 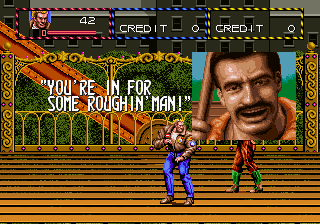 It’s sad, because there are some really inspired attempts at setting – a fight that starts inside a cable car, the city scrolling past beneath you, and escalates up onto the cable car roof. After scrapping with Bruce-Lee-but-not dude, you leap to safety just before the cable car smashes into a building. 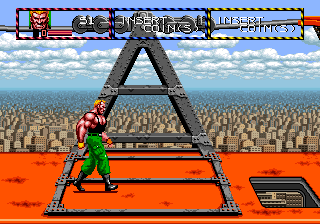 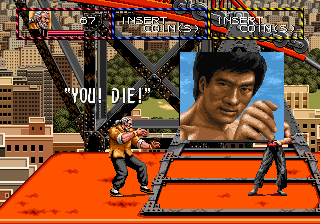 All very exciting, all nigh-unplayably crap, with dire, clunky controls, and a cast of five opponents who appear on every damn level. You’re simply not given the requisite moves to deal with the endless grinding waves of enemies the game throws at you. There’s no transcendence in it.

Think of playing Robotron: 2084, or Tetris, or the Fludd-free levels on Super Mario Sunshine – that feeling close to ecstasy when you get in the zone and your hand-eye coordination bypasses your conscious mind; the glory of kickflipping off a wall and corkscrewing over a bottomless void to land thunk on the opposing bank, the multicoloured blocks sorting themselves into stacks as fast as they can appear, the hail of flourescent bullets blooming in a 360 degree spread from your avatar as you dart between Grunts to rescue the last human family.

Truly amazing games augment and transform our locus of control. Through constraints, intuitive controls and comprehensible ludic grammar they grant human beings the illusion of mastery. It’s a wonderful illusion, in my opinion. 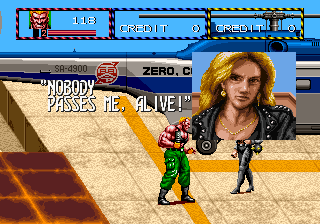 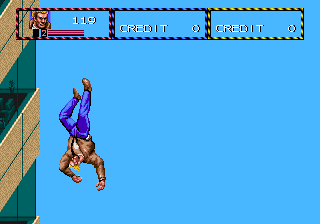 I mean, in a way, D. D. Crew is a huge success, insofar as repeated appearances of grinning four-frame-animation dagger guy filled me with a sociopathic rage that genuinely made me want to punch a face. But by every metric we have learned to judge human entertainment with, it is a colossal, plunging failure.

If you’re not up to speed with my history of beat em ups, now might be a good time to dig into the archive. See you next week!