Final Fight is the biggie, really. Even if you take Streetfighter II as the moment where beat em ups sloughed off their gills and waddled pugnaciously onto the land, spoiling for a fight, a bunch of the groundwork got done not in the original Streetfighter but in Final Fight.

If you’ve never played it before, watch the gameplay video above. Seriously. I made a video. Don’t cry and say you don’t understand video games. Go get some learnin’. I’ll wait.

You didn’t go look because literally no human has not played Final Fight. If you’re thinking ‘hold on a tick, I haven’t played it!’ sorry, fucko, playing Final Fight is a mandatory component of the human condition so I guess somebody isn’t a real person. Final Fight is awesome.

Here is the plot: ‘sometime in the mid-nineties’, new mayor of Metro City, Mike Haggar, is sitting in his office when he receives a phone call. Who could it be? Northern Uproar? A ‘lad mag’? No, it’s a whooping jaundiced reprobate called Damnd. He wants Mayor Haggar to capitulate to the demands of criminal mega-gang Mad Gear in exchange for life of Haggar’s daughter, Jessica, and a monthly cash bonus. Damnd if you do, Damnd if you… oh god I think I just threw up in my mouth.

Haggar is furious! He turns on the TV – somehow Mad Gear is broadcasting on every station! You’d think that offering to bribe a public official live on television would defeat the purpose of kidnapping his daughter in the first place, but the members of Mad Gear don’t care! They’re too hyped up on terrifying modern street drugs with names like Krush and Necro to act as rational actors in a negotiation! Wahoo!

So what does Mayor Haggar do? Pretend to agree to the deal, wait till the gang delivers Jessica back safely, then go after them with the full might of State and Federal enforcement agencies? Reflect on how top-down neglect, racism, unemployment and the absence of compassionate state intervention has allowed crack dealers to exploit America’s urban poor?

I mean, surely he isn’t going to strip down to the waist, call on Jessica’s boyfriend Cody, at the gym, and his mate Guy, then march into his city’s most deprived areas with the intention of fighting every single member of the Mad Gear gang hand-to-hand until he rescues his daughter? Surely that would provoke them into killing her?

Seriously, if Mike Haggar ever met Boris Johnson he would immediately suplex him into the Thames. He could never stomach a guy with a Russian first name and a surname that means penis.

Many of the elements of Final Fight appear in Double Dragon (which we’re going to circle back towards and deal with in a few weeks) but Final Fight does them all so much better. The levels look incredible – from the construction site lift on Rolento’s stage to the fight in the underground arena when you take on Sodom.

And the character design! Cody and Guy are all right, but Haggar’s suite of moves is like nothing that had come before: suplexes, pile drivers, drop kicks, body presses, spinning clotheslines. Cody and Guy eventually make it into the Streetfighter series as playable characters (as do bad guys Rolento, Sodom and wrestler Andore, renamed Hugo to avoid copyright problems with the late Andre the Giant, on whom he was modelled) and become well-rounded, properly-differentiated additions. Haggar never made it because, on the release of Streetfighter II, his entire repertoire was stolen by Zangief. I mean, seriously – who plays as Zangief? (late in the series he becomes a viable character, but I digress) 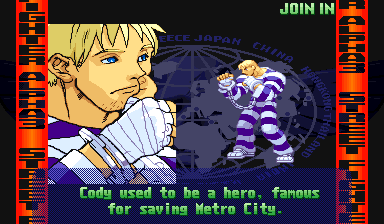 Cody’s continuing story is a bit sad – after the ending of Final Fight (which you can watch on the video above) he becomes a listless wanderer, trying to recapture the thrill of that first battle. He never recovers, gets tangled up in brawls and goes to prison, and by Streetfighter 4 he’s broken out to hunt for someone to alleviate his boredom. He’s a wicked character to play as – he even gets a knife he can pick up and get stabby with.

Apparently Robin Williams named his son after Cody in Final Fight. And his daughter is called Zelda. Basically if that’s the only parenting he ever did I’d still happily nominate him as: the Awesomest Dad.

I talked a bit last week about the right-wing fantasy of the vigilante descending into the slums to purge the bad elements. In Final Fight we’re shown how corruption runs right through the city, from the urban wastes, to corrupt police officers, to construction projects, and right up the glittering storeys of crossbow-wielding crime boss Belger’s skyscraper (the game lets us know he’s evil by making him unattractive and putting him in a wheelchair). It’s a beguiling fantasy – that social strife is traceable to a single bad apple, that corruption isn’t systematic, that, if the evildoers are brought to justice, existing power structures will naturally create prosperity, justice and freedom.

And within the cartoonish world of a video game, it’s fucking fun.

Final Fight spawned many sequels, some official, some spiritual. The official ones were, on the whole, disappointing, but I want to look at one you probably haven’t heard of before wheeling back round to tend to some unfinished business in the world of early side-scrolling beat em ups. Yes, we’ll get onto Cadillacs & Dinosaurs / Captain Commando / The Punisher / Alien Vs Predator / The Simpsons eventually. Don’t wet your knickers.

In the meantime, I’d love to hear your tips for classic 8-bit beat em ups. Anything on the NES or Master System, or – dare I hope – some lost classic on the magical ZX Spectrum / Amstrad / Commodore 64 triumvirate. Drop a comment in the box below. I need your help!