I believe it was the late, great Friedrich Nietzsche who said ‘Double Dragon is a rope, tied between Renegade and Final Fight… a rope over an abyss’. And wouldn’t you know it, the big moustachioed sociopath was right!

In Double Dragon, the player takes control of martial artist Billy Lee, fighting his way through the mean streets, into the peaceful bucolic forest, and on into the ravine base of the Black Warriors gang, to rescue his sweetheart, Marian. Double Dragon was one of the first side-scrolling beat em ups to offer a simultaneous two-player option, where player two fights as Billy’s twin brother Jimmy. It might even be the first – I can’t for the life of me think of an earlier example.

Double Dragon is a spiritual successor to Renegade, (which we discussed previously) and adopts many of the same gameplay mechanics: bad guys attempt to surround you; some will grab your arms while another wallops you; it’s possible to knock opponents off ledges or down holes, killing them instantly (but you’ll suffer the same fate if you’re not careful!). In two-player mode, you can get behind enemies and hold their arms back while your brother pummels them.

The game essentially exists as one continuous stage, with boss battles splitting it into four distinct ‘missions’. The level design is ambitious for the time and genre – one boss fights you near a conveyor belt. If you can knock him onto it, it’s possible to kill him in a single hit, as the conveyor belt drags him into an incinerator. There are pits to knock enemies down, a broken bridge to vault over, and, in the final, neo-Egyptian stage inside the Black Warriors’ base, Anubis statues attack you with spears, sections of wall fly out and hit you, and huge spiked pits wait for you to clumsily stumble into them. 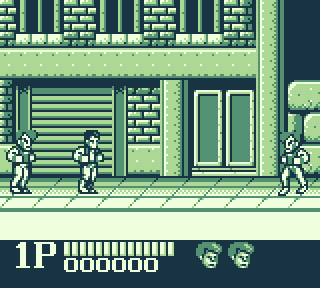 Double Dragon is certainly more fun than I remember. As a kid, I played the Gameboy version a bit, and enjoyed it, but it never stood out as a classic. Replaying it, the game feels lightyears ahead of Renegade, even though the gameplay is superficially similar. The introduction of weapons, in the form of whips, baseball bats, crates, barrels, boulders and sticks of dynamite, really helps to mix up the action, and the greater complexity in level design – while at times frustrating – does help distract from the tiny suite of palette-swapped enemies you fight throughout the game. If you manage to get to the end in two player mode, once the boss of the Black Warriors has been defeated, the brothers Lee must battle one another for the affections of Marian, a ploy more famously repeated in Streets Of Rage a few years later.

Also, can we just take a moment to appreciate how spectacularly good the Double Dragon music is? Listen to it in the video I’ve posted at the top here. So funky.

There are some lovely little moments to watch out for, too. Watch the video to see the scene where you face the first boss – there’s a sweet chubby kitty just sitting on the dustbin in the background, watching all unconcerned. Bwaaaaaaw. Bless.

Double Dragon spawned a couple of sequels, and it’s certainly fondly remembered, although rarely played these days. I was going to leave the sequels as a footnote to this article, but I’d actually like to explore them in a bit more detail, so perhaps I’ll give ’em their own post. If I’m going to spend all this time churning out a history of beat em ups, I might as well do it to a basic level of competency.

In the meantime, here’s an old clip of my doing a bit on stage about girlfriend kidnappings in video games. It was my first time performing the material, so my delivery isn’t great, but my Double Dragon II bit remains possibly my favourite joke I’ve ever written.

You can check out the rest of my posts on the history of beat em ups here.