And so we come to the last game in the Double Dragon trilogy. Other titles went on to bear the brand, granted, but this was the one that emphatically killed Double Dragon as a viable top-flight franchise.

When, a few weeks ago, I committed to reviewing Double Dragon 3: The Rosetta Stone, I remembered it as a disappointing conclusion to the groundbreaking DD series – a game that had bitten off more than it could chew. I remembered seeing it in the arcade – the exciting combination moves, like whirlwind kicks, the additional characters, the in-game shops where you could use credits to buy weapons, boost your energy or power, or unlock new characters. I knew that, between the release of DD2 and DD3, Final Fight had come out, completely transforming the side-scrolling beat em up market. My working assumption was that DD3 was a victim of history, a well-meaning effort made obsolete by the relentless march of progress.

How wrong I was.

In DD3, crisply-bouffanted muscle twins Jimmy and Billy Lee emerge from two years of training, looking for a new challenge. Obliging crone Hiruko tells them of the legend of the Rosetta Stones, which are a bit like the Rosetta Stone except instead of unlocking a millennia-old linguistic puzzle they let you travel to Egypt to face ‘the world’s strongest enemy’. Brilliant, right?

There then ensues one of the worst games I have ever played.

Seriously, DD3 takes everything its predecessors did right and flings it out the window. A variety of cool weapons usable by you and your opponents? Gone. Now weapons are only available by putting actual human money into the arcade machine and investing a credit in the shop that opens each level. And they’re not even good weapons! The crappy katana you buy in Japan actually makes the game harder – you can’t performing flying kicks while you’re holding it, only slash with the slow, ineffectual strokes of an aging gardener dead-heading the hollyhocks.

Context-dependent left-right attacks? Gone. DD3 takes the refinement of DD2 that gave you a chance to fight your way out of a sticky situation when surrounded, and replaces it with the old, clumsy, punch, kick, jump system. Cue a lot of getting wedged between two sprites and walloped unto death.

Smooth, bold graphics? Gone. Billy and Jimmy seem to have about five frames of animation. Sprites don’t walk across the playing field so much as jerkily brachiate between set points like little robotic chimpanzees. Collision detection is fudged to the point that a spear slicing through the air a clear two feet from your head sends you crashing to the floor. The final boss, a rictus-faced Cleopatra, is barely animated at all! She slides around the room, motionless, a blue gown flickering around her, her arms against popping into the ‘raised’ position whenever she delivers her – incredibly annoying and cheap – remote force choke move that takes a third of your energy.

Intuitive, responsive controls? Gone. Playing DD3 feels less like a beat em up, more like a God sim where your only mode of interface is yelling instructions to your cloth-eared followers, begging them not to fuck up again. Moves performed on the joystick and buttons are only tangentially related to what happens on-screen. It’s as if you’re inputting a series of suggestions, which the characters may or may not follow. 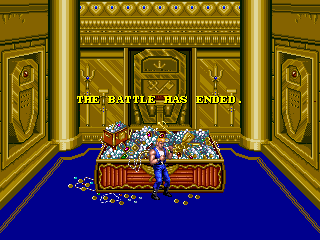 DD3 is bum. It’s worse than that. It’s omni-bum. Imagine waking up inside a huge sphere, with no memory of how you got there. As you approach the wall, you see it appears to be textured with little pimples, like foam sound baffles. The floor beneath you is the same. Stooping, you reach out to touch the cobbled surface.

They’re not pimples. They’re tiny buttocks. The entire interior of the sphere is covered in plump, tessellating jacksies. Your whole environment is bum. You are trapped in a world of bum.

That is how you would feel if you had played this game. I hated it, and I hate the people who made it. I watched the ending credits just so I could compose a kill list. It is the worst beat em up I have ever played, and one of the worst games.

Most unforgivable of all, it smothered a promising franchise in the crib. Imagine an early 90s Double Dragon title on a par with Cadillacs & Dinosaurs, or Punisher. It could have been so beautiful, but instead we got this insulting rush-job that looks and plays like it was knocked together out of Duplo by gibbons. It’s not just bad. It’s worse than going to work.

I think we’ve had just about enough of the brothers Lee for now. I might wheel back later to cover bizarre NES/SNES/Megadrive crossover Battletoads & Double Dragon, but I’m desperate to find something to wash the abundant taste of arse out my mouth. No one said this quest was going to be easy.

See you next Tuesday (arf) as we continue our journey through the history of beat em ups.