Coming out a year after Double Dragon exploded into arcades and revolutionised beat em ups with true side-scrolling, 3D playing field action, Double Dragon 2: The Revenge is both a rush job, cynically capitalising on its prequel’s success, and a triumphant continuation of the series – arguably its high point – that builds on the success of the original while making several significant improvements.

In the original, brothers Billy and Jimmy Lee rescue their shared girlfriend (awkward), Marian, from the Black Warriors. Apparently they do a crappy job because Double Dragon 2 opens with the leader returning and shooting her dead. It’s a rare video gaming moment – usually the opening sequence sees the token damsel in distress getting kidnapped by some cackling mook before you strike out to rescue her. I can’t think of any other examples, except maybe the arcade version of Ghouls n’ Ghosts, where your ladypal Princess Prin-Prin gets threshed by a laser bolt through the shoulder blades. But in that game, you get to battle Lucifer (Loki in the US and European localisations, mainly down to handwringing over stirring up moral panic amongst American Bible-thumpers) to get her soul back and revive her.

Actually, in the NES version, once you beat the final boss, Marian comes back to life. You know, like corpses tend to if you punch enough bad people hard enough. In the arcade, she’s just dead. You screwed up. Sorry! 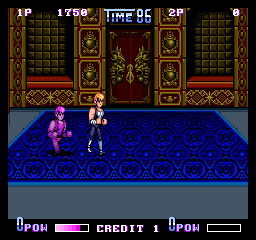 The whole reanimation retcon’s not quite as random as it sounds – throughout Double Dragon 2 we see evidence that the Black Warrior gang has mastered some pretty serious voodoo / necrotech. The first boss is a welding-mask-clad blubber mountain who turns gauzy and disintegrates if you wallop him enough. Later encounters with his palette-swapped clones have them dissolve only to reanimate, cackling. Once you defeat the final boss, steamshovel-jawed, machine gun toting ‘Willy’, a purple doppelganger rises out of your shadow, hurling blue fireballs and generally making a nuisance of itself. So basically what I’m saying is, why shouldn’t Marian come back to life? I reckon the in-world science is there.

DD2 is better than the original in lots of ways: there are more weapons, the control system is no longer punch/kick but left attack/right attack, allowing for crafty back heels and some slightly more responsive moves for handling yourself when surrounded. You can perform a roundhouse kick in midair, and punch and kick combos feel more fluid.

One of the oddest – and, for a fan of the original, most rewarding – aspects of the game is how closely it cleaves to the level design of the original. Towards the end of the second mission you realise you’re pretty much in the same area you were in Mission 2 of Double Dragon, complete with a pit, and – at the end of the stage – the famous conveyor belt moving towards a trash compactor. It is so satisfying to knock the Arnie-alike boss onto the conveyor belt and watch him fall off-screen without having to fight him properly. If you watch the gameplay video you can see me do it. I airpunched so hard, you guys.

After this point, the game pretty much follows the route of the original Double Dragon, out of the city, through the countryside, into the mountains, and finally into the Black Warriors’ base. The woodland of the first game has been chopped down (we see lumber strewn about) to make way for farms, and later fights involve jumping to avoid the blades of a combine harvester. Also there are some lovely cows, who make up for the absence of the cute kitty on a bin in the original. The Black Warriors’ stronghold is as frustrating and trap-strewn as ever, and really the last level is the weakest in the game, full of cheap moments that make you regret persisting.

Up until that point, Double Dragon 2 is a pretty great title. It hasn’t aged as well as Final Fight, which came out a year later, and the Double Dragon series feels like a twee curio rather than the classic it could have become. It certainly contributed to the tone and design choices of Final Fight and Streets Of Rage (and the pvp battle at the end of the latter) but was utterly surpassed by both, becoming an unfortunate stepping stone title rather than a great game in its own right.

I’d like to look at the final arcade release next week, Double Dragon 3: The Rosetta Stone. I don’t remember it as being very good, but then again, I remembered Golden Axe as being a crumpled paper bag of bulldog goolies, and I was wrong, so who knows? If you have any requests for games I should cover, or any memories you want to share, pop em into the comment box, hombre. 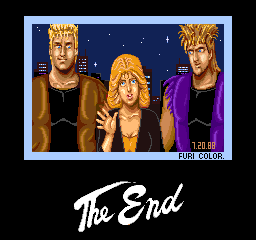