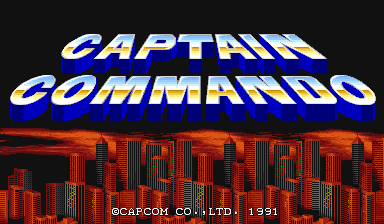 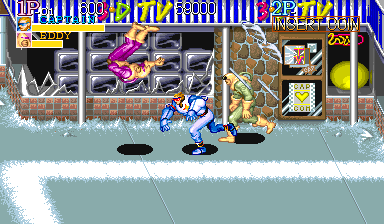 Captain Commando came out two years prior to Cadillacs & Dinosaurs and, in many ways, feels like practice run. A lot of the things that C&D does well are already present in this title, which builds upon everything Capcom had learned in Final Fight and ups the ante.

But there are also a whole bunch of shitty things that C&D wisely left behind. If Captain Commando is the Roman coin plastered in cow poo, Cadillacs & Dinosaurs is the perfectly preserved villa waiting just beneath the soil. 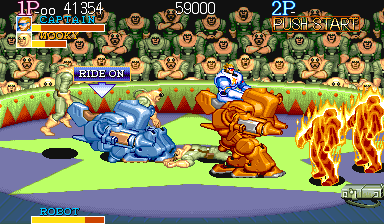 CC is set in a futuristic (well, 2026) Metro City – yes, the self-same crime-ridden metropolis liberated by barrel-chested wrestlemayor Mike Haggar in Capcom’s 1989 classic Final Fight. Things have changed since ‘Sometime in the 1990’s’ and instead of cackling crime syndicate Mad Gear, the city faces a new plague of miscreants, backed by alien mobsters from outer space.

The quartet hoping to bring law and order back to the city consists of eponymous erstwhile Capcom figurehead Captain Commando, Ginzu the Ninja, a dagger-wielding mummy called Mack the Knife, and Baby Head, a bubble-blowing genius infant riding a gigantic mechwalker of his own construction. 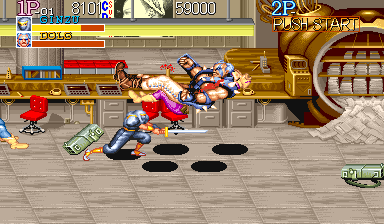 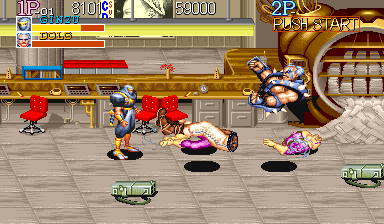 As with C&D, every character has a distinct play style – it’s one of the best bits of the game, in fact. Cap is an all-rounder with the ability to shoot jets of flame with his dash attack, and a desperation move that electrifies the floor. Ginzu is fast and wields a sword at all times – dash attacks can split enemies in half at the torso, which is always satisfying. Mack the Knife’s daggers can reduce grunts to a heap of dust and bones, and his desperation move turns him into a blade-whirlwind that can cleave through large crowds of enemies. Baby Head is just badass. So satisfying. He’s the Mike Haggar slow slugger of the gang, capable of flying elbow drops and powerful pile drivers. 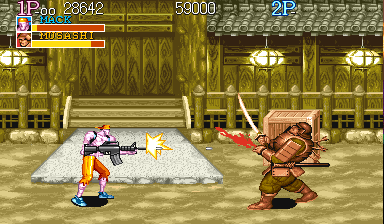 This game features a ton of weapons, too. From machine guns and pistols to rocket launchers and even death rays that stun your opponents, there’s almost always something nasty on hand that you can pick up and use against your opponents.

The mechwalkers are fun too. They borrow from the dragon and cockatrice mounts in Golden Axe – knock the rider out of his seat, and you can ride these slow but powerful robots. Green ones have a servo-assisted throw attack, red ones shoot fire, and blue ones freeze enemies. 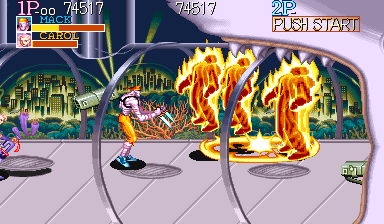 While the weapons create a lot of enjoyable mayhem, there’s a lot less balancing in evidence than in C&D. As the game progresses, stages often become a riot of explosions and shoulder barges and stamps. It’s not always easy to see what’s going on and take appropriate action. Gimmicky attacks that are amusing on their own quickly threaten to overwhelm the play area when several are used in tandem, especially during multiplayer games, where the screen often gets cluttered to the point of unplayability. 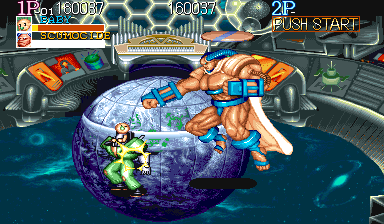 By far the worst thing about CC is the bosses. They suck. Aside from the first boss – an armoured dude in a bank vault – they are crazily overpowered with spammy, hard-to-dodge attacks that take a huge chunk of your energy bar. 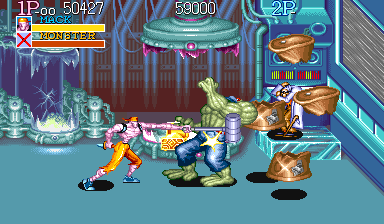 I realise that coin op beat em ups need ways of bringing in the credits, but if machine revenue is the golden egg, player enjoyment is the goose. Nothing about fighting the end of level bosses is fun. They don’t require a different play style, there are no particular attack patterns to master – nothing to reward player loyalty, to keep gamers coming back weekend after weekend, pumping their parents’ hard-earned quarters into the hopper. 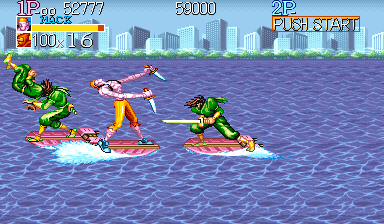 But it’s not as easy as dismissing this title as pants. There’s lots to admire, from the Turtles In Time-esque hoverboard bonus level to the breakable scenery and lovely background details throughout. The game is much more violent than other Capcom beat em ups – enemies drop to their knees on fire, spray blood as they split in half, and crumble into bones and dust. 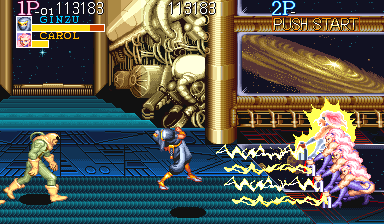 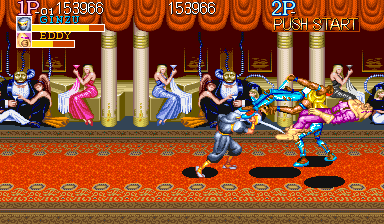 Captain Commando offers short-term fun. It was a machine you’d stick 40p in, scrap through a couple of levels til you got to the alien with the harpoon gun, then call it a day. Later levels feel rushed and cheap. Palette-swapped versions of earlier bosses, a mirror-match boss and the final showdown against a huge sprite with maybe 7 frames of animation all undermine what could have been a stone cold classic.

I know, I know! Some of you loved it. But look again. What we have here is a necessary but ultimately mediocre link in the evolutionary chain – a slime-covered half-aquatic abomination, dragging itself onto land, its vestigal gills rasping in the toxic air, its raw mouth working uselessly as it turns rheumy eyes skyward and expires. 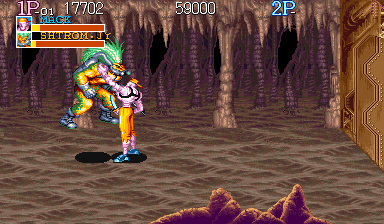 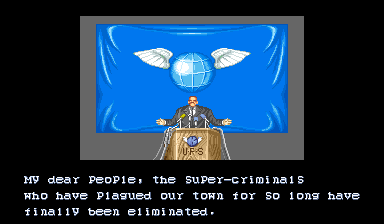 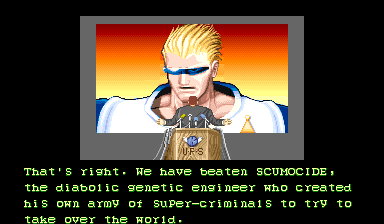 The Captain never took off as a Capcom ambassador – more visible flagship characters like Ryu and Megaman tend to act as the company’s public face – but he did appear in 1998’s Marvel Vs Capcom as a playable fighter. He can use all his attacks from the original game, as well as calling in the rest of the gang for a special team smackdown. 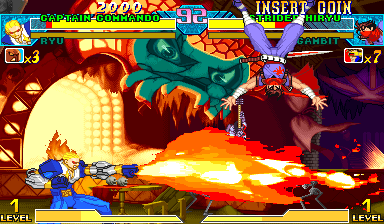 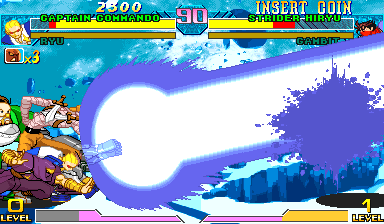