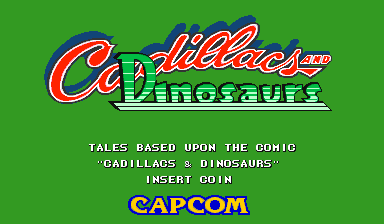 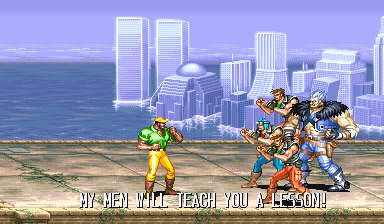 Ladies and gentlemen of the jury, I believe Capcom’s Cadillacs and Dinosaurs is one of the best 3D sidescrolling beat em ups ever released. Today, I will present you with incontrovertible proof of its badassery – indeed, so convincing will my evidence be, please have an inverted hat or similar receptacle on standby, ready to catch your balls when I blow them off.

Cadillacs and Dinosaurs – based on the animated series of the same name, which in turn was adapted from comic book series Xenozoic Tales – is set in a dystopian future, where humans emerge from hiding after the nuclear apocalypse to discover dinosaurs have returned. 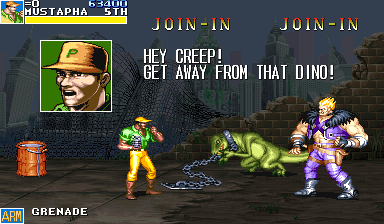 Since they first appeared in the 50s, post-nukegeddon stories have grown increasingly rosy. Once they were all blasted wastes and lengthy descriptions of characters’ hair dropping out after drinking from a poisoned spring. By the 90s, most nuclear holocausts had a bunch of sweet fringe benefits – roving mutant bikers, nascent psychic savants, giant apex predators and… dinosaurs. If Threads had gone down that route, I swear we would’ve blown ourselves up just to usher in the new era of desert warriors and showdowns against rad-zombies. 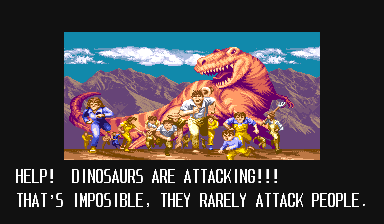 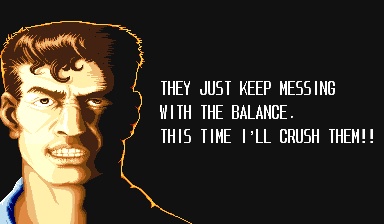 ‘Dino related crime rampant these days…’ After a gang called the Black Marketeers indulge in a little T-Rex poaching, garage-owning unreconstructed man’s man Jack Tenrec decides to take action. Specifically, he will continuously walk to the right, punching people in order of status, from lowest to highest. 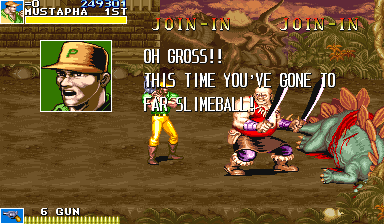 Up to three players can play simultaneously, choosing from a cast of four well differentiated characters: Jack, who acts as a meh all-rounder, Mustapha Cairo, a perpetually yellow-trousered athletic gentleman who is fast and very good at flying kicks, Mess O’ Bradovich, who fulfils the Mike Haggar slow-but-hardcore role, and Hannah Dundee, who is weak but uses the various weapons scattered about the playing area well (apparently). 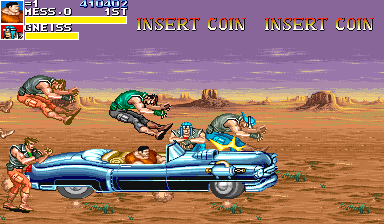 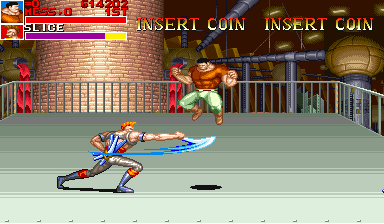 There’s so much to enjoy in this game. Every character has a great range of moves, from standard punches and kicks to double-tap dash attacks and simultaneous jump-kick desperation moves that sap a little energy while dealing a killer roundhouse. Playing as Mustapha feels very different to playing as Mess – your positioning and tactics need to adapt to your character’s strengths, or you’ll get creamed. When you’re tackling the game with a friend, you can team up to perform tag team moves – a small feature that adds that extra pinch of replayability. 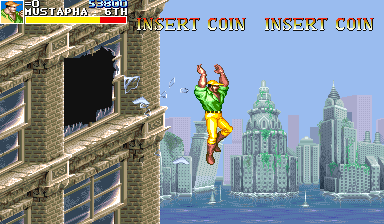 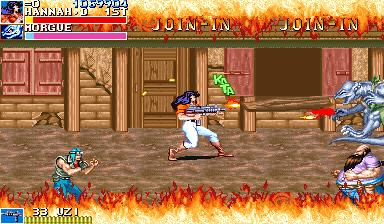 The range of weapons is what sets this game apart, though. Captain Commando and Punisher are the only two other title that come close. Even something as standard as a knife feels well-executed – it adds range and power to your attacks, allowing you to fend off enemies at a slight distance, and if you hold down while attacking, you can use it as a projectile weapon.

And what sort of asshole would you have to be to not enjoy blasting a human-dino hybrid with an uzi? A boring one, that’s what. 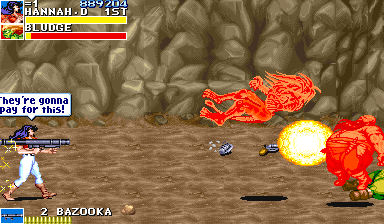 Chuck giant swords, pistols, grenades, shotguns, bazookas, rifles, flaming clubs, 2x4s and bundles of TNT into the mix, and you just know you’re in for a good, extremely violent time. 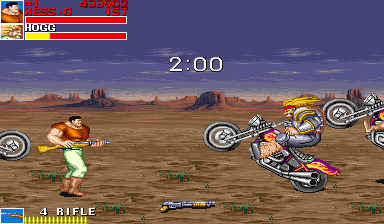 Cadillacs and Dinosaurs has the best boss battles of any sidescroller ever. If I’m wrong, I’d love to hear your alternative candidates for the crown, because – as far as I’m concerned – this game takes one of the weakest aspects of the genre and totally nails it, level after level. 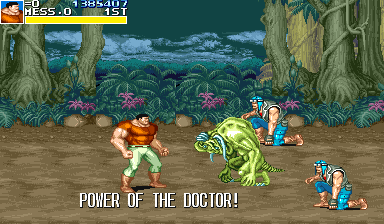 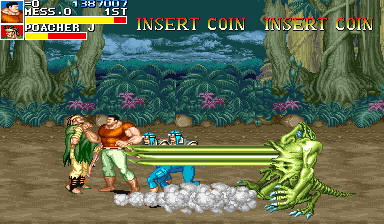 The greatest boss battle of the game – and therefore the best sidescrolling beat em up boss ever – comes when you first encounter mad scientist Dr Fessenden’s symbiote – a vaguely aquatic face hugger than transforms one of the game’s weakest grunts into a musclebound dino-human killing machine that shoots spikes from its chest. 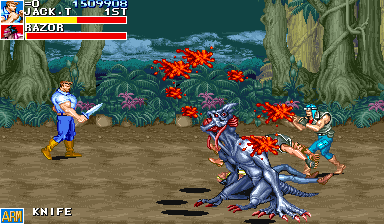 It’s an ace battle that sets up the final showdown with the gene-splicing megalomaniac himself, but also features a fantastic gameplay mechanic. Beat the monster, and the face-hugger detaches, and immediately latches onto a nearby grunt. Depending on who it bonds with, it gains different abilities – from shooting fireballs from its chest to vomiting a great crimson cascade of acid. 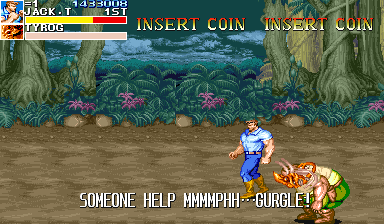 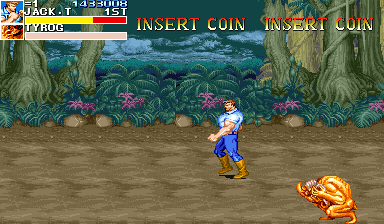 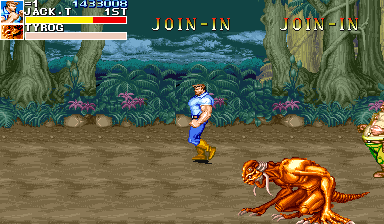 If you can get to the parasite before it fuses with its next host, you can end the boss battle early, otherwise you’re forced to fight it in all three of its – increasingly powerful – forms. Like every fight in the game, the battle is tough, but completely fair. There are no spammy, undodgable area-effect moves to eat up your credits. You can apply tactics and actually hold your own. 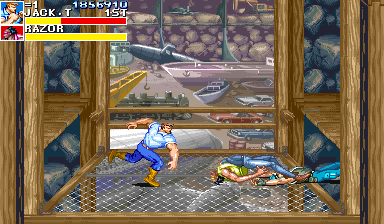 The game really benefits from all the world-building already established in the comics’ canon. It allows for a (relative) lightness of touch in moments like the otherwise familiar elevator stage, where, as we descend deep into the earth, we get a glimpse of an enormous underground hangar containing a dizzying area of technology salvaged from the old world by Dr Fessenden – cars, boats, trains, and even a jumbo jet. 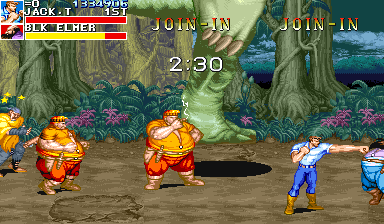 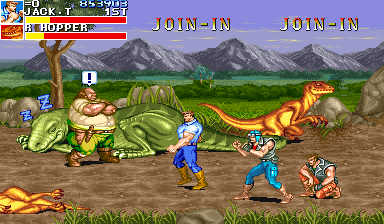 The levels remain diverse, introducing new gameplay elements right up until the end. Enemies will deliberately punch sleeping T-Rexes to wake them up and send them on the rampage. A giant Diplodocus foot stamps friend and foe alike. Jets of fire spray from the walls and boulders clatter down the mountainside.

It’s just… so much fun, you guys. A rich fictional world, responsive controls, and a whole section where you get to drive a cadillac through the desert, running over enemy grunts and smashing barrels. 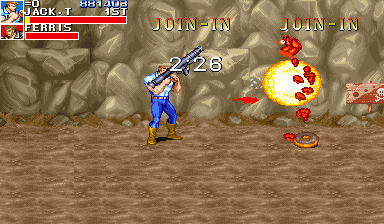 Seriously. If you’ve ever enjoyed a sidescrolling beat em up, why wouldn’t you go play this right now? Find a buddy, fill one bowl with salt and vinegar Discos and another with M&Ms, and hunt down this game. 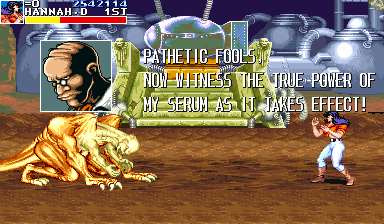 Actually, the only pooey thing is that Cadillacs and Dinosaurs is unlikely to ever see a legit re-release on a modern system. The game includes a license agreement with General Motors that allows it to feature official Cadillacs – apparently the company were keen that their automobiles be seen to be the dominant mode of transport in a post-apocalyptic hellscape where humanity has lost the ability to refine petroleum and the few remaining vehicles run on dino guano. Renegotiating a license for the game’s release on Live Arcade or suchlike is probably too much of a legal ballache for Capcom to bother.

If you want to read my previous articles on beat em ups – about which I am slowly writing a patchy and heavily-biased history – then by all means click away. I still have quite a few sidescrollers to go before I get onto vs beat em ups and sports beat em ups. *sighs*

What’s your favourite boss battle ever in a beat em up? Please let me know in the comments or drop me a line. I’d love to know if I’ve forgotten an obvious one. 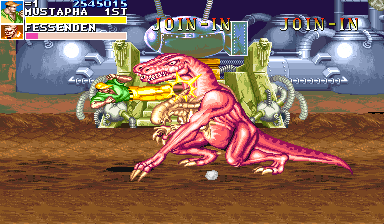 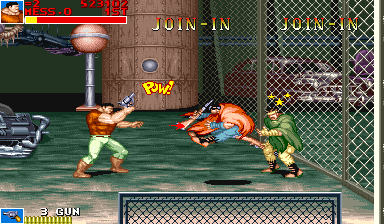