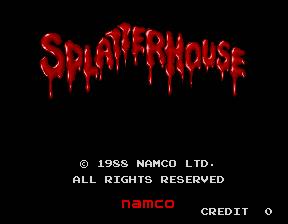 So, since it’s Halloween I thought I’d write a leetle summink on some of the creepiest, crawliest, soil-your-drawersiest video games of all time. ‘Of all time’ is an unnecessarily grand phrase when discussing video games, given that the medium has only existed for just over 30 years. Still. Woooooo!

Now some of you suckers may well be expecting me to plunge into a lengthy celebration of survival horror ‘classics’ like Resident Evil and Silent Hill, or maybe ladle out some praise for Left 4 Dead and its sequel. Wrongo. I’ve not played Left 4 Dead, so I’ll reserve judgement, although I was a big fan of (and something of a dab hand at) House of the Dead when it came out in the arcade, so if it basically involves shooting at wave after wave of marauding revenants while loudly berating your co-op players for incompetency, I’m in. A truly top-notch co-op game is a rare thang of le beauty.

The problem with Resident Evil, Silent Hill, and the many sequels they spawned, is they’re just not very good. They come from the ‘create suspense by making the player walk around’ school of survival horror, where you spend the majority of your game plodding round large, samey maps, with a few cut-scene tripwires scattered here and there, so after half a dull, mind-ablating hour of flipping switches up and down in service of some criminally unimaginative puzzle, you’re lulled into a state of soporific semi-doze then BAAWWAAAAAHHH FUCK IT’S A SCARY JACKDAW! and you spill your Dr Pepper and let off five of your measly six bullets killing the thing, then it’s back to the lever ‘puzzle’. Playing these games feels like being an air traffic controller – hours of tedium punctuated by moments of rabid life-or-death panic. Never mind the infamously appalling voice acting, the leaden plots, the forgettable, identikit characters – these games are bad at the design level. The game mechanics are no more than a cruel afterthought.

Now, if you want a genuinely well-designed playing experience, may I suggest Bogey Manor? 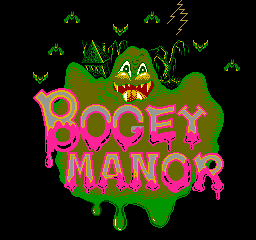 Bogey Manor is a platformer that sees you, a plucky stick-wielding chappie, heading into a succession of haunted houses, determined to smash the magical orbs therein, thus bringing each building crashing down around its unearthly occupants. Trying to frustrate your efforts are ghosts, Frankenstein’s monsters, witches, weird blue furballs, and mummies. 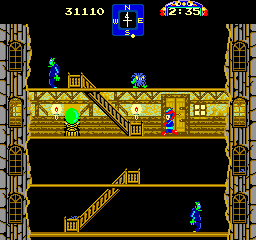 It is awesome. All the baddies have different attributes – ghosts can teleport between floors, Frankenstein’s monsters can bash rotating sections of floor causing them to activate, witches can fire projectiles – meaning you need to employ a variety of strategies to make it past them. Your stick has no effect on ghosts, for example, but – brilliantly – there’s a button that makes your man point emphatically at something behind them. The ghost will obligingly turn to see what you’re pointing at, allowing you to run past, but when they realise they’ve been tricked, they become enraged, and chase you. 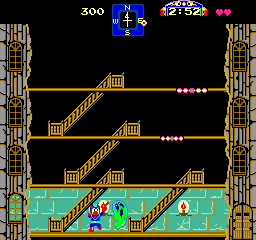 Each house has multiple screens. Once you’ve found and smashed all the orbs, it begins to collapse, floor by floor. A frantic race to the exit ensues, involving genuine tension and excitement – proof that you don’t need to waste hours of a player’s time with ambient music and echoing rooms if you want to give them a thrill. 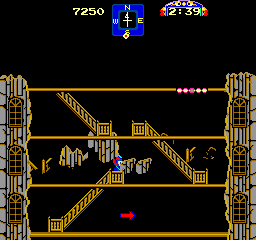 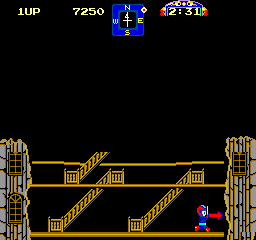 All right, old man, I hear you cry, we get it. You just want the kids to get off your lawn. Gamers these days don’t know they’re born, right? Why, back in your day, games were games. You had four levels, three sound channels, and you were grateful! You paid £65 for Streetfighter II on the SNES, and you felt like you’d got your money’s worth! 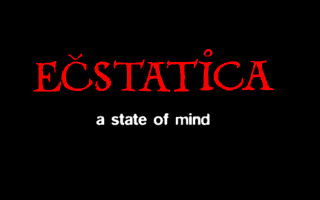 Set in Northern Europe in 928 AD, the game stars you as an unnamed traveller, either male or female, who stops his horse at a village to get water. However, the village seems deserted… 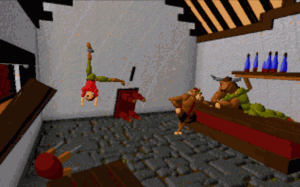 It’s not, obvs. The image above shows just one of several possible grisly fates for the protagonist. That’s a wolfman, a dragon and a minotaur chilling having a pint at the bar, with you strung up by one leg from the wall. Not what you wanted at all. Despite the early mix of ellipsoids and polygons giving the whole thing quite a twee, cutesy look, it’s a damn chilling, jumpy adventure. There are plenty of cheap deaths on hand, from spear traps shooting out of the floor and impaling you, to a suit of armour which proves too heavy to wear, pinning you to the ground until the monsters find you, but the ‘you-could-die-any-moment’ vibe ends up adding to the atmosphere rather than detracting from it. The first few plays through, you feel genuinely hapless and terrified, wandering round this eerie, abandoned village, only for a wolfman to leap at you down an alley, knocking you off your feet. Eventually though, you start to get your shit together and fight back. The game allows state saves, so even though there are instant deaths on offer, if you’re saving in a sensible way, they should only set you back a minute or so of game time.

One thing that adds to the spooky ambience is the lack of health bars for you, or the baddies. You find yourself sucked into these lengthy scraps, where you’re swinging at a critter, dodging return blows, but they don’t seem to be giving up, and you’re thinking c’mon, c’mon, go down! The next hit might see your man teeter then collapse, so you never feel complacent at your abundant energy reserves. As you pick your way through the village, you start to get a sense of what’s happened – seems a few people have been monkeying about with forces they don’t understand, and now demons are on the loose. After solving various puzzles and hacking through baddies, you eventually get to meet the Devil, who offers you the opportunity to side with him in return for whatever you want. Agree, and the game ends with you eating grapes by a poolside, surrounded by a bevy of sexy servants. Refuse, and you have to fight Satan, but if you win, the magical girl he’d kidnapped awakens, and she is well up for marrying you, so you still get some play. Actually, I’ve never completed it as a female character, so I don’t know if the genders are reversed in that scenario – but why would they be, anyway? It might be the Dark Ages, but that doesn’t mean we have to be predictably heteronormative about it. More like hetero-snore-mative – am I right?

The most scary video game ever, though, is Splatterhouse. It’s horrible. 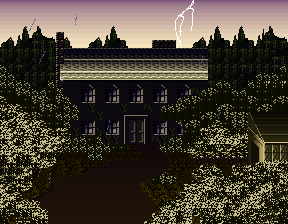 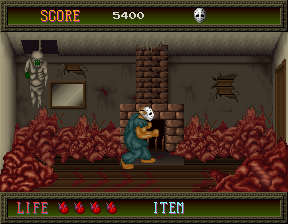 When you awaken, you’ve been possessed by a haunted hockey mask (not that Namco wear their influences on their sleeve, or anything) and must fight your way through a mansion full of guts, aliens, swamp-monsters, chainsaw-limbed executioners, putrid midget corpses hanging from nooses, bats, zombie dogs, shuffling hyperencephalic foetuses, spinning blades, severed hands and possessed furniture. You even have to beat the ever-living crap out of your own girlfriend, as she morphs between her frail self and rasp-taloned pouncing harridan. Like I say, horrible. 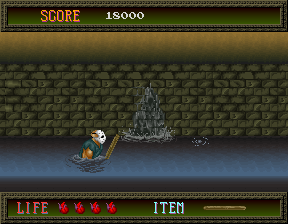 The game makes no attempt to create suspense. You’re just bombarded with relentless insano brainspew. You don’t even get to stop and catch your breath – an unexplained deadly morass of purple fog and static electricity is constantly chasing you, just because it can. Despite all the monsters and traps it throws at you, for a side scrolling beat em up Splatterhouse is remarkably fair. Most beat em ups released around this time grind you down with waves of grunts and expect you to progress through sheer force of coinage, pumping in extra credits to refill that health bar. Splatterhouse might be intense, but it’s learnable. With practice, I’ve managed to get to Level 4 (there are only 6 in the game [EDIT: 7, actually]) without taking a hit – something which the game rewards by boosting your life bar past its starting max of 4 hearts.

But I think the most unsettling thing about Splatterhouse is the music. It’s full of shrill lead melodies, helter skelter minor bass lines, sour chords and horrible microtonal stuff that makes me feel dark inside. Ugh. Look, here’s a youtube video of the first half of the game so you can hear for yourself. Just don’t blame me if you mess yourself out of RAW TERROR. Mwahahahahaha! Happy Halloween, dear friends.