Oh my goodness. What a busy bee I am this week. And yet apparently making as much impact on my workload as an actual bee. They’re not even heavy enough to operate a keyboard. So, look. Why not read this week’s performance poet interview, with the very witty, very tartan Elvis McGonagall? 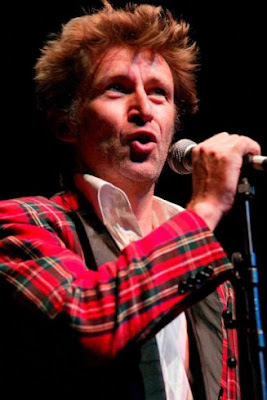 I fell into it, in the deep end, by accident, whilst drunk – entered a slam at the Cheltenham Literature Festival in 2003. Thus Frankenstein’s monster was born.

How would you describe your work?

The happy sound of the four-letter word that is work. Sadly, a sound that is all too sporadic round these parts. The “performance” part is essentially shouting at strangers in a dark room, usually in the evening, whilst wearing a loud and increasingly tight tartan jacket. As far as the “poetry” bit is concerned if the content had to be labelled I guess it would be “political satire and gratuitous celebrity bashing derived from a deep well of bile and anger. In verse”.

One is better written down.

Which is probably why I’ve always felt a wee bit ambivalent describing myself as a “poet”. Also, I don’t have the fedora, the fur-coat or the cuban heels. “Wordsmith” is perhaps a more accurate description. Or “versemonger”. But for want of anything else “stand-up poet” will do.

And poetry existed way before William Caxton so that’s alright.

So that the likes of you and I are not left abandoned on a stage in a tiny empty room above a pub as tumbleweed drifts past forcing us to confront the futility of existence. And, on a good day, you might see all manner of exciting, entertaining, thought-provoking performers delivering wonderful words in defiance of the brutalisation of our glorious language by stubby-fingered neanderthal “txt” messages.

On the other hand on a bad day it might be absolute shite. But in any event it’ll probably cost less than a fiver. And it would still be better than sitting on the sofa watching Piers Morgan interview Ulrika-ka for an hour. An hour. What the flying fuck is going on?

All my stuff is really written for my missus so I asked her and she said “This Land’s Not Your Land” because “it makes her cry and want to sleep with me”. That’s more than good enough for me (although I do hope it’s not the only piece that might assist in conjugal bliss as it’s been retired from performance since Obama’s election).

Ah – there are many and various candidates. Enough to fill a small anthology. Something very short would be ideal to nick – the equivalent of shoplifting items that easily fit up your jumper – perhaps Byron Vincent’s Elton John haiku. Although that would be pointless because I can only ever remember the last five syllables despite having heard it on numerous occasions – too busy laughing to remember the other twelve. Or perhaps something that is radically different from anything I might do, such as Henry Bowers’ “All Out Of Dogfood”. But that would be equally pointless as I’d never be able to pass off as my own work that of a Swedish hip-hop Tom Waits-influenced bearded rapper. There are many, many others. Too many to list here.

Self-indulgent bollocks that sends an audience to sleep. As the late, great Adrian Mitchell said “most people ignore most poetry because most poetry ignores most people”. The litmus test is my mate Matthew’s spectacles – if he’s in the audience and he takes his specs off then it’s really, really bad.

What do you think of the state of the UK performance poetry scene at the moment? Is it okay to talk about a ‘scene’, or is that a bit unhelpful?

For some reason the word “scene” throws up an image of Peter Sellars in a beret and black polo neck reciting bad beat poetry in a dingy, smoke filled cavern somewhere in Swinging London. Not sure why.

Anyway, on occasion the scene seems to be in rude health with a whole raft of fantastic performers out there and a potentially huge audience. But then again it sometimes feels like Hercules’ 13th labour trying to do this for a living – particularly when I’m staring at the cows at the bottom of the garden.

And the cows stare back.

I supported John Cooper Clarke a wee while back which was a thrill and he said “fucking fabulous” after my set – but I think he was being a gentleman.

A self-confessed lifelong Tory with a political viewpoint quite possibly more extreme than Genghis Khan heaped praise upon a piece I do called “You Can Call Me Dave” (which is none too complimentary about David Cameron’s rhetoric). Nice to know that Dave unites left and right.

After my first appearance on Radio 4’s “Saturday Live” Rachel Cooke, writing in the New Statesman, described me as “…someone you’ve never heard of whose every stanza sounds like it was written by Les Dawson on the back of a fag packet”. Beautiful.