So I went to the fair last night. By day, I’d watched dozens of caravans jaw open, folding out into huge anglepoised monstronsities and structures like giant mechanical crabs barnacled with coloured bulbs. Kids on BMXs rode between dusty parked vans. Petrol generators began putt-putt-putting. Hotdog stalls rolled up the silver slat of their mouths as onions hit the hotplate, hissing and squeaking. Then the music. 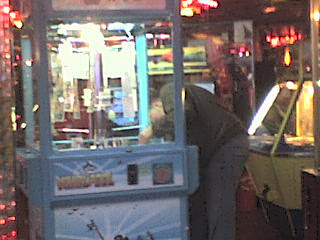 It’s hard to tell, but this is a picture of a man digging around inside the iPod grabber crane machine. I assume he was the owner.

Me and Ross plodded amongst the rides and games, tugging on beers and feeling well teenagery. I admired the airbrushed artwork adorning the various rides, consisting almost entirely of unlicensed movie character mash-ups. I was a bit disappointed at the low turnout of apocrypha – usually there’s some kind of rollercoaster called ‘Knightrider’ with a picture of Frodo piloting a tank – but it was nice to see the children’s ‘Funhouse’ depicting Winnie the Pooh and friends apparently recoiling in confusion and horror as a gang of non-canon anthropomorphised animals rushed towards them (there was a bear with librarian’s spectacles and a green bowler hat, also some kind of cloth-trousered warthog). The air was filled with strangled screams, the hiss of pneumatics, and a sickly meshwork of competing choons.

‘Thanks to carnivals, Rave will never die,’ said Ross. Each ride had a dark little rectangular booth, from which the ride operator would launch short bursts of faux-DJ patter with clipped, very nasal aggression.

‘Excuse me.’ The shorter of the two was carrying a little red bike on her head. It was about the size of hi-fi speaker. With the bike on her head and a handbag dangling in front of her knees, she resembled a kitsch, rather unambitious totem pole. ‘Do you want to buy this? Only a quid.’ We chose to pass up her offer, although she fought long and hard to change our minds. Her main selling thrust was that she was only asking a quid. Ironically, that was my central reason for turning her down. The knock-down price made me suspicious that the bike might be cursed. I don’t doubt accepting it would have sparked a chain of parlous, zany events ending with a knife fight in a submarine over a cache of lost doubloons, but I didn’t want to carry it round all evening.

‘Okay, move inside for the next ride, let’s go!’

Eventually we came upon a shooting gallery. There were rifles and crossbows. I went for a crossbow – I’d never used one before but I reckon crossbow skills will be more handy in the forthcoming apocalypse, since crossbow bolts are reuseable and therefore more economical. The gruff stall owner with grey hair and a sweat dappled navy blue t-shirt showed me how to load a bolt. On the other side of a – frankly pathetic – simulated jungle vista, was a paper target. I glanced across at the rules, and discovered I had to get a bolt inside the red star to win.

I leaned forward, bracing my elbow against the countertop, lined my eye up with the sight, aimed at the centre of the red star, then tilted the crossbow up a bit, to account for drop-off. My fingertip balanced on the rusty trigger. I squeezed. 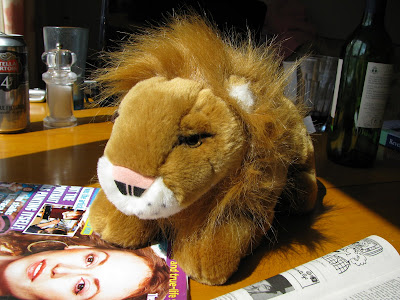