I’m a broken man. In my infinite naivety, I believed that any game called Ninja Clowns would have to represent some high watermark of human endeavour. Because, you know – they’re ninja fucking clowns, dude.

Turns out that the obscure 1991 side-scrolling beat ’em up Ninja Clowns is literally one of the worst games ever made. Imagine reaching into your trouser pocket, only to discover that what you thought was a yummy chocolate bar is actually a festering bum egg striated with tapeworms. That’s how you’d feel if you’d paid 10p for the chance to play this abomination. 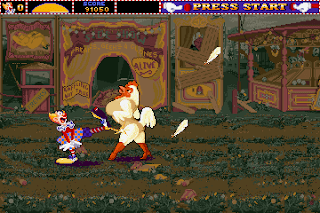 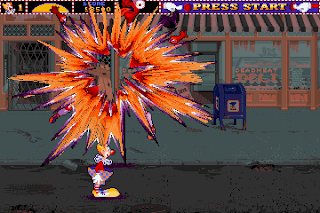 What these pictures don’t show is the appalling animation. Each enemy has maybe three or four frames of movement, jerking and spazzing across the screen like a break dancer with chest cramps. Every bad guy has an identical attack pattern – they walk directly towards you, and if you don’t mash on the punch and kick buttons in time (or the appalling collision detection decides renders your best efforts useless), they’ll hit you. As the aforementioned ‘ninja clown’, you face legions of tedious, poorly-realised stereotypes, including accordion-playing Elvises who say ‘I’m gone!’ when you kill them, in a vaguely American accent. You know, because Elvis famously said ‘I’m gone!’ didn’t he? That was one of his famous catchphrases.

The music for the first level is punishingly unlistenable – that generic ‘Bring On The Clowns’ circus theme, rendered as a minor key reggae track. CND-medallion sporting hippies try to batter you with placards (in a two-frame animation), coming out with such hilarious hippy catchphrases as ‘Hey dude!’ and ‘Woodstock, man!’ Ah ha ha ha, I just lost a rib.

Having torn it from my chest cavity out of sheer despair. 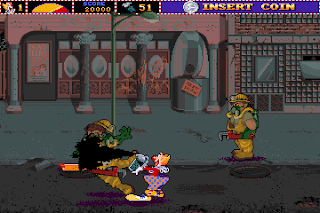 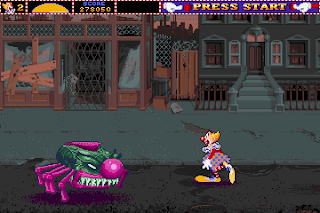 The biggest disappointment of this game was discovering that the clown isn’t a fucking ninja. He’s just a clown who kicks people. ‘Kicking’ isn’t ninjitsu. The makers cynically stuck the ‘ninja’ prefix in there because Turtlemania was still big and they thought they could just clamp onto its throat like some dark-bristled beetle and suck all the juicy goodness out of the last beautiful thing in this dirty, ugly, dirty world.

Well fuck you, creators of the Ninja Clowns coin op. I hope your children disowned you and all you’ve got left, some 18 years later, is your own steaming jobby of a video game for company. 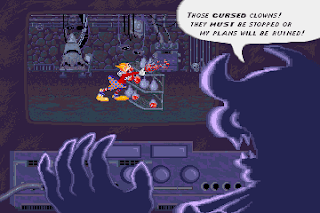 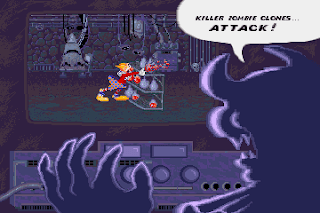 This single screen is your only reward for completing the game. Yeah, keep driving you smug bastard. Drive your ludicrous noncemobile right into the fucking sun. 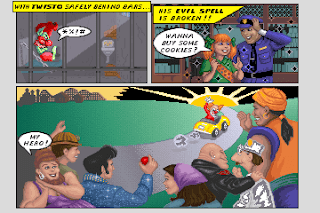