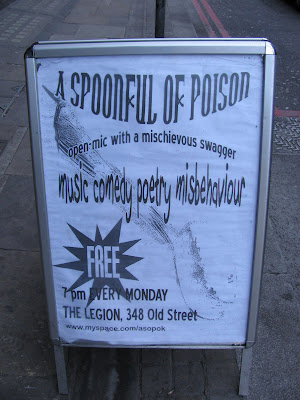 On Monday, I went to Spoonful Of Poison at The Legion in Shoreditch. 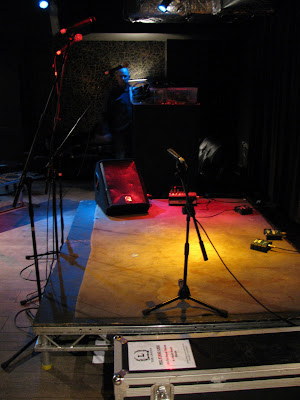 The night’s compered by ‘Vis the Spoon’ – he’s got a frenetic, noisy, funny compering style that suits the night perfectly, and an awesome quiff. 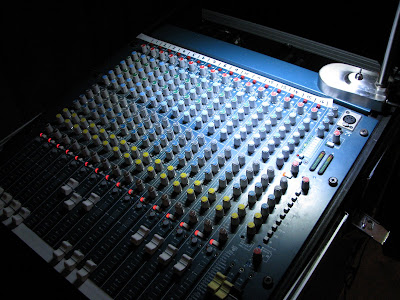 The acts are put on an egg timer that rings when their time’s up. Most people I saw were bang on the bell – to the second. There’s a mix of music, spoken word, MCing, and sort of random, unidentifiable stuff. A guy got up on stage, with a mate carrying a bass guitar. The bassist didn’t say a thing or play a note for the whole set, and the guy didn’t do anything except shout at people at the back of the room in an attempt to engage them in banter. I don’t know if he thought he was a compere or something – I kept waiting for him to start his set, but it never happened, then the bell rang and he got shepherded off.

I did a new performance poem for the first time. I also tried a joke I’ve been wanting to do for ages. Result: crickets. But, you know, it is bad. So. I got heckled a bit. I didn’t have anything clever to say to the heckler – I must have looked pathetic because next he yelled: ‘Sorry!’ Bless. There was an MC on after me, who did a rap where he said: ‘Fuck the government,’ lots of times. There was also a guitarist who did a song which had the word ‘broken’ in it a lot. I think the song might have been called ‘Broken’. I’ve got some live footage of that.

I’m going to sit down and get back to writing some new stuff. The challenge is to make material as short and punchy as possible. Nay waffle. Then I have to learn it. In terms of stagecraft, what I’m learning is you need to try not to waste a moment of stage time. Easier said than done.

However, I’m a bit worried doing all these open mics may make me a considerably worse performer. I get the impression that a lot of performers at these open mics get through it by making themselves oblivious to the audience’s reaction. That means they can’t tell if they’re rubbish. One of the best ways of getting through these kinds of punishing gigs seems to be a huge whirling shield of self-delusion. It encourages you to just stick your head down and rattle through stuff, shouting, because if you look up you’re bound to catch the eye of somebody who’s yawning, or frowning, or maybe sniggering at you.

But I’ve been meeting some really interesting people. And one thing keeping me going is the apparently completely sincere messages of support and encouragement from friends. They seem to be under the impression I’m doing some kind of charity fun-run or something, but hey – it’s keeping me going, and making me want to give it all my best shot!

When we were working on the Local Boys Done Good project, going round all our hometowns doing gigs, Ross observed: ‘You’re only ever 5 crap gigs away from quitting.’ We laughed about it at the time, but it doesn’t seem quite so funny now.