So yeah, had a faboo weekend over in Liverpool at the Bluecoat, doing some challenging and fun gigs and getting to soak up some culture. I really enjoyed doing the Revolutions In Form gig on the Sunday, which featured live doodles, a poem passed Chinese Whispers style through the whole audience, performance art, music and film. I realise I’m not a very credible advocate for a gig I was part of, and I don’t usually like bigging up gigs I liked anyway, because it makes me sound like an awful fawning luvvie, but I thought it was a really interesting show. ‘Performance art’ especially gets a bad rap as a blanket term, but at its best it just means someone doing something cool and fascinating live.

Um, so next Wednesday, the 28th of October, you should come to the final Homework of the season. Aisle16 will be performing The 9½ Commandments Of Aisle16. Okay, here’s the pitch:

‘When the British Council approached stand-up poetry collective Aisle16 wanting to commission a brand new live literature show for a “live, appreciative audience”, they jumped at the chance. After doing a poetry tour of Britain’s motorway service stations and becoming the world’s first poetry boyband, as well as their regular appearances at festivals such as Glastonbury and Latitude, they were used to taking verse to new audiences. But there was a catch.

The show would be at the 2nd Annual Children’s Book Festival in Athens – and the “live, appreciative audience” would be composed entirely of Greek 7-year-olds, who hardly spoke any English at all. Never ones to shy away from a challenge – or money – Aisle16 set about trying to write a new poetry show that could be understood by people who barely speak the language.

The result is The 9½ Commandments Of Aisle16 – a stand-up poetry show featuring fat bullies, God’s rejected fish prototypes, and a portrait of the yeti as a young man.”

So that’ll be Chris Hicks, Luke Wright (interviewed here), Ross Sutherland (interviewed here), and Joel Stickley (interviewed here). There’ll also be supporting performances of new material from me, Joe Dunthorne and John Osborne. Which means it’s going to be that hella rare equinox where all seven members of Aisle16 are in the same place, at the same time, performing at the same gig. I know. You’re correct to water your underpants in entrancement and terror. It will doubtless be a dead good finale to a super-successful season of Homework. Come, imbibe heartily with us as we say adios to our darling literary cabaret night for another year. And gawd bless the Arts Council for supporting our efforts. We’ve done our best to make it memorable, and give our audiences something more interesting than just blokes chuntering on in a vaguely artsy way.

Oh, and hey – you ought to check out the new online ventures from two of our members. Joel Stickley has started a blog called How To Write Badly Well. Partly based on his experience as a creative writing tutor, each short lesson builds up into a step-by-step guide on how to excel in composing dreadful prose. He claims he’s going to update every Friday. Even though this seems a modest schedule, from experience I expect it will prove to be a SORDID LIE. Still, you should read it because it is well-wrought and funny. As someone who does a bit of the old creative writing tutoring from time to time, I enjoyed a few recognition laughs, along with a few twinges at stylistic gaffes I’d committed myself.

Also, Ross Sutherland has a new website up, here. Lots of poems, vids, links, gig dates, etc. I reckon ‘The End Of Our Marriage’ is particularly good. 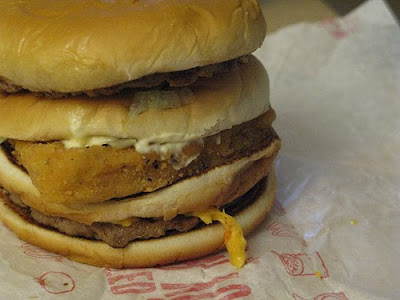 In other news, after a weekend of appalling eating habits in Liverpool, including two takeaway pizzas and two meals at McDonalds culminating in a McGangbang (a double cheeseburger with a chicken mayo shoved in-between them… I KNOW) I am in the midst of a week of detox. No alcohol, no nicotine, no caffeine, no meat, no dairy, no sweets, no crisps. Steering away from unrefined carbs and stuff that’s high on the glycemic index as much as possible. Losing Diet Coke feels like the cruellest blow thus far, which I suppose only goes to prove how much of an addle-pated addict I am. Yesterday I spent the whole day feeling like absolute crap, with a pounding headache. Today, I feel a bit better, albeit enfeebled. It’s only until Saturday morning, anyhow, then I get to go right back to stuffing hot hogsflesh into my slavering unclean craw.