3 WEEKS IN THE LIFE OF A NEW BOOK 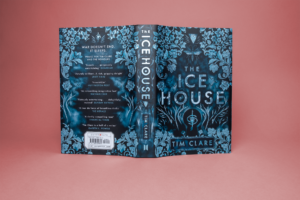 A few listeners to the podcast have asked me for an update on how my new novel, The Ice House, has been selling. I thought it might be useful to break it down so you can see one example of what it’s like being an author with a second novel out.

There’s a very British terror when it comes to talking about money, and I can’t pretend I don’t feel it now. But if a culture of silence around earnings serves anyone’s interests, I doubt it’s those of workers. So here we go.

The Ice House came out on Thursday May 2nd. Since then, 2000 hardback copies have been sold to shops in the UK, South Africa and Australia. Of those, about 300 have actually been bought by customers.

I said on the podcast that you need to do about 1500 hardback sales in a week in the UK to get on the bestseller list. I know that around 80 copies were pre-ordered through indie bookshop Mr B’s Emporium, and perhaps another 70 or so through my affiliate links to online bookshop Wordery. So probably more than half of sales so far are to listeners of the podcast.

That leaves around 150 books either hand-sold or bought through online outlets, so in terms of how The Ice House has been doing in the shops, you’re looking at around 50 sales nationwide, per week.

Not a lot, right?

When The Honours came out it got a really nice review in the Guardian Review, in the literary fiction section. There was a big picture of me and everything. That noticeably bumped sales. It was also reviewed in the Financial Times, the Express, featured in lists in the Independent, and blurbed by four high-profile authors before its release. It got longlisted for an award for debut novelists.

The Ice House has had two print reviews so far, no features, and one online interview. That might well be it, in terms of coverage. This time, almost all the authors we sent it out to didn’t read it.

Which is fair enough! I don’t have time to read a lot of the novels sent (usually unsolicited) to me. I have to prioritise ones sent by people who are going to be guests on the podcast, or I wouldn’t have time to write.

I got an advance of £15k for The Ice House. Once you take off agent’s percentage and tax, your take home is closer to £12k. It took me four years, so that’s 3 grand a year.

It also means I have to sell a lot of books before I get close to earning out my advance and starting to receive royalties. Hardback sales earn me slightly more than paperbacks.

Writing is my main job, alongside parenting. It’s my only source of income, since gigging became harder to do on account of my anxiety and staying home to look after Suki. So, as you can imagine, money has been incredibly tight and the career side of things has been a major source of stress.

On the other hand, I love writing so much. I love storytelling. I’m not a natural salesman and I don’t suppose I write to a market but I am very, very happy with the art I’m putting out into the world. Being a dad brings me so much joy as well. I’m incredibly lucky, I make new connections every week, I’m fit and healthy and surrounded by kind, wonderful people. So it is… tough, but I don’t feel in any way hard done by. I feel as if I have won multiple jackpots in life and it would be churlish in the extreme (not to mention pointless) to grumble about not having more.

As an author there’s a subtle pressure to constantly project an image of dazzling, unbroken success, in the fear that, by admitting setbacks, disappointments, shortfalls or financial hardship, one is revealing failings in the work. I often fear that showing anything but unmitigated triumph will put people off reading my work. Social proof is a powerful incentive to check something out. If loads of people are buying and loving my work, don’t you want to get on the bandwagon?

It’s worth saying that 300 hardback sales thus far isn’t disastrous, and the reviews have been really positive. From this point on, it’s hard to get press except via awards, and as the second book in a Fantasy trilogy it’s going to struggle against releases by higher profile authors, so I’m not holding my breath.

To be clear, I feel very lucky that the book is out, and aside from the usual anxiety I manage, I feel happy. I love what I’ve written and love seeing it connect with people. Even my anxiety has worn off compared to how it used to be – I haven’t had a panic attack since March.

I also want to say a sincere, heartfelt thank you to everyone who has given their encouragement and support. I don’t want to let anyone down and I’m so grateful for everyone who has shared a link or bought a copy of my book or taken the time to send me a kind word. It’s wondrously kind of you.

I just wanted to be honest about the maths of this thing I do ‘professionally’. And without the usual conclusions about this being an indictment of the publishing industry or the reason why I can’t continue. I’m sorry, I will always write because my stories are fucking rad and you need me.

But if you’d like to help me on that journey, you actually have a lot of power. Here are 5 things you can do right now that can give me a couple of health potions to help me on my quest (only one of which costs money):

Get The Honours and The Ice House right now.

If you’ve read either novel please go onto Amazon and share your thoughts in one or two lines. It helps folks find my books and once a novel reaches 50 reviews it starts being shown to more readers. Sometimes Amazon reviews are the only independent opinion about the book potential readers get to see. (be honest!)

Share the above links on Twitter, Facebook, Instagram, so people can go read about the novels themselves. The fewer clicks folks have to make til purchasing, the higher the likelihood of an impulse buy.

‘Told in rich, allusive prose, The Ice House is a leisurely meditation on good and evil – Lovecraft done with the eye and sensitivity of a poet’

I don’t pretend to represent ‘the reality of publishing’, just a reality, but I hope it’s interesting to anyone who wants to know what it can be like being a professional author. And maybe some folk who read it will be curious enough to pitch in and buy my book. Take care. x