I remember the first time I played Dynamite Düx at the arcade in Weston-super-Mare. A friend and I made it to the Stage 3 end-of-level boss, the rock golem, before finally our fighting spirit and pocketfuls of 10ps ran out. On the bus home I declared it the best game that had ever been made.

Ah, the optimism of youth! In Dynamite Düx you – or you and a co-conspirator – play as Bin and Pin the ducks, off to save their owner/pal/girlfriend Lucy from the evil wizard Achacha. This involves marching through six cartoony side-scrolling worlds, punching and kicking and flame-throwering and grenading and bazooking and water pistolling everything that gets in your way. Hold down the attack button and you can wind up a haymaker, Bin’s arm windmilling and his gloved fist growing bigger and bigger. Fully charged punches whip up a blast of air that damages enemies over a short distance. The trade-off is, you can’t walk while powering up a punch. 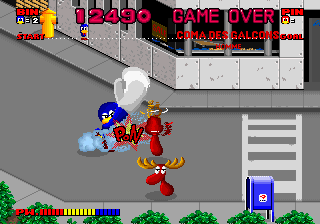 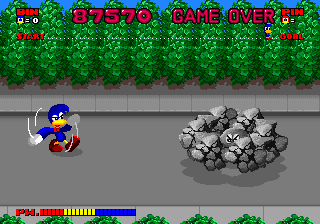 DD was never going to be as good as I remembered it, but it’s certainly fun. The colourful baddies are enjoyable to trounce, at least for a bit. They’re mostly one- or two-hit enemies, so you can mash your way through whole crowds of ’em pretty quickly. The range of weapons available, from rocks that you throw to machine guns, add a nice bit of variation. Every level has a mid-stage boss and an end-of-level dude, although a couple get repeated later on. 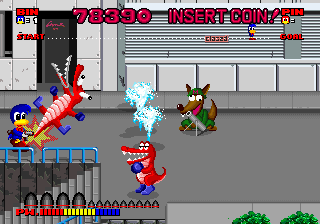 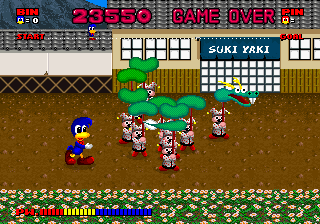 If there’s a central problem with this game, it’s the control system. Lightweight and fun as it purports to be, any game must have responsive controls and sound ludic goals underpinning its technicolor zaniness. Theoretically you’ve got 8-way control of your duck and can punch/attack in all 8 directions, but in practice it’s really hard to direct your attacks. 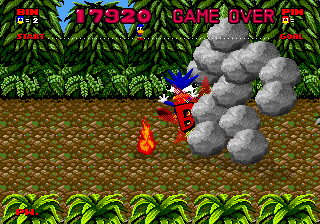 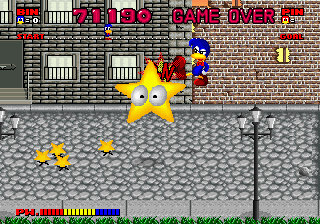 Most 3D sidescrollers only allow attacks on one plane, left-to-right and right-to-left, leading to a tactic familiar to every beat em up fan: approach from slightly above your enemy, so all their attacks miss, then sidestep in at the last minute and hammer the punch button. To its credit, DD tries to rectify this, and shots come from all angles, but it doesn’t quite nail it. When fighting boss battles you’ll often find Bin disappears behind the huge enemy sprite, where it’s hard to figure out which way you’re facing or if you’re taking damage. Suddenly the unorthodox ‘left attack/right attack’ button system of Renegade doesn’t look so crazy. 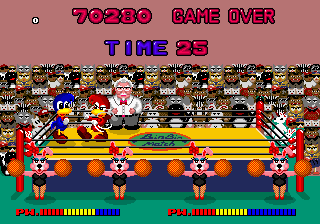 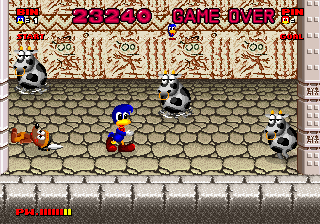 Occasionally between stages Bin and Pin get to duke it out in a boxing ring, neatly combining the three core beat em up genres of 3D sidescroller, Vs and Sports Sim. To be honest, once you’re more than halfway through the game things get a bit lacklustre. Bosses are repeated, most enemy grunts are the same, and even the final showdown with Achacha is just an iron version of the metal golem you fight in Stage 3. It feels like the game was either rushed, or programmers concluded ‘ehh – no one ever gets to the later levels in a beat em up anyway’. 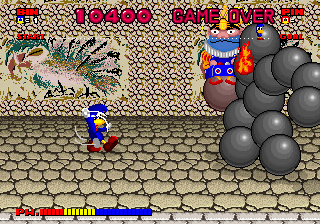 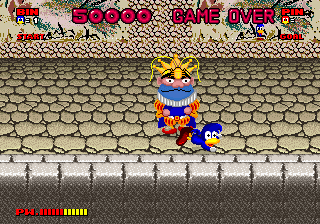 DD saw home releases on the Master System, Speccy, Amstrad, C64, Atari ST and Amiga. The ST version featured a notorious and – at the time – scandalous cheat whereby, if one input the code ‘NUDE’, the game offered a Tijuana Bible version of the game’s intro, written to appeal to shivering pubescent hackers for whom the mere acknowledgement of the existence of reproductive organs is enough to provoke titilated convulsions. 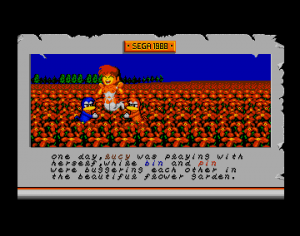 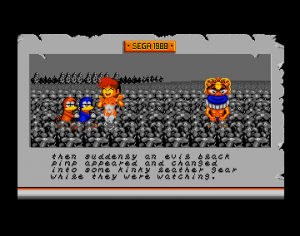 In the first image you can probably just about discern that the damsel of the piece, Lucy, is exposing her tiny pixelated breasts. Bin and Pin are apparently lovers. Note their half-lidded eyes to denote moral turpitude. In the second image, Achacha appears. Despite his character’s clearly being caucausian, the author of this hacked version manages to crowbar in a lazy racial slur, y’know, for the yuks. 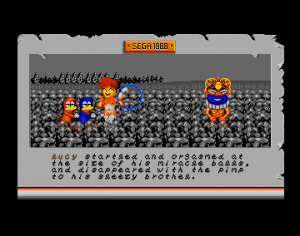 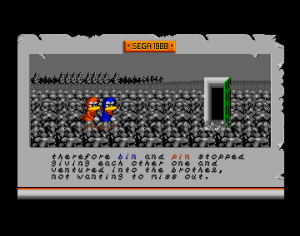 I’m far less offended by the smut and single entendres – I’m looking at you, ‘miracle balls’ – than I am by the misspelling ‘sleezy’. Note that the colour of the portal in the final frame has changed from the red of the arcade to a lime green. Whether this is a wry allusion to seminal (heh) 1972 pornographic movie Behind The Green Door we may never know or care.

I’m writing a whole series of articles on the history of beat em ups. Read ’em.

1 thought on “Welcome To The Fantasy Zone Presents: Dynamite Düx”